In a world where Wi-Fi and Bluetooth are integrated in nearly every electronic device, people are looking to get their homes smartened up – and it’s leaving an impact on the real estate game.

“Smart home and smart features are becoming more prevalent in homes these days. Homes that are being built with smart functions – speaker systems, security systems, televisions, appliances and lights. These are highly sought after functions. They make living so much earlier in the fast-paced world we live in today,” Julie Gans, an agent at Compass Real Estate revealed to FOX Business.

Her views seem to be backed up by numerous studies out there too, examining how technology plays a role in what people are looking for in a future home.

According to a 2016 Smart Homes & REALTORS report conducted by the National Association of REALTORS Research Department, clients are seeking housing that implements smart home technology or is at least compatible with smart home devices.

With such an even demand split to have tech infused with a home, people who want a more futuristic home gravitate toward security, privacy, cost and energy savings to help step things up a notch.

Another interesting finding the study revealed is that the demand for a smart home isn’t being driven by millennials and Gen Z.

The median age of respondents was actually 54-years-old.

Since that survey, the smart home industry has evolved beyond video doorbells and lighting and has extended its reach to virtually every room imaginable. From bedrooms and kitchens to even bathrooms, there is a smart device available for making life tasks easier.

Global consumer spending on smart home gadgets and services is expected to reach $103 billion in 2019 and can grow to $157 billion by 2023, according to a report by research firm Strategy Analytics.

Conversely, it has been projected that 165 million smart home-related units will be sold in North America by 2020, according to market research conducted by analytics aggregator Statista. This estimate is a jump from the 127 million units that were projected for 2018.

Most smart home devices like speakers and security cameras are small and portable enough to be taken from home-to-home, however, larger appliances like air conditioner, fridges and stoves may not be as easy to move – which is more than likely why some new properties are being configured with techy features.

A report from Realtor.com analyzed the websites open listings in 2016 and found that builders and sellers are implementing smart home components to contemporary homes. Ironically, the report found that the top three markets for finding a smart home are in Phoenix, Dallas and New York.

In terms of sales, non-smart homes just as valuable as their tech-forward counterparts according to most real estate professionals.

“There is, of course, a price difference between regular homes and smart homes, but it is not a lot. Generally, all other characteristics remaining constant, the price of the smart home will hover around 5 percent more in terms of price. Depending on the technology it could be as much as 10 percent more, but that would be the maximum,” Evi Kokalari-Angelakis, CEO and Founder at Golden Key Realty told FOX Business.

She added: “In general, smart homes will hold value longer, will sell more quickly, and will save money as the buyer won't have to install themselves.” 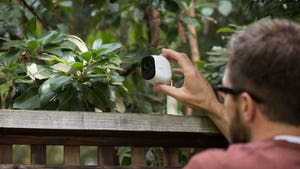 Find out which smart-home security gadgets will protect your prized possessions based on customer reviews.

In her own words, “Homebuyers like to see the latest technology in a home and are willing to spend more for a house with these features to save them the hassle of installing them upon move-in… Video doorbells are becoming the new standard. Homeowners like the security of seeing who is at the door and keeping an eye on packages that could be stolen off the front porch.”

“My buyers do prefer security cameras that are hardwired into the home, rather than battery operated. Leased security systems, like leased solar panels, can make the ownership change a burden, so buyers prefer systems that are owned outright,” de Jong elaborated in reference to what she has seen smart home buyers look for.

Smart homes aren’t exclusive to houses either. Property managers of luxury condos and apartment complexes are recognizing the value of integrating smart home technology, according to a report from real estate news site Propmodo.

“Smart home technology is one of the easiest yet significant differentiators a property can offer across all price points,” the report said. “With the utilization of smart home devices and powerful new engagement platforms, all apartments can now affordably provide an in-demand amenity that drastically upgrades the resident experience and positions a property to reflect the digital age.”

Moreover, a National Multifamily Housing Council/Kingsley Renter Preferences Report that surveyed 250,000 apartment residents in 2017 found that approximately one-third of respondents said they own between five and nine devices that are internet-enabled. It also found renters are willing to pay $30 more per month for select smart devices, such as locks.

Even hip co-living spaces have hopped on the smart home train. For example, the community-focused apartment network known as Roomrs in New York City offers short- to long-term rentals that are equipped with smart appliances. The rents range between $1,000 and $4,000, and tenants get to enjoy neat amenities like voice assistants, keyless entry and smart mattresses.

Outside of traditional housing, smart home technology is playing a role in the lives of the elderly –whether it be through restored independence or advanced retirement communities.

In a report from CNET, a growing number of seniors and their caregivers are opting to outfit homes with sensors and apps that monitor activity and deliver data-filled notifications regarding motion, medication and more.