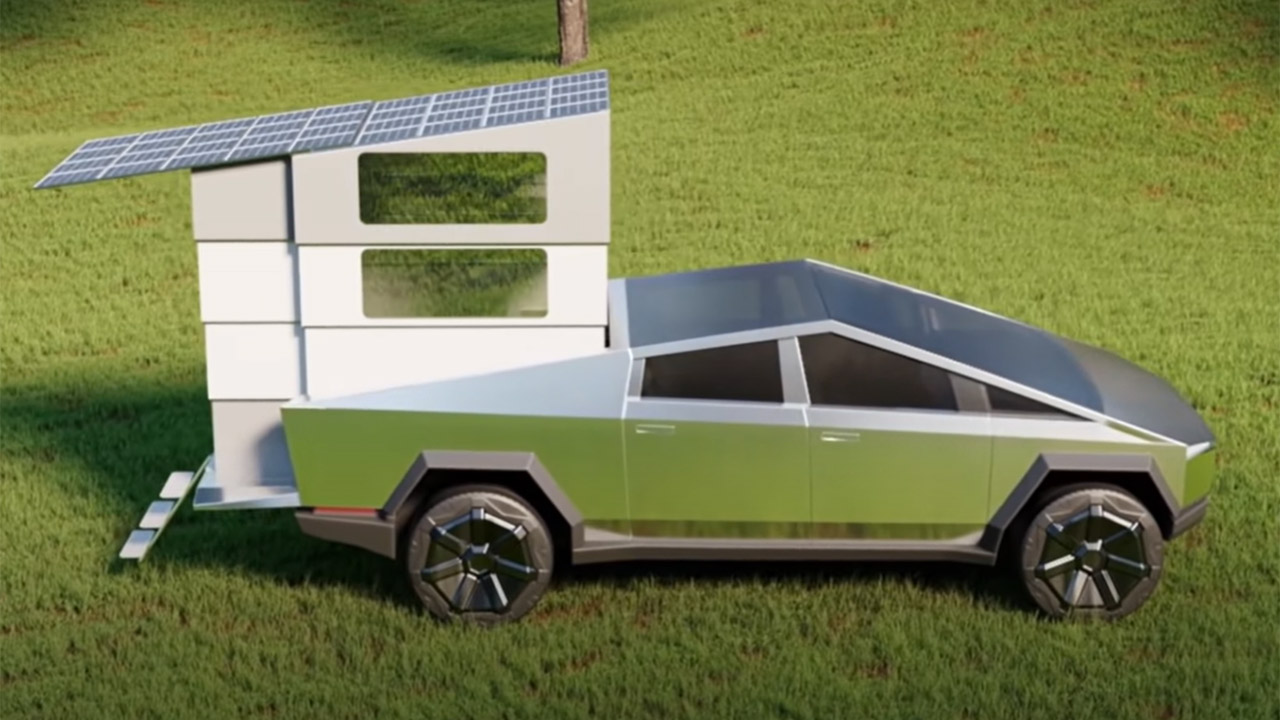 The Tesla Cybertruck is still months away from production, but one startup has already built what could be a multimillion-dollar business on the back of one. Literally.

The Cyberlandr is a pop-up camper designed to fit perfectly within the angled bedsides of the Cybertruck and provide a full living experience.

It has a sink, induction cooktop, dry-flush toilet, shower, TV and two chairs that can be configured into a raised queen size bed with room underneath for two children.

The Cyberlandr is the brainchild of Lance King, a Tesla Model 3 owner with a Cybertruck on order who owns an AI-enhanced video analytics outfit called Stream It. The company makes software products that can monitor video from mass transit vehicles and spaces and do a variety of things with the data, including count customers, verify employee identities and identify weapons.

A transparent view shows the interior layout of the Cyberlander. (Cyberlandr)

It doesn’t make anything like the Cyberlandr, but King has brought on a team of engineers to help develop the idea and is working with Munro and Associates, a manufacturing design firm run by Sandy Munro, who has recently become famous for tearing down and analyzing Teslas on YouTube.

A physical prototype hasn’t been built yet, but King says the telescoping structure will be made of a composite material. He also envisions it being equipped with solar panels, a 360-degree motion-sensing security system, smart appliances and connected technologies controlled by voice commands.

"We understand some people say, well, I don't want technology in my camper, I go camping to get away from that, King told FOX Business.

"But we also understand that there are lots of people who say, well, why can't I stream Bluetooth to the speakers in my RV? Why can't I watch a movie and talk? And so we thought there's probably a set of customers that would like a new approach to all these."

"The market so far has been about five times what we thought it would be. So I think it's a big growing market," King said.

He thinks much of the appeal is how it fits perfectly into the truck when it’s closed up, which means it doesn’t present any storage issues and could lead to it being used more often. Not just for camping, but for more frequent activities like youth sporting events or remote work.

Tesla’s vehicles already have a Camp mode that allows them to provide power and climate control without pollution for extended periods, as long as the battery has a charge, and has proposed its own tent-style bed camper for the Cybertruck.

Tesla has designed a camper module for the back of the Cybertruck.

King hasn’t yet been in direct contact with Tesla about the Cyberlandr, but said he would like to work with the automaker to coordinate the installation of the unit so Cybertruck buyers can have it when their vehicles are delivered.

Even if that doesn’t happen, King is looking to make things easy for customers and is eying up a manufacturing location near the Cybertruck’s Austin, Tex., factory so that customers can pick up their truck and then drop by and grab their Cyberlandr on the way home.