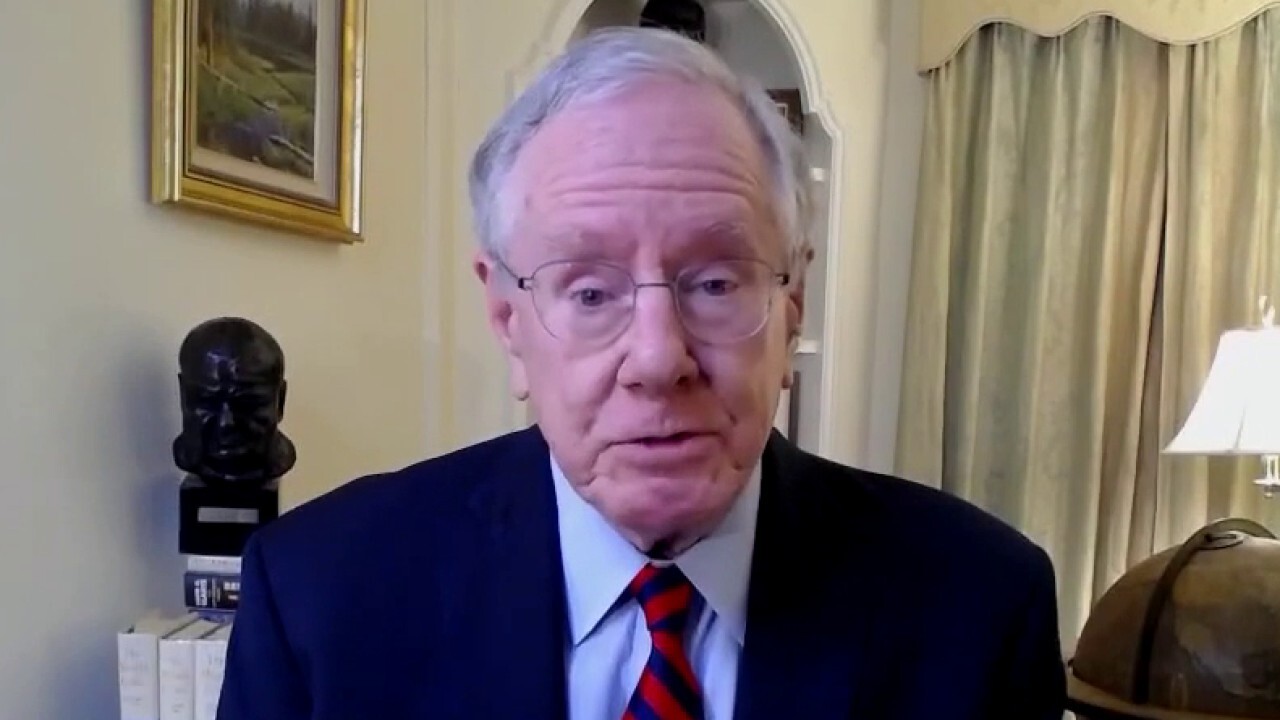 Labor unions are getting stronger under President Biden.

The new president has garnered the support of teachers unions, retail unions, construction unions and more with the promise of better wages, benefits and overall treatment from employers.

Unions have been especially vocal amid the COVID-19 pandemic, making the case for vaccines for frontline workers and teachers; hazard pay; personal protective equipment (PPE) for workers; on-site COVID-19 testing; better child care; better health care and so on.

"Over the next six to nine months, I think you can expect the pace of activity to increase rather substantially," David Burton, senior fellow in economic policy at the Heritage Foundation, told FOX Business of efforts to strengthen unions under Biden.

He continued: "Implementing a new regulation takes time because it has to comply with the administrative procedure act, jump through various bureaucratic hoops, but there's no doubt in my mind that as the Department of Labor, National Labor Relations Board and the [Equal Employment Opportunity Commission] are busily at work revising various rules."

The House of Representatives on Tuesday evening voted to pass the Protecting the Right to Organize (PRO) Act, which Rep. Bobby Scott, D-Va., reintroduced in February after it initially passed in the House in 2019.

"Over the past 70 years, union membership has dropped to the lowest level since just after the National Labor Relations Act (NLRA) was first enacted," Scott said in a statement. "This decline is not a result of workers’ choices. It is plainly obvious that the NLRA is too weak to defend workers’ rights against intensifying anti-union attacks from wealthy special interests."

Burton explained that the bill has about a dozen "important provisions," many of which "are codifying in law Obama-era regulations, but some of them go further than that."

"I think the PRO Act ... constitutes the labor union agenda and has for a long time," he said. "And there's no doubt that the DOL, NLRB and EEOC will be pursuing an agenda that is substantially similar to what occurred ... under Obama, but maybe a little more progressive since the Democratic Party has drifted left since then."

Supporters of the legislation, including President Biden, argue that the PRO Act will help workers fight for and earn fairer wages, benefits and overall better treatment from employees amid the COVID-19 pandemic.

"I urge Congress to send the PRO Act to my desk so we can seize the opportunity to build a future that reflects working people’s courage and ambition, and offers not only good jobs with a real choice to join a union — but the dignity, equity, shared prosperity and common purpose the hardworking people who built this country and make it run deserve," Biden said in a Tuesday statement.

President Joe Biden speaks about the COVID-19 pandemic during a prime-time address from the East Room of the White House, Thursday, March 11, 2021, in Washington. (AP Photo/Andrew Harnik)

Supporters also argue that those who oppose the PRO Act are wealthy corporations and big businesses, but opponents say that's not the case.

Freelance media strategist and award-winning outdoor writer Gabriella Hoffman told FOX Business that she and other freelance workers "will become powerless and unable" to negotiate pay if they "are reclassified as employees and coerced into joining unions."

"Big Labor wants the American public to believe corporations are fueling opposition to the PRO Act. That couldn't be more false," she said. "Sure, there are organizations with big capital and lobbying power out there that do oppose the bill but opposition to this anti-worker bill is largely grassroots-driven."

Those with concerns about the PRO Act say the bill is anti-worker and would threaten U.S. right-to-work laws, which ensure Americans can work specific jobs without having to join unions or pay union dues.

First, the PRO Act opens the potential for increased job losses and terminations across the board; second, the legislation would harm specific working groups like women, who depend on independent work for flexibility; third, the bill poses a threat to independent workers who sought temporary jobs while facing unemployment or a loss of income.

Palagashvili compared the PRO Act to California's Assembly Bill 5, or AB5, which passed in January 2020 and aimed to make all gig workers in California employees. Economists found that the law would kill thousands of jobs, and the state passed a ballot initiative in November called Proposition 22 that scaled back which workers would be recognized as employees under AB5.

"Most of these independent contractors don't want to become employees, but what they do want is access to some sort of portable benefits, like a shared system in which the benefits are not tied to one particular job but can move around with them wherever they go," she said. "Maybe we should be looking more toward those types of solutions."

A Democratic aide from the House Education and Labor Committee previously told Fox News in an email that the PRO Act was "not California AB5" and "does not alter or amend federal or state laws governing wages and hours, unemployment insurance, workers’ compensation, and overtime."

"Rather, the PRO Act codifies the 'ABC Test' in order to determine whether workers are employees for the purpose of union organizing and collective bargaining," the aide wrote, pointing at "over 20 states" have implemented the "ABC Test for some purpose."

Carla Shrive, right, who drives for various gig into companies, joined other drivers to support a proposed ballot initiative challenging a recently signed law that makes it harder for companies to label workers as independent contractors, in Sacramen

The Coalition for a Democratic Workplace, which represents more than 600 major industry organizations including the U.S. Chamber of Commerce, sent a letter to Congress on March 4 saying the PRO Act "would drastically restructure America’s labor laws resulting in economic upheaval that would cost millions of American jobs, threaten vital supply chains, and greatly diminish opportunities for entrepreneurs and small businesses."

The Coalition argues that the bill would threaten workers’ "right to choose whether or not to be represented by a union through secret ballot elections; workers’ right to remove a union that has failed to adequately represent them; ... workers’ right to choose not to contribute to a union they do not support; ... and the government’s ability to prevent unions from expanding a labor dispute with one employer to other businesses and consumers."

The president's campaign raked in just over $232,000 from teachers unions during the 2020 election cycle, according to the Center for Responsive Politics' "Open Secrets" website. The site says the National Education Association (NEA) and the American Federation of Teachers (AFT) "account for practically all" political spending from teachers unions.

Biden initially planned to reopen schools across the country within his first 100 days as president, but that goal evolved into a plan to only partially reopen U.S. schools within his first 100 days. Demands from some teachers unions to keep schools closed until all staff members are vaccinated have slowed the reopening of schools in cities like Los Angeles, San Francisco, Chicago and New York.

A teacher holds up a sign while driving by the Orange County Public Schools headquarters as educators protest in a car parade around the administration center in downtown Orlando, Fla. (Joe Burbank/Orlando Sentinel via AP, File)

The Biden administration's COVID-19 relief package would put $128 billion toward helping K-12 public schools deal with the coronavirus pandemic, but the nonpartisan Congressional Budget Office estimated in February that just $6 billion would flow to schools in 2021.

The CBO estimated that the number would increase to $32 billion in 2022 and 2023, respectively. The rest of the money would be paid out through 2028, according to a cost estimate, which prompted speculation from some politicians and pundits on social media as to why the money was being spread over seven years after the peak of the pandemic.

The comparatively small outlay for fiscal year 2021, which runs through Sept. 30, 2021, is expected because previously allocated money has not yet been spent. A White House official previously clarified to Fox News that the Biden administration will not allocate funding based on CBO projections and that it believes that the funds would be used much faster than CBO assumes.

The Centers for Disease Control and Prevention has said that schools can safely reopen without all teachers being vaccinated, so as long as schools follow other safety measures to prevent the spread of the virus.

"Biden has been close to union leadership for a very, very long time. I don't think this comes as any huge surprise," Burton said.

Biden has said as much himself in November.

"I made it clear to the corporate leaders," the president said during remarks about the U.S. economy in Wilmington, Del., at the time. "I said 'I want you to know I’m a union guy. Unions are going to have increased power.' They just nodded. They understand. It’s not anti-business. It’s about economic growth."