With Google's three-day summit in the rearview mirror, the hypocrisy is not.

The event, designed for A-list celebrities to debate climate change and other issues was held in Siciliy last week, but unfortunately for the tech giant, the social causes are not what garnered the headlines.

Instead, the attendees' gigantic carbon footprints were receiving most of the attention. Attendees even stuck around after the event as backlash directed at the summit mounted.

The Italian press reported the attendees arrived in Palermo by way of 114 private jets.

FOX Business was unable to identify the make and model of those jets, but, for example, the Gulfstream G280, is a midsized jet that boasts "best-in-class fuel efficiency."

A G280 has a long-range cruise speed of 614 miles per hour, meaning it can travel the 6,482 miles in approximately 10.5 hours. The aircraft burns approximately 237 gallons of jet fuel per hour, and 9.57 kilograms of carbon dioxide are emitted per gallon of jet fuel. That means 10.5 hours of flight time would produce 23.8 metric tons of carbon dioxide. 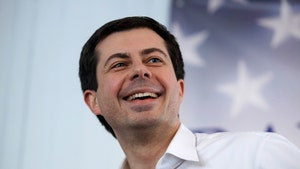 To be clear, Buttigieg isn't the only Democratic presidential candidate hopeful who has voiced support for the Green New Deal while also flying private.

With an average of three passengers per plane, the per person carbon footprint would be eight metric tons, or nearly half of what the average American emits each year, according to the World Bank Group.

And that doesn't even take into account the yachts, which the New York Post says were burning more than 300 gallons of diesel per hour, or the Maseratis.

Here's a look at what some of the attendees of the camp have said in the past about combating climate change:

Prince Harry gave a speech at Google Camp, saying that he will have no more than two children in consideration of the environment. "I’ve always had a connection and a love for nature," he said in an interview with Jane Goodall for British Vogue.

"I’ve always thought: this place is borrowed. And, surely, being as intelligent as we all are, or as evolved as we all are supposed to be, we should be able to leave something better behind for the next generation” he said.

The former president has his own climate change foundation and feels that global warming is the biggest threat to future generations.

In his 2015 State of the Union Address, he said “no challenge — no challenge — poses a greater threat to future generations than climate change." He also tweeted for 2019 Earth Day saying, "Young people all over the world are leading the way in the fight to protect our planet because they know their future depends on it."

Actor Leonardo DiCaprio poses for photographers upon arrival at the premiere of the film 'Once Upon a Time in Hollywood' at the 72nd international film festival, Cannes, southern France, Tuesday, May 21, 2019. (Photo by Joel C Ryan/Invision/AP)

The actor also has a foundation of his own in order to help solve climate change.

In reference to his Fire and Ice Documentary, DiCaprio said, "we wanted to make a film that depicts the beauty of our planet while highlighting much-needed solutions across renewable energy and carbon sequestration. This film does more than show what is at stake if we continue on a course of inaction and complacency — it shows how, with the help of dedicated scientists, we can all fight back. I hope audiences will be inspired to take action to protect our beautiful planet" Dicaprio said.

The engaged celebrity couple has been vocal about their concerns over the environment.

“Droughts, floods, heatwaves and other severe weather conditions are putting children at an increased risk of disease and malnutrition, as well as destroying their families’ homes and livelihoods," Perry declared in a news release issued by UNICEF.

"The worst part about this is that some of the youngest and most vulnerable citizens of our world are bearing the most unfair burden of climate change," she noted.

Her fiancé feels the same.

"The urgency of climate change has never rung louder than it is now," Orlando Bloom said in a 2018 Forbes interview.

"The world is changing, and we need to change our habit along with it. So I would challenge you to think what impact YOU can make and what LEGACY you will leave for your children and grandchildren because I truly believe that each and every individual is capable of creating real and monumental change" he said.

The former singer of One Direction has endorsed a climate change campaign, along with his fellow band members in order to help save the environment. “Young people really do have the power to help end poverty, tackle inequality and stop dangerous climate change," the band said in a statement.

Actress Juliette Binoche and astrophysicist Aurélien Barrau, along with Bradley Cooper and others signed a letter in the French daily Le Monde in 2018, "calling for urgent political action to address the 'global catastrophe' facing mankind and other species.

The letter's mission is to get politicians to act 'firmly and immediately' in tackling climate change and the 'collapse of biodiversity,' which they called the 'greatest challenge in the history of mankind.'"

“It’s not something that can be ignored any longer... Climate change is happening and it is our duty to sit up and make the changes required" actress Priyanka Chopra said.

"The protection of our environment is a cause that I strongly believe in, and I am proud to join so many world leaders and celebrated global personalities in this effort to enhance awareness and create change,” says Priyanka.

Gayle King attends the Time 100 Gala, celebrating the 100 most influential people in the world.
​​​(Photo by Charles Sykes/Invision/AP)

In 2019 Gayle King said "a new poll shows half the Americans think the environment will be worse for the next generation."

She also said the study "found that 59 percent of Americans believe humanity can do something to stop climate change. And that is why we are continuing the tradition started by Walter Cronkite 49 years ago to mark Earth Day."

“Withdrawing from the Paris climate agreement is bad for the environment, bad for the economy, and it puts our children's future at risk,” Zuckerberg wrote in a Facebook post in 2017.

“For our part, we've committed that every new data center we build will be powered by 100% renewable energy. Stopping climate change is something we can only do as a global community, and we have to act together before it's too late" Zuckerberg highlighted.