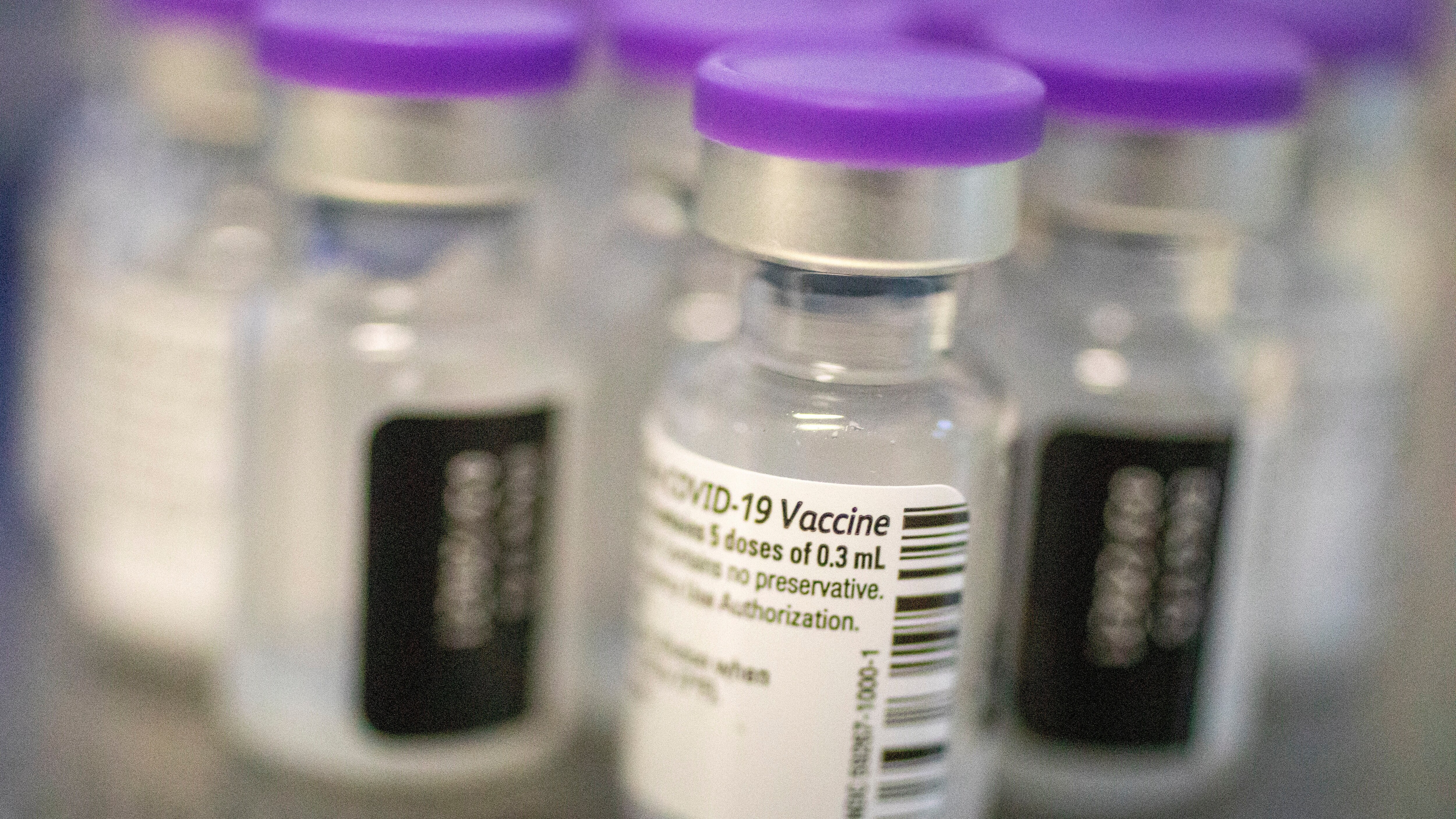 The maker of the West's first Covid-19 vaccine is building a new manufacturing alliance that could throw Europe and the rest of the world a lifeline amid a painful shortage of shots and a rebound in infections.

BioNTech SE, a German company that joined with Pfizer Inc. to manufacture and distribute its vaccine, has marshaled an alliance of 13 companies, including Novartis AG, Merck KGaA and Sanofi SA, in an effort to meet -- and perhaps exceed -- an ambitious target of making two billion doses of vaccine this year.

The European Union has been struggling with a shortage of vaccines as manufacturers, including British-Swedish pharmaceutical firm AstraZeneca PLC, have fallen behind on their delivery pledges to the bloc.

The shortage has largely been limited to the EU, which was slower than its Western allies in ordering and approving the vaccines, and it has raised tensions between the bloc and the U.K. and the U.S.

This could pose a challenge to BioNTech's alliance. Its vaccine uses sophisticated new techniques that require scarce ingredients and expertise. This makes for a delicate supply chain that is vulnerable to the type of export controls the EU, the U.K. and the U.S. have imposed in recent months, company officials have warned.

Pfizer and BioNTech developed the first Covid-19 vaccine authorized in the West in record time, but its complex manufacturing has left the U.S. giant struggling to meet production targets.

BioNTech's response: An alliance designed to jolt production of the vaccine and speed up vaccinations in Europe and elsewhere. The negotiations for the new manufacturing alliance were coordinated with Pfizer, according to a BioNTech spokeswoman.

The cancer-research firm, based in the small German town of Mainz, came up with the vaccine based on the innovative messenger RNA technology in February 2020, and then teamed up with Pfizer to test, produce and market it around the globe.

The vaccine was authorized in Europe and the U.S. in December after trials showed it was highly effective at preventing infections in adults. On Thursday, a real-life study by Israel showed that the shot was also 94% successful in stopping asymptomatic transmission.

Yet despite their successes, Pfizer and BioNTech have struggled to make enough of the vaccine to satisfy demand, causing growing frustration around the world at the pace of delivery -- a bottleneck BioNTech's new manufacturing alliance now aims to alleviate.

After months of negotiations, the company has now assembled a web of companies, most of them in Europe and some key rivals to Pfizer. BioNTech said it was confident the alliance would allow it and Pfizer to meet their goal of producing two billion doses in 2021.

BioNTech SE has marshaled an alliance of 13 companies in an effort to meet -- and perhaps exceed -- an ambitious target of making two billion doses of vaccine this year. (AP Photo/Ariel Schalit)

Millions of doses have also been sold in undisclosed contracts with Middle Eastern and other countries, and 40 million have been sold to Covax, an international initiative to provide vaccines to developing countries. Demand is set to keep growing.

Pfizer, a company going back nearly two centuries that employs around 100,000 people, currently makes 50% of the active ingredient for all doses, a spokeswoman said, with the other half produced by medium-size BioNTech. A BioNTech spokeswoman said the company was in fact producing 60% of the output.

Pfizer, which had no mRNA production capacity before its deal with BioNTech, took longer than expected to set up plants at its sites in Kalamazoo, Mich., and Puurs, Belgium, according to the companies.

A Pfizer spokeswoman blamed the delays on the need to put together a supply chain for raw materials, adding that the company had since scaled up production at an unprecedented pace.

In October, Dr. Sahin and other BioNTech executives opened negotiations with other companies, weeks before Pfizer and BioNTech released the final data from their final-stage trials showing that the vaccine was more than 90% effective in preventing infections.

HERE'S HOW MUCH MONEY PFIZER, MODERNA AND JOHNSON & JOHNSON COULD MAKE FROM COVID VACCINES

Days later, the companies quietly notified authorities in the U.S. and elsewhere that they would slash the delivery target for 2020 from 100 million to just 50 million. For the U.S., this meant that Pfizer would deliver only 20 million instead of 40 million doses by December.

The Kalamazoo factory was meant to supply the U.S. while the Puurs site would cater to the rest of the world. Still, some of the initial 20 million doses that the company supplied to the U.S. came from Europe, according to the companies.

A refrigerated truck drives out of the Pfizer Manufacturing plant in Puurs, Belgium. (AP Photo/Virginia Mayo)

In January, Pfizer launched a major upgrade of its Puurs facility. The upgrade paused production for two weeks, worsening Europe's vaccine shortage and prompting some governments to threaten Pfizer with legal action.

Sierk Poetting, BioNTech's chief operating officer, said the experience had demonstrated to BioNTech the urgency of launching a new manufacturing alliance, in order to live up to commitments in Europe and other markets.

BioNTech is increasing its own production. Its German factory, expected to come on line in April, should produce 750 million doses a year. The facility will mainly supply the EU, but its output won't be enough, so BioNTech had to enlist new partners across the supply chain, said Mr. Poetting.

The BioNTech-Pfizer vaccine uses mRNA packaged in a microscopic ball of fat to elicit an immune response. Such vaccines can be produced faster than conventional shots, but the process is sophisticated, with new partners now involved at each step of the process.

The mRNA is first produced, then purified, concentrated and filtered. BioNTech has brought in German company Rentschler Biopharma SE to help with these steps. Swiss company Novartis is also negotiating a contract to produce DNA molecules used in the first step.

In the next step, the mRNA is encased in its fatty envelope. The lipids are supplied by the German firms Merck and Evonik Industries AG, while Austria's Polymun Scientific Immunbiologische Forschung GmbH, Canada's Acuitas Therapeutics Inc., and Germany's Dermapharm Holding SE are helping with the formulation.

The BioNTech-Pfizer vaccine uses mRNA packaged in a microscopic ball of fat to elicit an immune response. (AP Photo/Gerry Broome)

During the final step, the solution is filtered again and filled into vials, a process known as finish and fill. This will be done by Delpharm SAS, a French company; Siegfried AG; Baxter Oncology GmbH from Germany; Novartis, Dermapharm and Sanofi.

BioNTech's European alliance will produce about half of the global active ingredient supply for the Covid-19 vaccine, and it will cover around 20% of the finish and fill for each dose, Mr. Poetting said.

While BioNTech is confident the alliance will allow it to meet demand, the number of partners, the complexity of the process, and the raw materials required -- from DNA to enzymes, salts, sugars and various lipids -- make the supply chain delicate, with many opportunities for bottlenecks.

Right now, the scarcest ingredients are the lipids used to deliver the vaccine's RNA. These are produced by a handful of companies and the shortage is compounded by the fact that vaccine-makers use a similar technology and rely on the same suppliers.

"This is the ultimate bottleneck at the moment...the lipids are the hand-to-mouth issue," Mr. Poetting said.