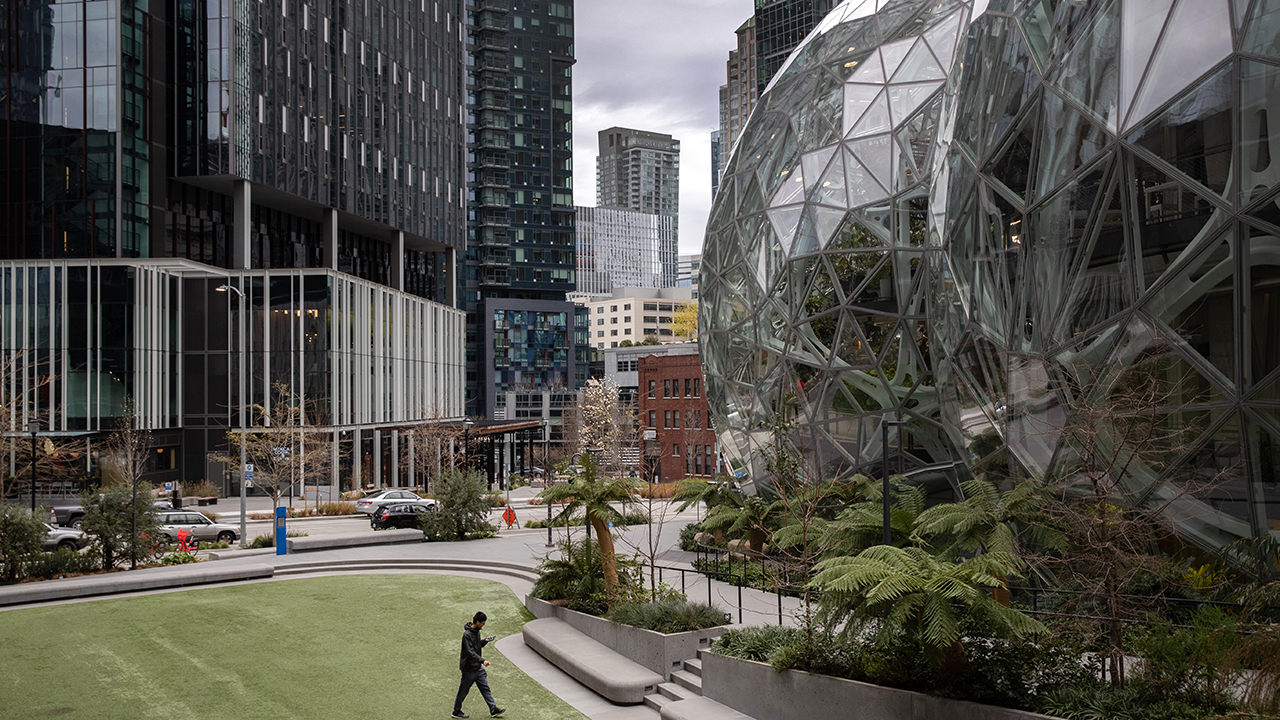 Amazon is taking steps to allow employees at its Seattle-based headquarters the option to work outside the city, weeks after a new local employer tax was passed and the coronavirus pandemic impacts corporate office plans.

The company sent out a message to employees in Seattle on Thursday, asking which communities near the city they would prefer.

"GREF (Global real estate and facilities) is always exploring real estate options to support our diverse and growing population, and is considering new locations in the Puget Sound region (in addition to Seattle and Bellevue)," the message read, according to a copy obtained by USA Today.

Amazon its taking steps to allow employees at its Seattle-based headquarters the option to work outside the city. (Toby Scott / Echoes Wire/Barcroft Media via Getty Images)

The poll was also obtained by KTTH's Radio's Jason Rantz.

Amazon, which employs around 50,000 people in Seattle, announced in February it planned to create more than 15,000 jobs in the Seattle suburb of Bellevue, where it opened its first office tower in 2017.

Bloomberg first reported on Thursday that Amazon has considered building more satellite offices outside of Seattle city limits before the pandemic. The coronavirus pandemic and shift to work from home has caused many businesses to re-evaluate their corporate office space.

The Amazon headquarters sits virtually empty on March 10, 2020 in downtown Seattle, Washington. In response to the coronavirus outbreak, (Photo by John Moore/Getty Images)

Amazon recommended all employees in its Seattle headquarters to work from home as the pandemic struck in March, leaving much of downtown nearly void of people.

Another Puget Sound company, outdoor retailer REI, announced last week it was walking away from its new corporate campus in Bellevue with an intention to shift to a "less centralized approach" for its presence in the Seattle area.

Amazon around 50,000 people in Seattle, where its world headquarters is based. (Getty Images)

But KTTH-Radio reported that Amazon is getting tired of attitudes by the Seattle City Council towards the company, including another tax passed earlier this summer.

Seattle's City Council passed a tax measure in July where businesses with at least $7 million in annual payroll expenses will be taxed 0.7% to 2.4% on the amount they pay Seattle-based employees, with tiers based on individual salary amounts above $150,000.

The tax would also "fund social housing and the Green New Deal in order to address the city’s critical housing emergency and the climate crisis," Councilmember Kshama Sawant wrote in an April press release. It would also raise funds for construction and renovation projects that could "create and support thousands of well-paying union jobs in the years ahead."

An Amazon employee speaking on the condition of anonymity told KTTH on Friday after this summer's violent protests, constant political attacks on the company, and the new tax has created conditions that "would definitely" have them looking elsewhere than Seattle.

Graffiti reads "Death to Bezos" on the boarded up window of the Amazon Go grocery store in reference to Amazon founder and CEO Jeff Bezos, Sunday, July 19, 2020 in Seattle. Protesters broke windows at the store earlier in the afternoon. (AP Photo/Ted S. Warren)

“Amazon seems to be evaluating its options for moving out of Seattle if necessary,” the employee told the Jason Rantz Show on KTTH. “I think it’s clear to anyone living in Seattle that our local officials know only how to blame others for problems that our city’s public policy has created. Amazon’s success in spite of the failures of Seattle’s city government make Amazon an easy target when looking for someone to blame.”

The Seattle Times reported that an Amazon source downplayed the reports of moving out of Seattle, saying that Amazon workers were only asked about other work locations as part of a routine survey.

Amazon did not immediately respond to an inquiry from FOX Business.