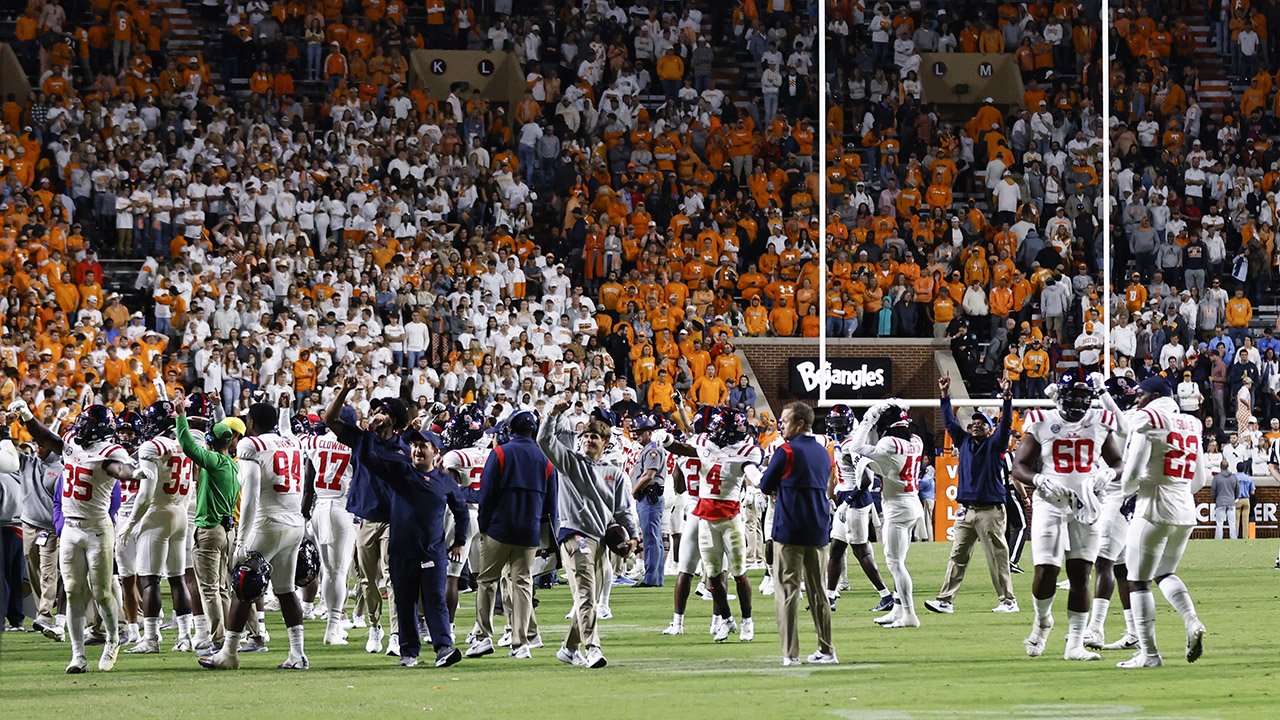 The SEC fined Tennessee hundreds of thousands of dollars on Monday in the wake of an incident during Saturday’s game against Ole Miss when fans threw trash onto the field in anger over a call.

The band and cheerleaders were forced to leave the field while Ole Miss players had to step away from the sidelines to avoid getting hit with debris. Ole Miss coach Lane Kiffin was hit with golf balls and a water bottle was thrown at him while he was being escorted off the field after the game.

Oct 16, 2021; Knoxville, Tennessee, USA; Debris is seen on the field after fans threw objects onto the field during the second half of a game between the Tennessee Volunteers and Mississippi Rebels at Neyland Stadium. (Bryan Lynn-USA TODAY Sports / Reuters Photos)

"The disruption of Saturday night's game is unacceptable and cannot be repeated on any SEC campus," SEC Commissioner Greg Sankey said in a news release. "Today's actions are consistent with the oversight assigned by the membership to the SEC office, including the financial penalty and review of alcohol availability. We will use this opportunity to reemphasize to each SEC member the importance of providing a safe environment even with the intensity of competition that occurs every week. We will also reengage our membership in further review of the alcohol availability policy to consider additional measures for the sale and management of alcohol while providing the appropriate environment for collegiate competition."

Mississippi players stand on the field after the game was delayed because of fans throwing bottles onto the field during the second half of the team's NCAA college football game against Tennessee, Saturday, Oct. 16, 2021, in Knoxville, Tenn. Mississi (AP Photo/Wade Payne / AP Newsroom)

Tennessee was assessed a $250,000 fine along with other penalties under the conference’s sportsmanship, game management and alcohol availability policies. The SEC said the money will be "deducted from the university’s share of SEC revenue distribution."

Additionally, the SEC said Tennessee will:

Oct 16, 2021; Knoxville, Tennessee, USA; Fireworks burst as the National Anthem is played before a sold out crowd for a game between the Tennessee Volunteers and Mississippi Rebels at Neyland Stadium.  (Bryan Lynn-USA TODAY Sports / Reuters Photos)

According to the University of Tennessee Police Department, 18 arrests and 47 ejections were made at Neyland Stadium.

A Tennessee spokesman told the Knoxville News Sentinel that more security cameras could be added to the stadium near the student section.

"We are trying to identify people who threw things onto the field last night in order to hold them accountable," Chancellor Donde Plowman told the newspaper. "Further, athletics is working with UTPD and the Division of Student Life to provide recommendations to me and (athletics director) Danny White related to preventing and deterring bad behavior in the stadium, particularly in our student section."