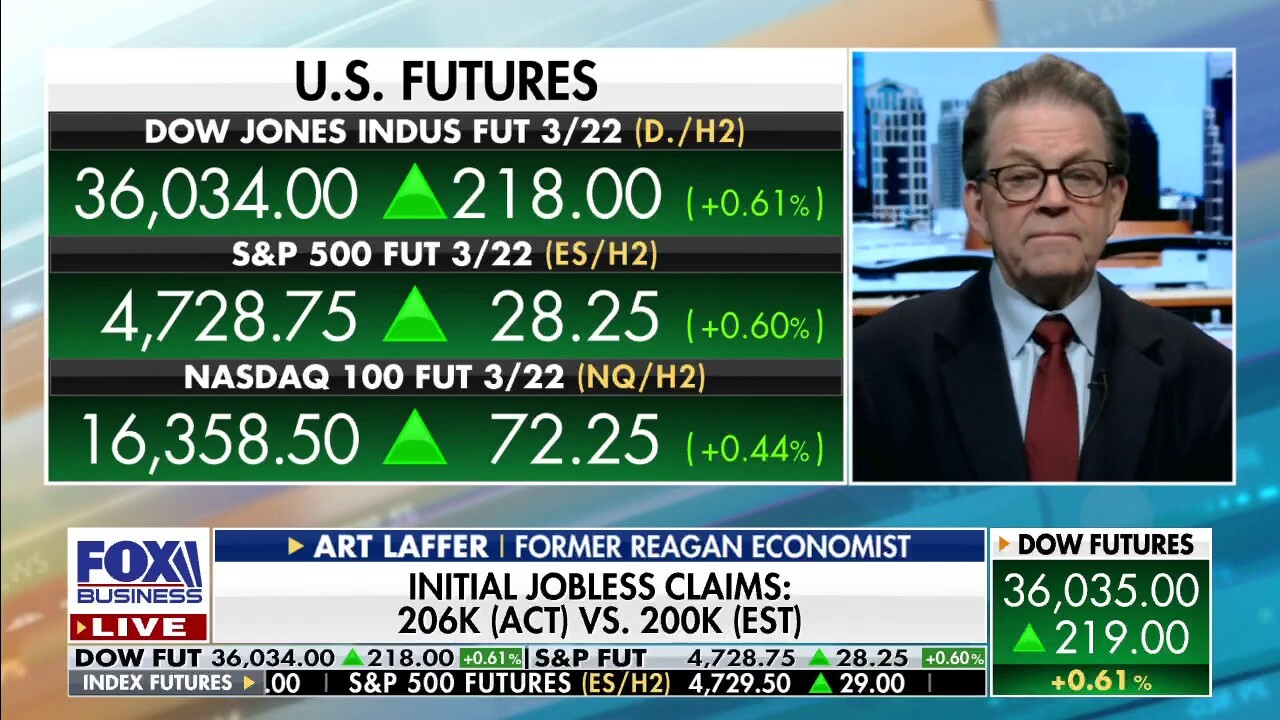 Build Back Better will cause people to leave the labor force: Art Laffer

It is said that time is undefeated.

Congressional Democrats grappled with that phenomenon as they attempted to move the $1.75 trillion "Build Back Better" bill through Congress — before Christmas.

The bill is not dead. It may just need more time.

But passing the bill before Christmas? Perhaps, "See you next year."

The goal was for Senate Democrats to slide the bill through the Senate just before Dec. 25. But the bill still isn’t complete. Democrats are still trading legislative proposals. Vetting on specific language continues with the Senate Parliamentarian to see what comports with special budget rules for this bill. Sen. Joe Manchin, D-W.Va., is again requesting a "pause" on the social spending package as inflation spikes.

There are a lot of things Manchin may want in or out of this bill. But the one thing Manchin appears to have achieved is in fact, a "pause."

The sands of legislative time were slipping through the neck of the political hourglass on the Build Back Better bill long before we got the question about passing the bill before Christmas.

This was an arbitrary deadline. And if the bill isn’t done by Christmas, Democrats could face a host of problems.

More things can go wrong the longer the bill sits out there. Don’t forget that this unfolds against the backdrop of a 50/50 Senate during a pandemic. The Senate lacks remote voting like the House.

Senate Democrats need all 50 of their members healthy and ready to vote in person if and when this bill ever comes to the floor – this December or next December. Anything short of that likely kills the bill – regardless of where Manchin stands.

Year-end deadlines on Capitol Hill are a gambit by Congressional leaders to force action. If they don’t set a timetable, issues drag on forever. So, "Christmas" served as the backstop for 2021. Remember that Democrats have spoken about passing this bill since the spring. There was one point where this was supposed to zip through Congress over the summer. September at the latest.

And here are the lawmakers, wondering if they can lug the bill to passage, amid the tinsel and eggnog.

BIDEN'S BUILD BACK BETTER IS ‘ONE OF THE WORST BILLS IN AMERICAN HISTORY’: REP FLEISCHMANN

It’s kind of like what Will Farrell said as "Buddy" in the Christmas classic "Elf." Buddy described his perfect day around the holidays: "First we make snow angels for two hours. And then we’ll go ice skating. And then we’ll eat a whole roll of Tollhouse Cookie Dough as fast as we can."

It’s unclear if the Congressional Budget Office could "score" any of those activities.

So, the Christmas deadline thing may not have worked.

"Members often like to finish legislative work by Christmas just because Congress needs a deadline. If legislation is open-ended, it's never going to pass," said Darrell West of the Brookings Institution. "So (Senate Majority Leader Chuck) Schumer, D-N.Y., has tried to impose a Christmas deadline just to force action on the part of the Senate. But there's nothing magical about that timeline."

Not even the magic of Christmas.

That’s where West notes that Democrats know they are playing with fire if this bleeds into the new year.

"(House Speaker Nancy) Pelosi’s, D-Calif., problem is she promised her Democratic members action by a certain date, and the longer we go beyond that date, the more restless they're going to be," observed West. "She has a very, very narrow margin of passage in the House if just a handful of individuals go off the reservation that could torpedo the legislation from outside."

If the Senate approves the plan, it’s a near certainty the package will vary significantly from what the House approved earlier this fall. That means the measure must go back to the House to sync up. It’s likely the House must accept whatever the Senate sends its way. The question is whether the House can accept a Senate-approved bill - rife with changes to comport with Senate budget rules. Or, to put it more starkly, a bill which many liberals may consider "watered down."

I questioned Pelosi last week about how "expeditiously" the House could pivot and approve the Senate bill.

"(Do) you get it back and you can move this through before the holidays? Or do you think this needs some time to massage in the new year because that’s going to be a different product and some members are going to have to evaluate it?" I asked Pelosi.

The Speaker was having none of it. No talk of January. No talk of post-Christmas. "All of your questions are always about what you’re going to do for the holiday," replied Pelosi. "We are on our path to get the job done for the American people. And we feel very confident. And it would be my hope that we would have this bill done before the Christmas vacation."

Even if that were to happen, Pelosi needs a DeLorean equipped with a flux capacitor.

But the House now appears to be gone for the year.

Democrats would begin to lose focus or energy may wane for the bill if Pelosi said anything about January or "after Christmas." So Pelosi keeps attention focused – for now – exactly on the task at hand: pass the bill before Christmas – even if that may never happen.

"This is called the legislative process," the Speaker said about the delay. "I’m still hopeful that it will pass. I’m not going to have a postmortem on something that hasn’t died."

But doing something by the holidays?

"We aim to pass it before Christmas," said Schumer a few weeks ago.

"My goal is to have the Senate debate and take action and pass the President’s Build Back Better legislation before we hit Christmas day," Schumer opined.

But few saw how they could finish this right away.

Schumer doesn’t have the votes - even to launch a debate on the bill.

And, a delay will drive progressives, especially in the House, batty. That’s to say nothing of House Democratic moderates who already voted for the bill a few weeks ago. They will be apoplectic if this bill never makes it through the Senate and they walked the plank in the House. Don’t forget that many moderate Democrats voted for the "cap and trade" climate bill in 2009 - and the bill never saw the light of day in the Senate.

Democrats are pivoting - at least verbally - to an effort to pass voting rights. But chances there aren’t much better.

Senate Democrats can’t actually change the Senate rules to break a filibuster just to get to a debate on a formal rules change. That requires 67 yeas! So be wary when you hear senators say they are opposed to changing the filibuster "rule." But, they could try to do a "precedent" change in the Senate to create a special carve out for filibusters - specifically on voting rights legislation. Such a gambit is much easier and only requires 51 votes. And, in fact, the Senate conducts much of its business based on "precedent" rather than its standing rules.

This maneuver would mirror other precedent changes for the filibuster brought on by Nuclear Option I in 2013 for executive branch nominees and Nuclear Option II in 2017 for Supreme Court nominees. But Democrats need 51 votes to establish a new precedent to break a filibuster on voting rights. And so far, Democrats lack the votes on that score as well.

So, it’s possible talk about the voting rights bill could just be an effort to distract the Democratic base toward another shiny object – especially if they punt on the Build Back Better bill. This could also be a dual-track approach to apply pressure on Manchin.

Not that these pressure campaigns have worked on Manchin yet.

Time is a bandit. It robbed Democrats of possibly passing the social spending plan before Christmas.

The Senate hasn’t defeated the Build Back Better bill yet. But it’s likely "defeated" for this year by the most powerful adversary in the universe: time.