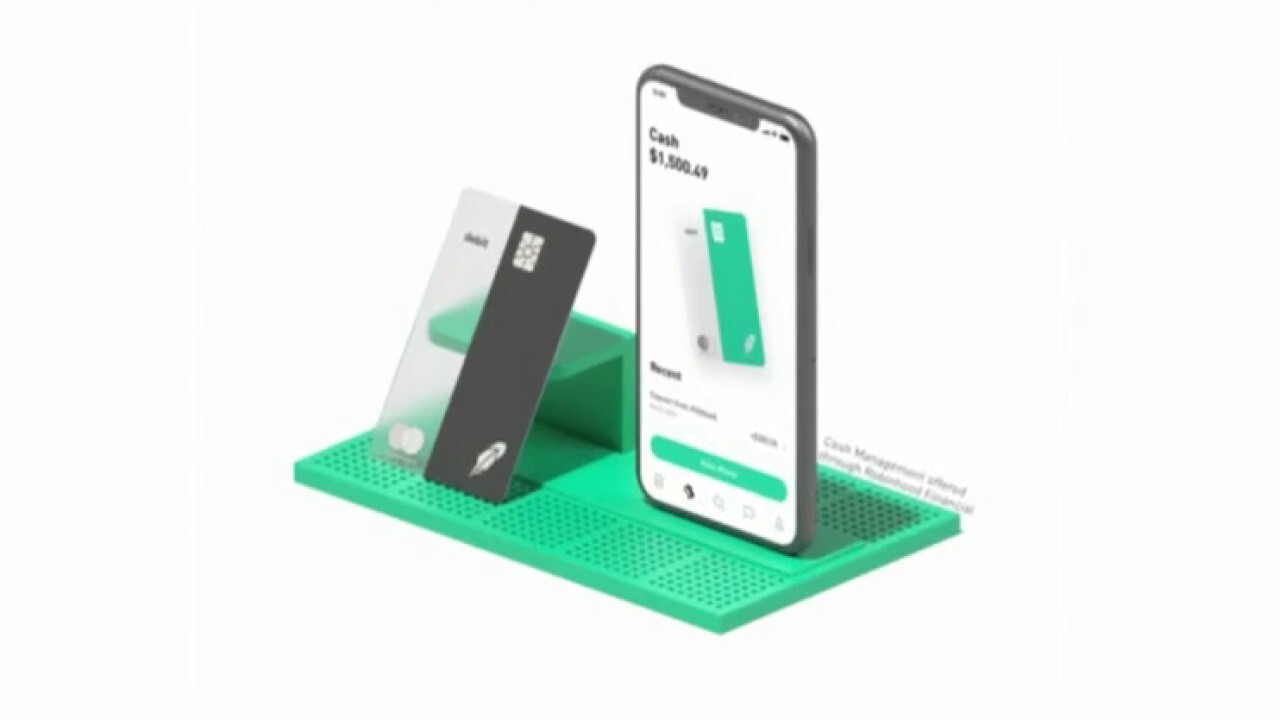 Robinhood's initial public offering will officially debut on Thursday when the company begins trading on the Nasdaq under the ticker symbol HOOD.

According to the investment platform's S-1 prospectus filing with the Securities and Exchange Commission, Robinhood will sell up to 55 million shares between $38 and $42 apiece. At $42 per share, the Menlo Park, California-based company could be valued as much as $35 billion.

Here's a FOX Business roundup of what you need to know about the popular and controversial trading app ahead of its upcoming IPO.

Robinhood's mission is to "democratize finance for all" by offering commission-free trading on individual companies, options and ETFs. In addition, the company also offers cash management accounts and cryptocurrency trading.

It is also considering offering retirement accounts, according to CEO Vlad Tenev.

To date, Robinhood has a total of 17.7 million monthly active users and manages more than $80 billion in assets. As for its finances, Robinhood reported total revenue of $522 million for the three-month period ending March 31, 2021, a 309% increase from $128 million a year ago. It also reported a net loss of $1.4 billion, including a $1.5 billion fair value adjustment to its convertible notes, compared to a previous loss of $53 million during the same period a year ago. In 2020, Robinhood’s revenue surged 245% year over year to $959 million, with net income of $7 million, up from a $107 million loss the year prior.

The company has said it plans to reserve up to 35% of its IPO for its customers.

Looking ahead at the second quarter, Robinhood estimates revenue between $546 million and $574 million and a net loss between $487 million and $537 million. It also forecasts a total of 21.3 million monthly active users.

Robinhood was founded in 2013 by Vladimir Tenev and Baiju Bhatt.

After graduating from Stanford University in 2008, the pair moved to New York and built two finance companies, selling trading software to hedge funds, according to Robinhood's website.

Tenev and Bhatt later learned that Wall Street firms pay effectively nothing to trade stocks while charging everyday Americans a commission fee for each trade. With this knowledge, they moved to California two years later where they went on to create Robinhood in an effort to expand access to the financial markets.

Ahead of Robinhood's IPO, Bhatt and Tenev have each amassed fortunes of $1 billion, according to real-time net worth tracking by Forbes.

The IPO may further narrow who its closest rivals are.

Charles Schwab estimates that U.S. retail investors have total assets of approximately $50 trillion. Robinhood noted in its S-1 filing that over half of its users are first-time investors.

Despite Robinhood's rise in popularity since 2013, the company has faced a wave of legal trouble in the past year, some of which contributed to a record $70 million fine in June to settle Financial Industry Regulatory Authority allegations that the company misled investors about margin trading and was lax in its oversight of approvals for options traders.

Earlier this year, Robinhood made the decision to restrict trading on as many as 50 stocks, including the popular meme stocks, GameStop and AMC Entertainment Holdings. The move was made after a surge in trading volume strained its abilities to cover clearinghouse deposit requirements. The company was forced to raise $4 billion from early investors in order to meet the requirements.

Since then, Robinhood has faced several congressional hearings to assess the chaos and whether or not the firm colluded with select hedge funds, which Tenev has denied, as well as over 50 putative class lawsuits and three individual actions filed against the company in various federal and state courts. Two of the class action complaints have been dismissed voluntarily with prejudice, according to Robinhood.

The company has received requests for information, and in some cases, subpoenas and requests for testimony, related to investigations and examinations by the U.S. Attorney’s Office for the Northern District of California (USAO), the Department of Justice's Antitrust Division, the SEC, FINRA, the New York Attorney General’s Office, other state attorneys general offices and a number of state securities regulators. A search warrant was also executed by USAO to obtain Tenev's cellphone.

"We are cooperating with these investigations and examinations," Robinhood added. "Due to the preliminary nature of all of these proceedings, we are unable at this time to estimate the likelihood or magnitude of any possible losses related to these matters."

The SEC charged Robinhood with misleading investors on how it made money and for failing to get the best price for customer orders. Robinhood has not admitted or denied wrongdoing, but it agreed to pay a $65 million settlement in December.