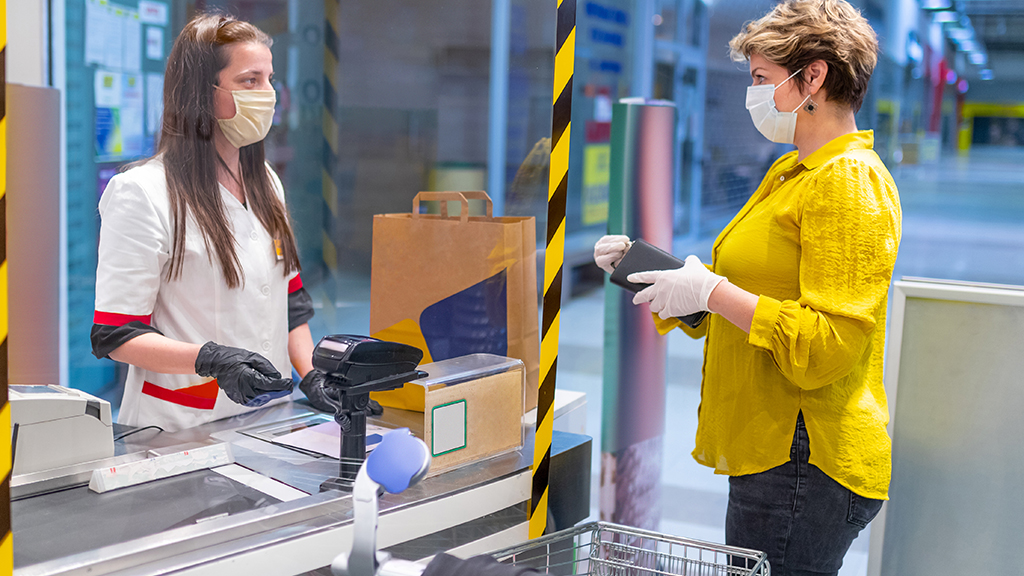 As the world attempts to return to a kind of normal in the midst of the coronavirus pandemic, plexiglass has become essential.

Many grocery stores and pharmacies have already installed the clear panels at checkout registers, but plexiglass is popping up elsewhere, like restaurants, bathrooms and offices, according to business publication Marker.

The partitions can help businesses reopen and operate under safer conditions by providing a clear barrier between people in places where social distancing is difficult.

Here’s what else you need to know about plexiglass.

Plexiglass -- also called acrylic -- is a petroleum-based thermoplastic, according to Glass Doctor.

Made from poly(methyl methacrylate), plexiglass is known “in the industry” as PMMA, Marker reported.

The material is shatter-resistant, lightweight and cheaper than glass, according to the publication.

Plexiglass was developed by different scientists in laboratories around the world in the late 1920s and early 1930s, according to Glass Doctor.

One of the most well-known versions, Plexiglas, was created by German chemists in 1933 and hit markets three years later, according to the manufacturer’s website.

“Plexiglass is made via polymerization — the monomer methyl methacrylate (MMA) reacts with a catalyst and is then molded into sheets,” Marker reported.

Sheets of plexiglass can be bought on Amazon, Home Depot and plenty of other places.

GILEAD SCIENCES: WHAT TO KNOW ABOUT THE BIOPHARMA COMPANY WORKING FOR A CORONAVIRUS CURE

What is plexiglass used for?

Plexiglass has a long list of uses, including sound barriers, aquariums, display cases, brochure holders and picture frames, according to Professional Plastics.

It is preferred in medical settings, according to Marker, because it is very resistant and doesn’t get damaged by cleaners.

Now that companies are trying to reopen safely, plexiglass could be used as partitions between desks in offices, between sinks in bathrooms and between restaurant booths. They are also in nail salons, separating employees from customers, in senior living homes and in movie theaters, Marker reported.

The transparent barriers will even be in casinos, FOX Business previously reported.

There are several companies that make plexiglass, but two of the largest are Rohm, which makes Plexiglas, and U.K.-based Perspex, Marker reported.

Other major brands include Acrylite, Lucite, Polycast, Optix and Chemcast, according to plastic distributor OCIP.

How has the coronavirus affected the plexiglass business?

The coronavirus has created a high demand for plexiglass -- and the industry is trying to stay on top of it, Marker reported.

In March, Plexiglas said in a press release that it “scaled up production” after demand for its product rose “sharply.”

Perspex told Marker its acrylic sheet production is up 300 percent from February to March to meet demand.

Plexiglass barriers have been installed in grocery stores and pharmacies already and are likely to be installed elsewhere as businesses prepare to reopen safely.

Retailers are also feeling the demand. The manager of one plexiglass retailer in California told Marker his company’s sales are up more than 200 percent from last year.

The biggest problem for manufacturers, according to Marker, is being able to make sheets of plexiglass fast enough.

To help meet demand, some are turning to similar products made with polycarbonate (PC) and polyethylene terephthalate-glycol (PET-G), which can also work as protective shields, Marker reported.

Like the rest of the economy, there could still be negative long-term impacts for the plexiglass industry as construction projects are postponed and retailers are closed because of the coronavirus, according to Marker.