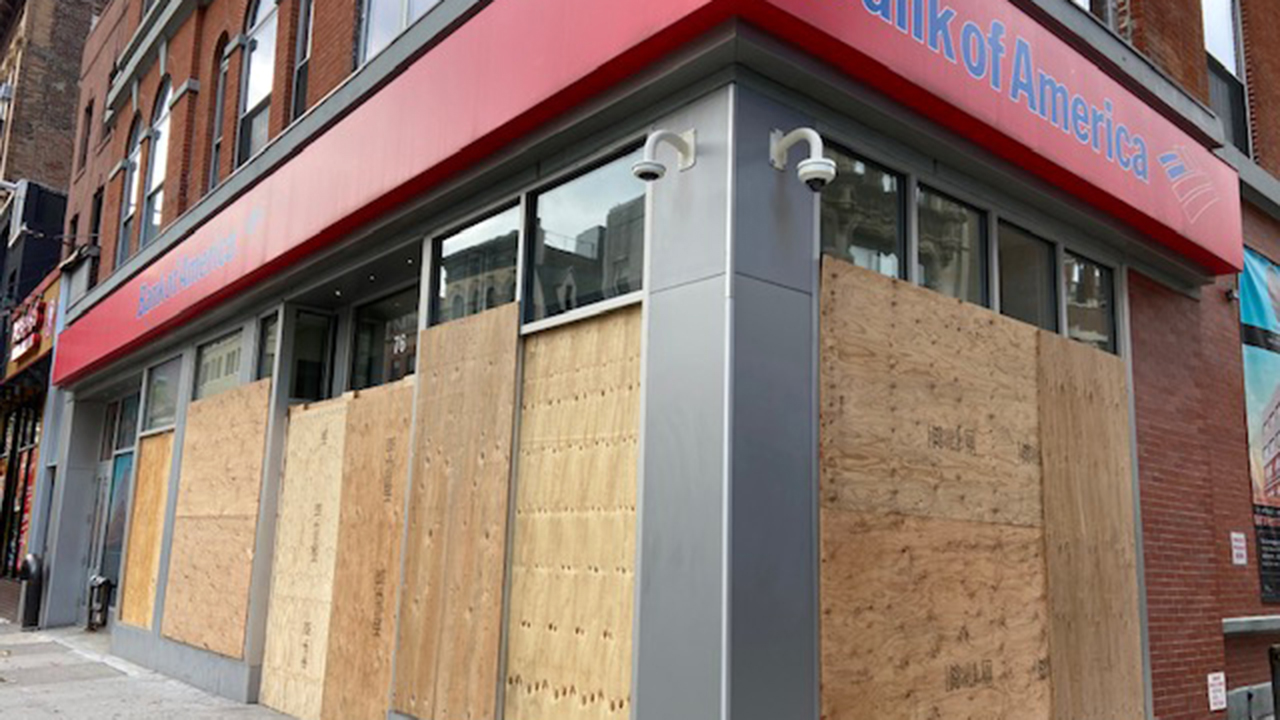 Like droves of businesses around the nation, some of the country's largest banks are bracing for the possibility of protests or riots that may occur following the presidential election.

Although most will be operating on a normal schedule, the major institutions told FOX Business they will be closely monitoring the events leading up to and after the election out of an abundance of caution for employees and customers.

For many, this means keeping plywood on hand and having plans to "swiftly" close if the need arises.

As a precaution, Wells Fargo said it is boarding up the windows of a "small number of branch locations in select cities," Beth Richek, vice president of communications, told FOX Business.

The Bank of America branch, which is on Court Street, is one of the businesses that was targeted in clashes last week – it is now fully boarded up. (Credit: James Rogers)

Although certain branches will be boarded up, they will still be operating on normal hours "unless they were already temporarily closed due to COVID-19," according to the company.

"Like many companies, we are aware of concern about the possibility of post-election demonstrations this week," Richek said. "We are closely monitoring events with the safety of our employees and customers top of mind."

Likewise, Citibank locations plan to operate business as usual. However, a Citi spokesperson told FOX Business that the company will "continue to monitor for any updates" and has "plans in place" should locations need to close.

"We are closely monitoring the situation and are prepared to swiftly close branches should civil unrest or protests put our staff and customers at risk," Maggie Monaghan said.

Although Bank of America declined to comment on what safety measures it is taking, images of boarded-up windows indicate that the bank is taking similar precautions ahead of Tuesday's election.

Representatives for JPMorgan Chase did not respond to FOX Business' request for comment at the time of publication.

Leading up to Tuesday, authorities in Chicago, Miami, Portland, Washington, D.C., and other major cities have been working with local business people to address ways businesses could be impacted before, during and after the election.

Some police officials have already signaled that they will increase their staffing on Election Day as a precaution.