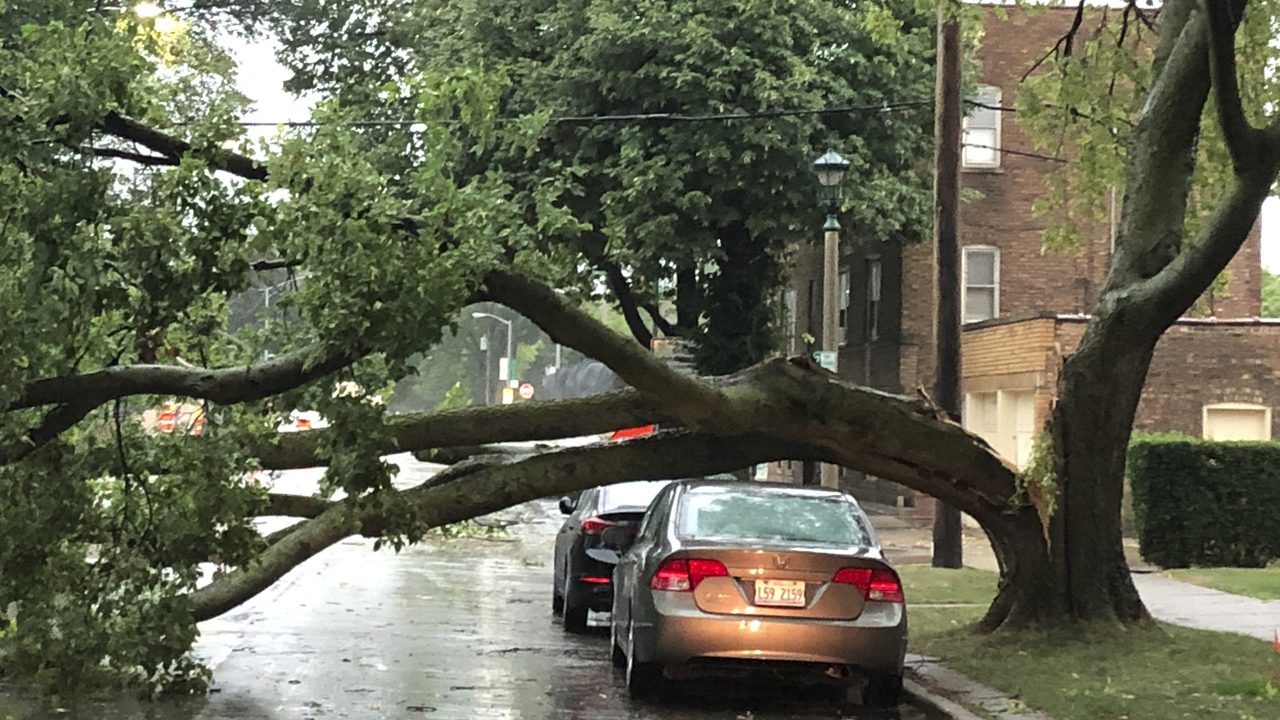 Hundreds of thousands of households in Iowa and Illinois remained without electricity Wednesday, two days after a rare wind storm that hit the Midwest devastated parts of the power grid, flattened valuable corn fields, and killed two people.

Much of Iowa and parts of several other states suffered outages Monday as straight-line winds toppled trees, snapped poles and downed power lines.

The storm known as a derecho had winds of up to 112 mph near Cedar Rapids, as powerful as a hurricane, as it tore from eastern Nebraska across Iowa and into Wisconsin, Illinois and Indiana.

DERECHO DAMAGED UP TO 10 MILLION ACRES OF IOWA FARMLAND; CORN AND SOYBEAN CROP MOST IMPACTED

The derecho produced seven tornadoes in the Chicago metropolitan area, including an EF-1 tornado with 110 mph winds that hit the Rogers Park neighborhood on the city’s north side before moving onto Lake Michigan as a waterspout, the National Weather Service said.

Part of a tree that had split at the trunk lies on a road in Oak Park, Ill., while also appearing not to have landed on a car parked on the road, after a severe storm moved through the Chicago area Monday, Aug. 10, 2020. (AP Photo/Dave Zelio)

That storm left damage along a 3-mile-long path before reaching the lake and was the first tornado of at least EF-1 strength to strike Chicago since a May 29, 1983, storm, the weather service said.

Another EF-1 tornado that swept through Wheaton, Illinois, knocked over the iconic white steeple atop College Church in the Chicago suburb that is the DuPage County seat.

The weather service also confirmed two tornadoes in southern Wisconsin and two in northern Indiana, including an EF-1 that swept the rural community of Wakarusa, about 25 miles southeast of South Bend, leaving behind smashed grain bins, damaged barns and farmhouses.

Crews throughout the region have been working around the clock to restore electricity, but they've been hindered by large trees that are blocking many roads and sitting on top of power lines. Those trees must be removed before power can be restored.

As of late Wednesday morning, ComEd reported that about 200,000 of its Chicago-area customers remained without power. Northern Indiana Public Service Co. reported about 18,500 of its Indiana customers were still in the dark.

POWER OUTAGES TOP 1 MILLION IN MIDWEST AFTER DERECHO, SOME MAY BE OUT FOR 'DAYS'

Mediacom said Wednesday that it has restored internet service to about half of the 340,000 customers that were offline a day earlier in Iowa, Illinois and Indiana. But many others may be without service until their power is restored, a process that could still take multiple days in places.

The storm caused extensive crop damage in the nation's No. 1 corn-producing state as it tore across Iowa's center from west to east.

Corn plants lie on the ground following a derecho storm that moved across the Midwest with winds recorded near 100 mph in Iowa and Illinois. (Photo by Daniel Acker/Getty Images)

In addition, tens of millions of bushels of grain that were stored at co-ops and on farms were damaged or destroyed as bins blew away.

Iowa Gov. Kim Reynolds said Tuesday that early estimates indicate that 10 million acres, or nearly a third of the state's crop land was damaged in a powerful storm that battered the region a day earlier. (Photo by Daniel Acker/Getty Images)

The only known death in Iowa was a 63-year-old bicyclist who was hit by one of several large trees that fell on a bike path outside of Cedar Rapids. In Fort Wayne, Indiana, the storm killed a 73-year-old woman who was found clutching a young boy in her storm-battered mobile home.

Many businesses, including banks, restaurants and a major corn processing plant in Cedar Rapids, remained closed Wednesday due to power outages.

The Cedar Rapids school district reported that over 20 of its buildings had roof and other structural damage, ranging from minor to significant, and that it was considering pushing back this month’s start date.

State Sen. Liz Mathis said she took cover in the basement of her suburban Cedar Rapids home Monday as the storm battered her neighborhood for 45 minutes. She said pictures fell of the wall, water seeped in through windows and she worried the glass would blow in and hurt her.

Mathis said the devastation is widespread across her district, and the “tree damage is unreal.” People are waiting an hour or longer at gas stations to fill up their vehicles and get fuel for chain saws, as some are closed or have run out of gas, she said.

Residents are clearing out their refrigerators and freezers after their food has spoiled. A local utility official told Mathis on Wednesday that it could be a week before everyone’s power is restored.

“The cities are going to look much different without the trees and it’s going to take a while to recover from this,” she said.