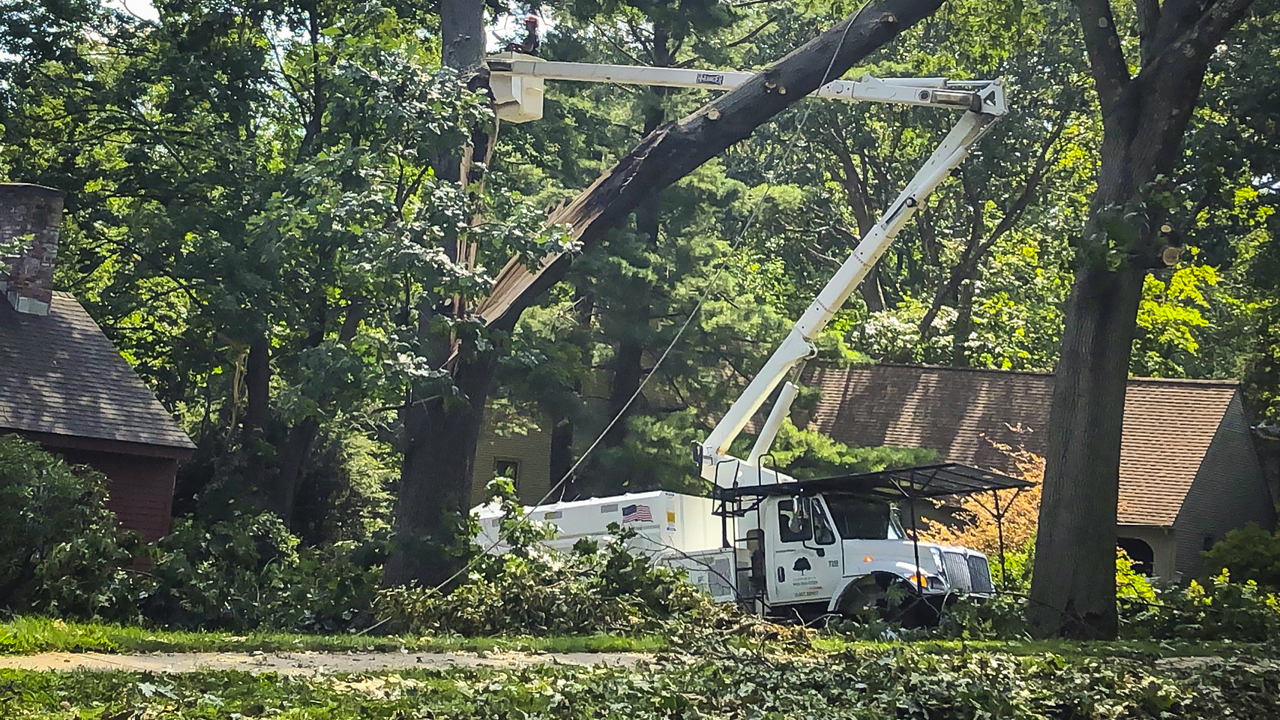 Tens of thousands of Connecticut residents remain without power nearly a week after Tropical Storm Isaias slammed the Northeast, which is now fueling a new storm of controversy involving the state's largest utility.

As of Monday morning, some 173,000 customers still remain without power in the New York City area, with Connecticut still leading the tri-state with some 91,000 still in the dark.

“Like, it just sucks having no power here, it’s like pretty frustrating, we can’t cook, the food is just all spoiled and everything," Danbury resident Kim Nunez told FOX61."It’s not fair."

According to poweroutage.us, some 88,071 Eversource customers are still without power.

Eversource, the state's largest utility, said Sunday that more than 2,300 crews are on the ground, working around-the-clock to repair "extensive damage" from the storm while also following "strict" safety protocols due to the coronavirus pandemic.

"We know how frustrated our customers who still don’t have power are, and we have thousands of utility workers repairing the extensive damage across the state today who are relentless in their determination to restore power for all customers,” Eversource President of Regional Electric Operations Craig Hallstrom said Sunday in a statement.

The power company said that over 250 miles of downed wire have needed to be repaired as part of the damage caused by the storm.

In addition, crews have had to deal with more than 1,000 broken utility poles, 400 damaged transformers, and more than 4,300 downed trees.

Utility crews from as far away as Canada, Michigan, Illinois, Ohio, and Indiana are also assisting. Eversource has said that most of its customers should see their power restored by midnight Tuesday, a week after the storm.

"I expect and demand that Eversource act with urgency over the coming day," he tweeted.

The governor has already called for Connecticut's utilities regulatory agency to investigate Eversource’s handling of the storm.

But on Saturday, other lawmakers took it a step further and called for Eversource CEO James Judge to resign over the company’s response to the damage from Isaias.

"As a business owner myself, I know accountability starts at the top, and Eversource CEO James J. Judge needs to be held accountable for his company's unacceptable preparation for, and reaction to, this storm," said Conn. State Senator Norman Needleman, the Democratic chairman of the state senate’s energy and technology committee. "He should resign as CEO of Eversource."

U.S. Sen. Richard Blumenthal has also called for Judge to resign and for Eversource not to charge customers for storm cleanup costs, the Connecticut Post reported.

"Eversource’s CEO, Jim Judge, was paid $19.8 million last year, but can’t be bothered to face the public, return phone calls, restore power, or say when. He should go," the Democrat said on Facebook. "Anger & frustration are boiling over—mine included. This injury added to the insult of higher rates seems like the last straw."

A company spokesperson responded on Sunday in response to comments by lawmakers in a statement to FOX61, saying: "As with all storms, we will participate in an after-action review with regulators and community stakeholders to evaluate our approach to emergency response efforts and storm restoration. But today we’re focused on one thing – doing everything we can do to restore power to our customers."

Officials and town leaders, however, said they will be looking to hold the utility accountable.

“We have to do better, we have an obligation to hold them accountable and find ways legally to make them more accountable to the ratepayers,” Needleman said.

Hurricane Isaias made landfall near Ocean Isle Beach, N.C., last Monday with 85 mph winds, before rocketing northward as it was downgraded to a tropical storm.

The storm's wicked winds that triggered tornadoes, downed trees, and floodwaters left 9 dead, including a 5-year-old girl in Pennsylvania. Millions were left without power, with Connecticut and New York facing the greatest number of outages.