Tourists are getting closer to traveling to the final frontier.

Virgin Galactic on Thursday revealed its futuristic travel lounge in the New Mexico desert. The lounge, dubbed “Gateway to space,” is located on Virgin’s Spaceport America campus, which houses its spacecraft and training facilities, and will be the “nerve center” for flight operations.

The lounge, which will allow future astronauts to “share breakfast with spaceship pilots, grab coffee with rocket engineers and pass the time of day with the team from Mission Control,” features a central bar made of back-lit Italian marble.

So far 600 people have reserved trips, which cost about $250,000 per ticket for a 2.5-hour ride. Virgin Galactic plans on sending its first customers to space in early 2020. Billionaire Sir Richard Branson, who founded the company in 2014, is planning on being the first tourist to fly into space. 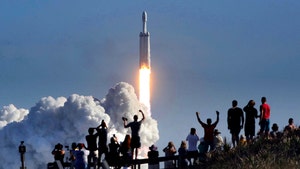 During a campaign rally in New Hampshire, the president noted a few billionaire investors are paying rent to the government with their space ventures

And while Branson may be leading the space race, he isn't the only billionaire in the game. Amazon CEO Jeff Bezos, Tesla CEO Elon Musk, Budget Suites of America owner Robert Bigelow, and Google co-founder Larry Page all have their own plans.