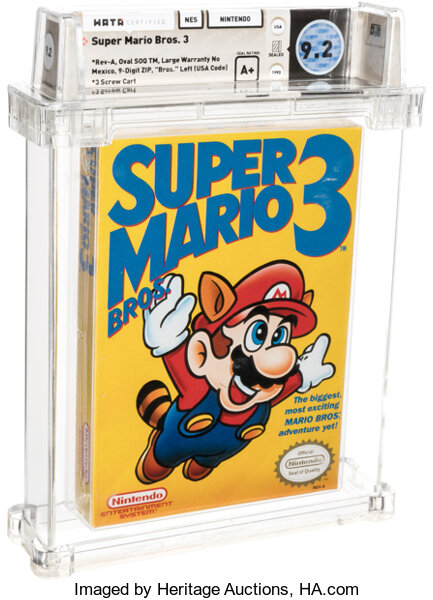 There's only one word for this: Wa-hoo.

A sealed copy of Nintendo's "Super Mario Bros. 3" has become the most expensive video game ever sold, going for a whopping $156,000 at auction on Friday.

The sale, handled by Dallas-based Heritage Auctions, broke the previous record of the original "Super Mario Bros.," which sold for $114,000 earlier this year.

"We couldn't be more pleased about breaking the world record for the second time in the same year," said Valarie McLeckie, Heritage Auctions' Director of Video Games, in a statement. "That said, it's no surprise that another Mario game, which so many of us grew up with, would set the new bar."

The copy of the famous Nintendo game, which has a grade of Wata 9.2 A+, saw an initial bid of $62,000, but 20 different bidders started raising the price on the one-of-a-kind game.

"While the condition of the game is remarkable, what makes this copy even more singular is the layout of the packaging itself: Exceedingly rare are sealed copies with the word 'Bros.' formatted to the left, covering one of Mario's signature white gloves," the statement added. "Collectors have spent years looking for such a version — the earliest in the Super Mario Bros. 3 production history – and usually come up empty-handed."