U.S. Energy Secretary Rick Perry on Tuesday said the time has come for America to boost its dominance in artificial intelligence.

“We found a couple of years ago that we were in about third place on the supercomputers and the administration made the commitment that that's not good enough. Whoever gets the quantum computing first wins,” Secretary Perry told Maria Bartiromo on “Mornings with Maria.” “And so this administration now has increased funding by 45 percent on our supercomputers.”

“I was out at the University of California San Francisco again. Where [former Citigroup CEO Sandy Weill] has been a great and extraordinary benefactor from the standpoint of those universities neuroscience school,” he said. “And it started making some sense that we would be able to have a public-private partnership with the Weill Family Foundation.” 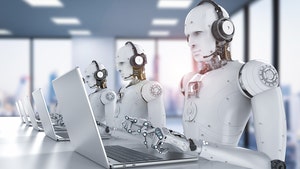 HOW ARTIFICIAL INTELLIGENCE IS SHAPING THE FUTURE OF SOCIETY

Sandy Weill, the former CEO and chairman of Citigroup who was also part of the interview said the supercomputers, will have the ability to give doctors access to information much faster.

“What we're trying to do and I think what we will do working with the Department of Energy is to be able to look at a thousand times more information in a very short period of time so that the information is really important to the doctors, they're seeing it in real-time rather than weeks later when it where it's not nearly as valuable,” he said.

CLICK HERE TO WATCH THE ENTIRE INTERVIEW WITH PERRY AND WEILL

However, the partnership is already finding “great answers to questions” on mental health, traumatic brain injury, concussions and CTE that the U.S. didn’t have the capacity to answer, Perry said.

“We're seeing some great work being done on traumatic brain injury, again because of what Sandy and his foundation is doing out at UCSF at California with Dr. Jeffrey Manley,” PErry said referring to the University of California, San Francisco.  “He's come up with device, Maria, take a drop of your blood and even if the MRI doesn’t show a concussion he can tell definitively of course they're not you've been concussed -- that's life-changing stuff.”

And it's not just health care that quantum computing will be vital to. Perry and Weill believe it can be important to "all different areas."