In a crowded bar, patrons sometimes have to be pushy in order to get their drink from the bartender. And no one likes that guy or gal who jumps in front of you at the last second, right before the barkeep points to you.

A.I. Bar, powered by British A.I. firm DataSparQ, has taken that frustrating process away with new software. The technology uses facial recognition to place people in a digital queue that is much fairer. 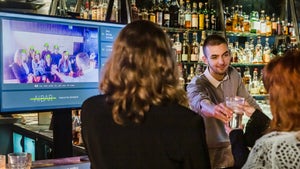 Bartender hands a drink to a patron after using A.I. Bar software to determine who was next in the queue (DataSparQ)

“Queuing is a part of British life that we all have to endure – but we wanted to do something to improve the experience," John Wyllie, DataSparQ managing director, said.

A survey commissioned by DataSparQ asked 2,000 drinkers what their biggest complaint is at bars. Eighty percent of those surveyed said it's people pushing in at bar queues. 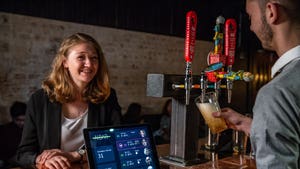 Bartender serves a patron after using A.I. Bar software to determine who was next in the queue (DataSparQ)

“I always hate it when I’m in at the bar and groups of rowdy guys push in front of me," Katherine Rees, a survey respondent, said. I shouldn’t have to get into a confrontation with strangers just to order a drink. With this new technology that’s something I never have to worry about again, my only problem now is choosing what to drink!”

DataSparQ research found Brits spend more than two months of their lives waiting for service at a bar. 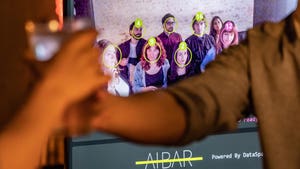 Bartender hands a drink to a patron after using A.I. Bar software to determine who was next in the queue (DataSparQ)

The software reportedly reduced serving times, which could be good as a study showed 75 percent of Brits have walked out of a bar because the wait to get a drink was too long.

When asked if they would stay in a bar if they knew exactly how long the wait time was, 66 percent of those surveyed said they would.

Another helpful tool of the software is age recognition. If a patron looks younger than 25, the system prompts them to have their ID ready and will let the bartender know it's already been checked. 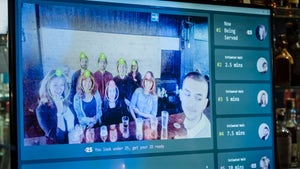 A.I. Bar software determines who is next in the queue by using facial recognition software (DataSparQ)

A possibly unexpected benefit of A.I. Bar is lessening the intimidation of ordering drinks when you're by yourself. Of those surveyed, a majority said they have felt intimidated while ordering alone at a bar.

Another function still in development is the ability to reorder a drink while still in line. The tech remembers the patron's previous order and will respond to a simple hand signal if they would like to make a change. 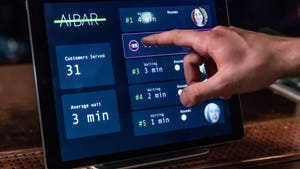 Bartender uses A.I. Bar software to determine who is next in the queue (DataSparQ)

What about the idea someone might buy a drink and put it on your tab? According to DataSparQ, a feature called "FaceTab" connects a bar tab to a person's face using facial recognition.

“We are in talks with drinks companies and pub chain owners to roll out the technology nationwide in the next 12 months," Wyllie said. "The system can be installed anywhere and is scalable – so we are expecting it to start in bars and progress into music festivals and beyond.”

The A.I. Bar software-as-a-service would cost bar owners about $240 a month and connects easily to a webcam, a display screen and an internet connection.