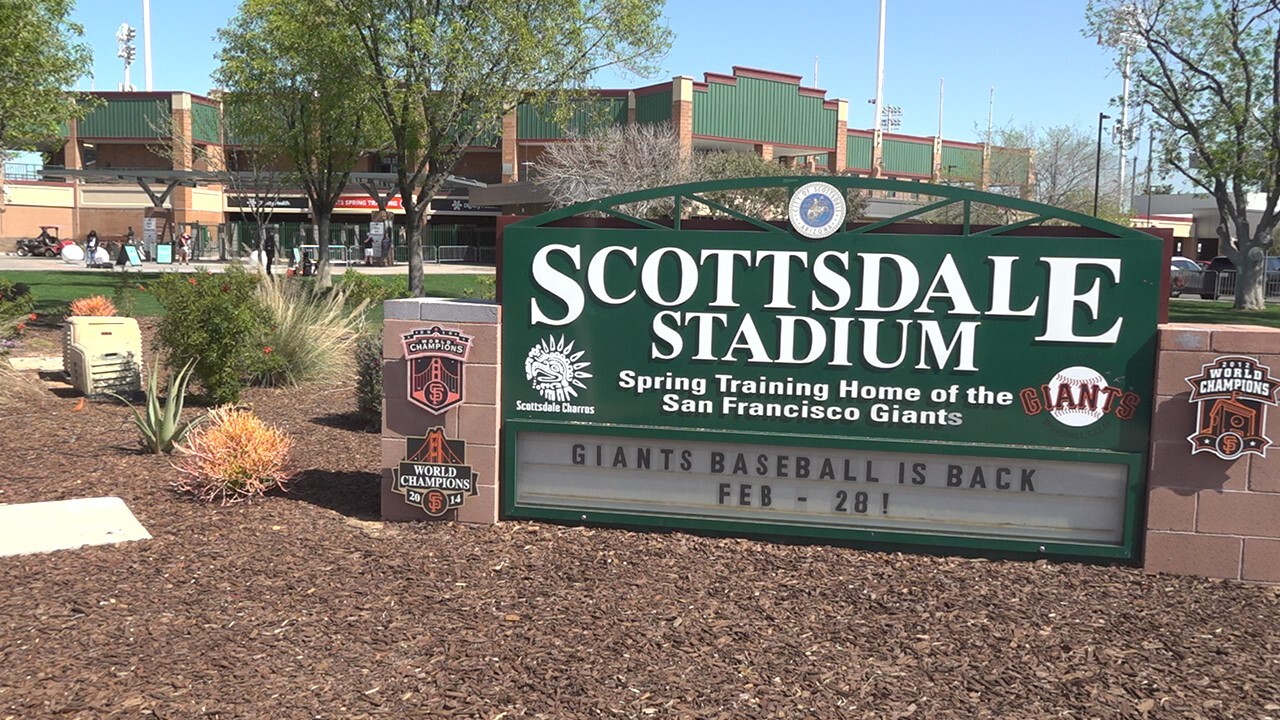 Spring training for Major League Baseball is back after being cut short last year and because of the COVID-19 pandemic and while the players and fans are happy for the return so are thousands of local businesses.

Every year, spring training divides the 30 MLB teams in half, with 15 heading to Florida as part of the Grapefruit League, while 15 others travel to stadiums across central Arizona to play in the Cactus League. It's an economic boon for both states.

According to the Arizona Office of Tourism, before the pandemic, the Cactus League would see almost 2 million fans spending on average $644 million dollars and creating more than 6,000 jobs every spring. In Florida, the numbers are similar according to the Flordia Sports Foundation with spring training have a $687 million dollar impact.

Scottsdale Mayor David Ortega says the presence of the San Francisco Giants in his city generates about $2 million per game played at Scottsdale Stadium. It is an economic benefit the city has seen for decades.

Several fans Fox News spoke with in Scottsdale to are happy to be at the ballpark.

“I've been a fan all my life,” Darrell Beck, said at Scottsdale Stadium, “I can't wait to look at the ball field. I feel like a kid again, at 72, I feel like a child and I love baseball with all my heart.”

Beck and his wife, Joyce, have spent the last eight years cheering on their beloved San Francisco Giants in the Cactus League. Every spring they take the sojourn from their home in California to sunny Scottsdale, Arizona.

“We had to wait to get our second COVID shot before we were able to come, we were supposed to be here two weeks ago,” said Joyce Beck. “It was exciting to be able to get away, and see what they've done to the stadium, they've changed some things so that's nice.”

Tickets are being sold at a limited capacity with strict social distancing guidelines in place. Everyone is also required to wear a mask.

“I'm thankful that MLB is allowing fans back and very thankful to be here,” said Chicago Cubs fan Tyler Waldaias, visiting from Reno, Nevada. He says being able to attend spring training this year gives him a sense of normalcy again.

Tickets are being sold at limited capacity with strict social distancing guidelines in place. Everyone is also required to wear a mask (Stephanie Bennett/Fox News).

“Apart from the masks, it’s just like a fresh slate. Spring training is awesome, it’s the beginning of every year so it's exciting to see the work that's been put in behind closed doors, the guys and gals behind the scenes, and seeing the progression that's made, but ultimately it's a fresh slate we forget about last year and the troubles that we had and look at the new beginnings per se, so it's rejuvenating,” said Waldaias.

When spring training was shut down last year -- which ultimately delayed the start of the MLB season until July -- ticket, hotel and restaurant sales struck out resulting in millions of dollars of lost revenue. The state's tourism office estimates the loss of the shortened season was around $281 million.

Spring Training wraps up at the end of the month with baseballs opening day on April 1st (Fox News).

Mayor Ortega remembers the sudden change MLB's decision had on his city.

“You felt the bustle and everything, but then, literally a week later, people were booked and flying out of town," said Ortega. "It’s part of our lifeblood in Scottsdale."

One year later, things are coming back. Down the road from the ballpark, the Goldwater Brewing Company had to close for six months during the pandemic, but now sales are pouring in again.

“Six years ago when we were looking for a location we found Old Town Scottsdale as being a very tourist area. So obviously spring training is one of the biggest tourist motives for people to come into town. So, without tourism, it kind of directly affected our taproom and brewery here in Old Town Scottsdale,” said Dillon McClelland, Co-owner and Creative Director for Goldwater Brewing Company.

Goldwater Brewing Company had to close for six months during the pandemic, but now sales are pouring in again. They’ve expanded their seating outside to meet social distancing guidelines and they’re offering more beer-to-go options to keep up with de

“So with people coming back, it's been nice to see some out-of-towners, some annual regulars as we call them that come back every year and we're happy to see them.”

McClelland says they’ve expanded their seating outside to meet social distancing guidelines and they’re offering more beer-to-go options to keep up with demand.

“We survived it and we're thriving still so it's been nice,” said McClelland.

Spring training wraps up at the end of the month with baseball's opening day on April 1st.