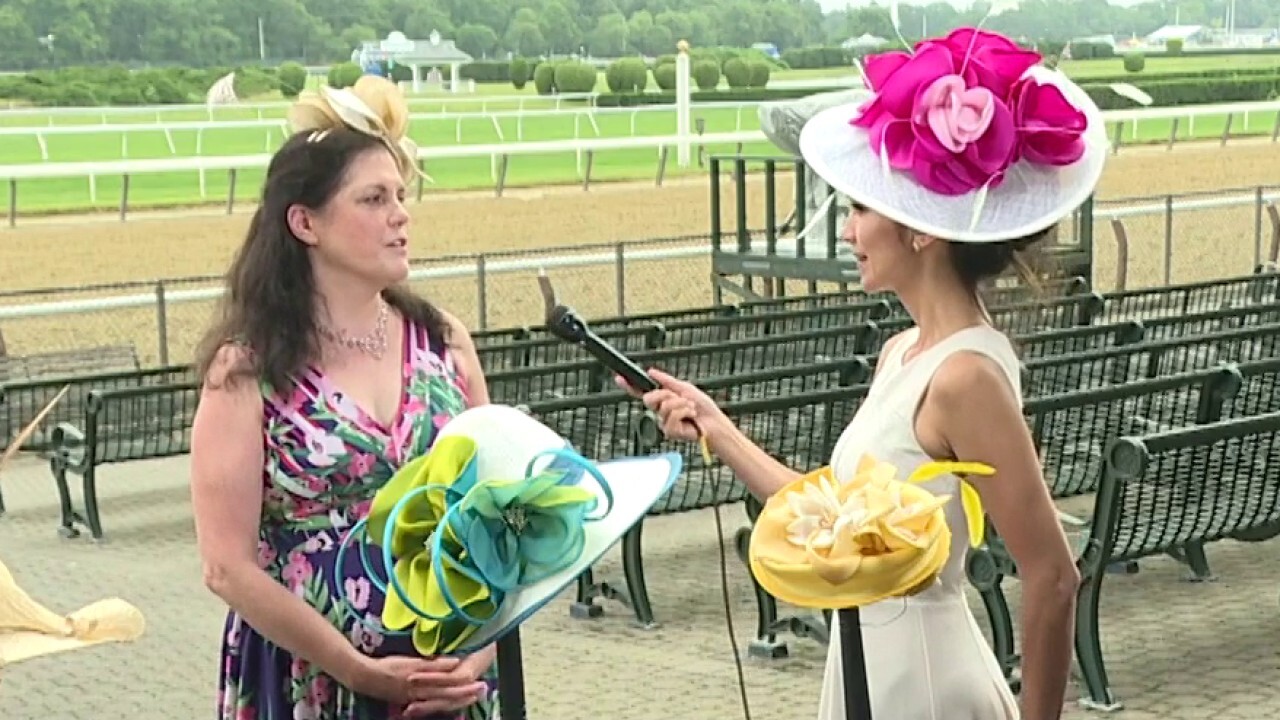 FOX Business' Lydia Hu reports from the Belmont Stakes in Elmont, N.Y., on how small business that rely on the horseracing industry are preparing for the return of spectators.

The Belmont Stakes, one of the country’s oldest horse racing events, usually draws a crowd in excess of 100,000, has an economic impact on Long Island of more than $10 million and is the last jewel in the quest for thoroughbred racing’s Triple Crown. The 2021 edition will have none of those on Saturday.

The 153rd running of The Belmont Stakes at Belmont Park will allow spectators – but only 11,000 --  after last year’s race won by Tiz the Law prohibited fans due to the pandemic. While the event still generated bets of more than $67 million, it was a far cry from 2019’s $102 million.

Still, the return of the race and any fans is welcome news to both business owners near Belmont Park and the businesses that directly tie-in to the horse racing industry after a tough 2021.

"Belmont is Long Island's race. It is so great to have people back at the racetrack," said Christine A. Moore, the four time featured milliner of the Kentucky Derby –  including this year's edition – and owner of a popular New York City millinery in her namesake.

The $102 million wagered two years ago was a record for a non-Triple Crown year too. With no crown at stake, that may damper betting as well. Kentucky Derby winner Medina Spirit and trainer Bob Baffert were banned from racing in New York last month effectively eliminating any chance for a Triple Crown. The controversy was rendered moot, however, when Medina Spirit finished in The Preakness, the second leg of the Triple Crown, in third place.

Despite lacking a Triple Crown hopeful, Moore has been preparing for the the big race and beyond.

"I knew [business] was going to get better [in the middle of the pandemic] so we built up inventory to the point where we had too much…now we have a shortage," said Moore.

The impact of horse racing on state economies can indeed be massive.

According to Patrick McKenna, Senior Director of Communications for The New York Racing Association (NYRA), horse racing in New York State alone is responsible for "19,000 jobs and more than $3 billion in annual statewide economic impact."

HORSE RACING ON THE DECLINE? NOT IN THIS STATE

And at the forefront of this robust yet niche industry are Belmont Park and the Belmont Stakes which McKenna says "are two of the cornerstones of an industry that creates jobs and opportunity in every corner of the state, particularly in the tourism and hospitality sectors."

While many are gearing up for this weekend’s race – with Kentucky Derby favorite and eventual 4th place finisher Essential Quality set as the 2-1 favorite – one of horse racing’s biggest names will not be participating.

Bob Baffert – the legendary but controversial trainer of Kentucky Derby winner Medina Spirit – was temporarily suspended from the NYRA on May 17th in the midst of Medina Spirit’s failed post-race drug test.

The NYRA reasserted that suspension Thursday in a statement to FOX Business: "On May 17, the New York Racing Association, Inc. (NYRA) announced the temporary suspension of Bob Baffert from entering horses in races and occupying stall space at Belmont Park, Saratoga Race Course and Aqueduct Racetrack. That suspension remains in effect and NYRA will make a determination regarding the length and terms of Mr. Baffert’s suspension at the appropriate time and based on information generated by the ongoing investigation in Kentucky."

It has been a tumultuous week for Baffert, who is set to miss out on an event he has won three times, including with Triple Crown winners American Pharaoh (2015) and Justify (2018).

On Wednesday, Baffert was saddled with the news that Medina Spirit had failed a second post-Derby drug test, confirming the original positive result and putting the wheels in motion to be the second horse disqualified in Kentucky Derby history due to a failed drug test.

Furthermore, in the wake of the second positive test, Churchill Downs announced their suspension of Baffert and any trainer employed by his racing stables company for two years – through the 2023 season.

That’s not the only problem for Baffert – who said on Fox News Channel’s "America’s Newsroom" that the decision was "[like] cancel culture" – as he now faces a class-action lawsuit from angered fans and bettors of horses such as Mandaloun, which came in second at the Derby.

"We’re getting literally hundreds of contacts from people who placed wages – people who are outraged – [asking] am I going to be treated fairly? Is the next race going to be an honest competition between horses?" said Bill Federman, an Oklahoma City lawyer who filed the lawsuit on behalf of the plaintiffs.

"I don’t think Churchill Downs took it as serious as they should have in the beginning, and now pretty much our lawsuit is being confirmed by the second test. Without a doubt, the horse was doped. It had illegal substances used on it, it enhanced its performance and now it’s up to the horse racing industry [to take care of it]," the Oklahoma attorney commented.

"What we have found [is that] people like Bob Baffert are similar to CEO’s of public companies. The only way you get their attention is through their pocketbook. He needs to make amends. Saying he is sorry or is he going to look into it is like O.J. Simpson still running around golf courses ‘trying to find the murderer,’" Federman analogized.

And what about Baffert’s claim that this is an example of "cancel culture"?

"Well to the extent that we are trying to cancel Bob Baffert from the industry? Perhaps. But looking at it in hindsight, no. Come on. The horse was doped. How much is he earning off these horses and why does he not know what happened? It just doesn’t get through the smell test," the lawyer remarked.