Gen Xers accounted for 24 percent of homebuyers in 2018 and were the group that accounted for the greatest share of multi-generational home purchases, according to the National Association of Realtors.

With the generation spanning ages 39 to 53, Gen Xers could be using those multi-generation homes for family members like aging parents or their own children returning after college. And one thing that can really make life more comfortable for family members squeezing in together is a second master suite.

The first master bedroom of this California home inspired by a Spanish palace has three sides of floor-to-ceiling glass. (Credit: The Agency)

Multi-generational housing has become more popular, the National Association of Realtors said in a 2014 report. It found that home builders got increased value by including separate living spaces and dual master suites or in-law suites.

This master suite in a luxurious Mexican villa includes an exterior shower and patio. (Credit: RLH and Hayes Davidson)

Some buyers may think a second master suite is strange at first, but Gambrick said an additional large bedroom with a connected bath and closet doesn’t hurt resale value. Listings for dual master bedroom homes are listed on average for 9 percent more than others at the top of the national real estate market, according to the builders. 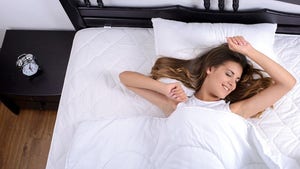 'Sleep divorce' couples demand more from a home than man caves, she sheds

More couple are choosing to sleep apart. We asked real estate experts how common this phenomenon really is.

In some cases, couples are just splitting the two masters between themselves, Architectural Digest reported. Los Angeles interior designer Lori Halprin told the publication in 2017 that she’d recently worked on a home with two masters.

This master suite in a Santa Barbara home has its own wing. (Credit: The Agency)

“The gentleman incorporated his bedroom with his home office,” Halprin told Architectural Digest. “The woman was a clotheshorse and wanted the extra sitting area made into a closet.”