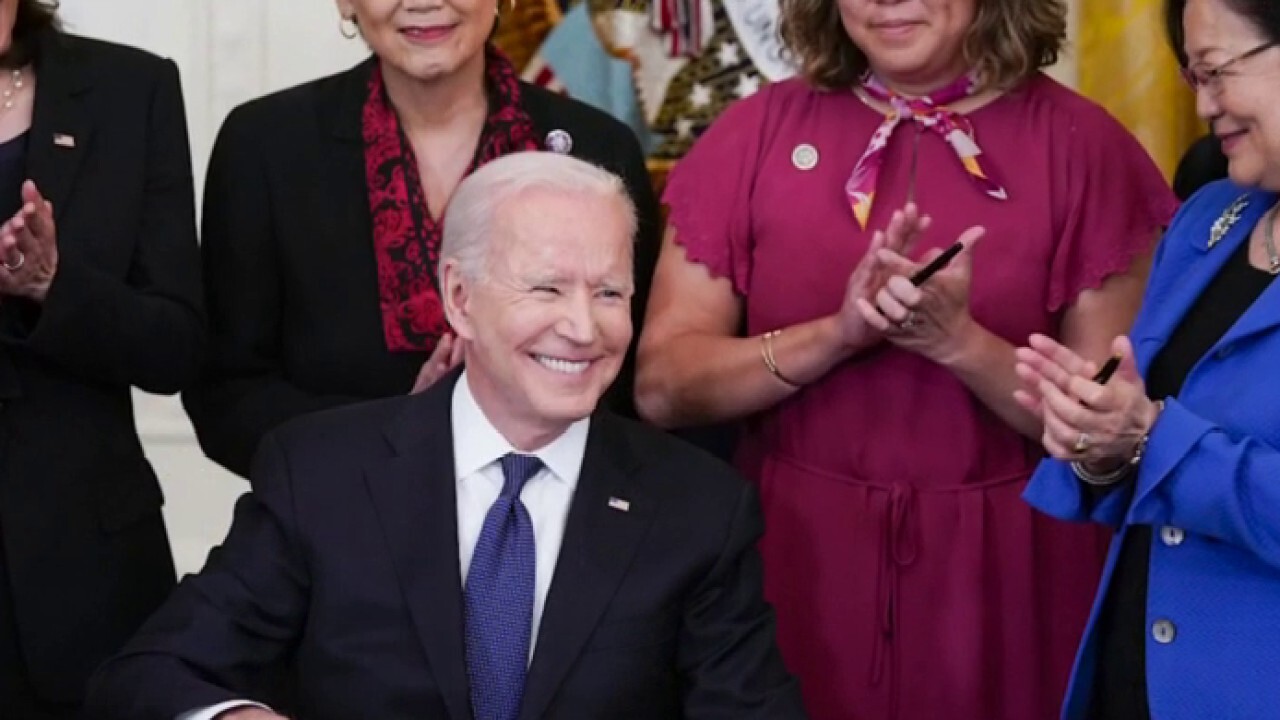 Members of the Republican Study Committee on Tuesday condemned Democrats' $3.5 trillion budget resolution, saying it will only add to record inflation.

The House voted 220-212 along party lines on Tuesday to advance Biden's $3.5 trillion budget blueprint that progressives want, while locking in assurances for moderates that the Senate-passed $1 trillion bipartisan infrastructure bill will get a vote by Sept. 27.

"While our country grapples with the…disaster unfolding in Afghanistan, the border crisis, surging crime, historic inflation and countless other disasters that this administration and the left have created, [Vermont Independent Sen. Bernie Sander's] budget only ups the ante," Republican Florida Rep. Kat Cammack said during a press briefing.

Cammack criticized the budget resolution, which Republicans have dubbed the "Bernie Budget," as a "tax-and-spend, liberal-wish-list-free-for-all that" would lead to $68 trillion in spending "over the next 10 years."

"Combined spending from this resolution and all spending from the House Democrats' majority since 2019 holds more than the total taxes paid by all Americans in U.S. history," the Republican congresswoman said, adding that increasing debt will add "fuel" to inflation that reached a 13-year high in May and continues to climb.

The U.S. Labor Department reported last week that prices for food and energy further increased in July. The Department's consumer price index (CPI) rose 5.4% year-over-year in July, matching the prior month's gain as the fastest since August 2008.

Rep. Jim Banks, R-Ind., and others also condemned the resolution, as well as the Biden administration's $1 trillion infrastructure bill, as a threat to the country and its national debt.

"This budget will add an obscene $17 trillion more to our national debt," Banks said during the conference. "If you think our inflation is bad right now, can you imagine what it will be like when Democrats pass this budget, which would borrow another $17 trillion over the next decade?"

The Democrat-backed measure would include nearly all key elements of the president’s American Families Plan, including the creation of a national comprehensive paid family and medical leave program, funding for free universal preschool for 3- and 4-year-olds, and free community college for all students.

Additionally, it expands the number and amounts of Pell grants, extends the child tax credits that were included in the COVID relief package, and funds numerous clean energy programs. The measure also provides funds to expand Medicare coverage for hearing, vision and dental and to combat climate change.

To pay for their plan, Democrats are calling for tax hikes on corporations and the wealthiest earners, as well as beefing up the IRS in order to generate more revenue by cracking down on people who cheat or underpay on their taxes. If it becomes law, the measure would become the biggest expansion of the federal government’s social safety net in many decades.

As part of the compromise with the moderates reached Tuesday, Democratic leadership strengthened language that will assure the House considers the Senate-passed $1 trillion infrastructure bill by Sept. 27. Pelosi had been insisting the bipartisan bill be linked to the passage of the $3.5 trillion budget to fully encapsulate Biden's spending agenda.

Pelosi has praised the spending package, saying it will "will make bold, essential investments in our values as a nation."

Progressive champion Sen. Bernie Sanders, I-Vt., who successfully steered the spending blueprint through the Senate, which resulted in a 50-49 party-line vote earlier this month, touted that if the measure becomes law, it will "restore the faith of the American people in the belief that we can have a government that works for all of us, and not just the few."