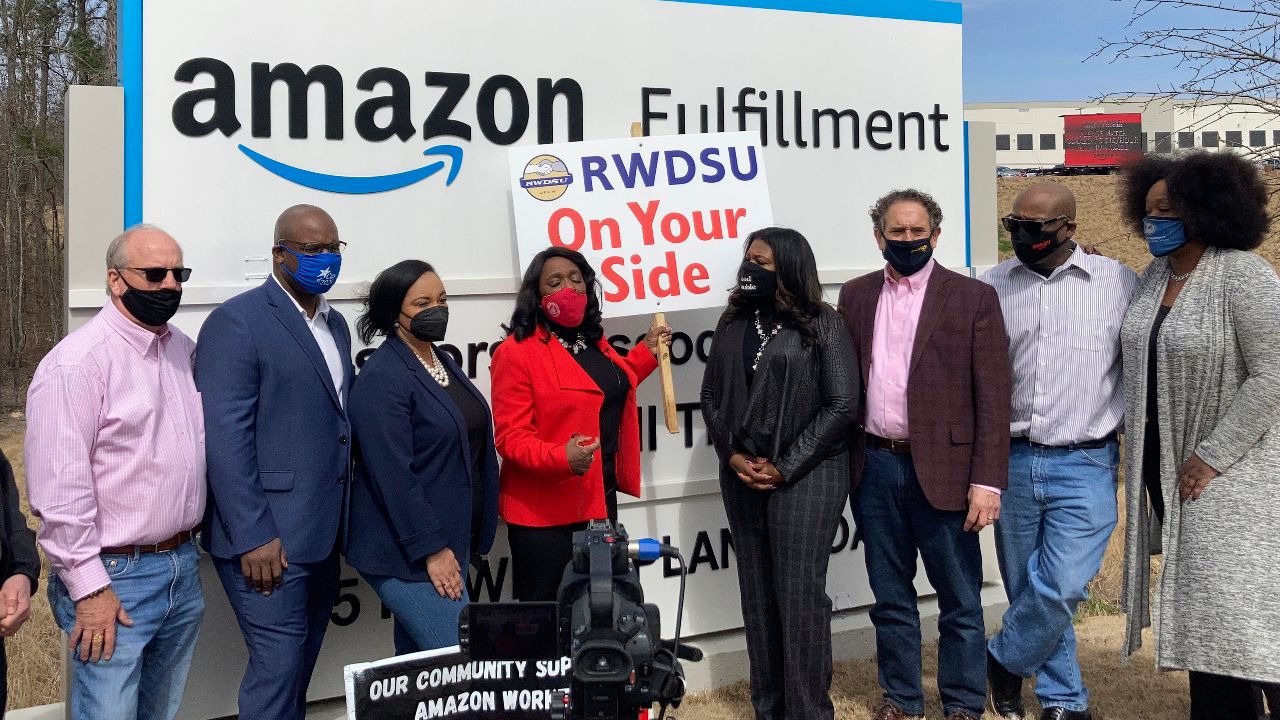 The South has never been hospitable to organized labor. But that may be changing, with an important test in Alabama, where thousands of workers at an Amazon campus are deciding whether to form a union.

Labor organizers and advocates see the David-and-Goliath fight as a potential turning point in the region with a long history of undervalued labor and entrenched hostility to collective bargaining rights. A win could have economic and political ripples for the labor movement and its Democratic Party allies who want a stronger foothold in the South amid decades of dwindling union power nationally.

The mere presence of a national union figure like Appelbaum in Alabama underscores the stakes.

The Amazon vote comes as Democrats and Republicans are battling fiercely for working-class voters. Over decades, many white workers have drifted toward Republicans, attracted in part by cultural identity and an anti-establishment posture. That's left Democrats looking to refine their economic pitch, arguing their party is the one fighting for higher wages, better working conditions and more affordable health care.

A win in Bessemer, where the vast majority of the workforce is Black, would have additional significance as a launchpad for new political organizing in the South, where Democrats want to build on recent successes.

That could prove decisive in newfound battlegrounds like Georgia, which Biden pulled into the party's presidential column for the first time since 1992 and where Democrats won two Senate races. It could be a building block in GOP-dominated states like Alabama and Mississippi. And any domino effect nationally could boost Democrats in old industrial Rust Belt states like Pennsylvania and Ohio, where Republicans have gained ground.

Rep. Terri Sewell, D-Ala, in the center wearing red, and Rep. Nikema Williams, D-Ga., at the far right, join fellow members of Congress, labor organizers and employees at an Amazon facility in Bessemer, Ala., on March 5, 2021. (AP Photo/Bill Barrow)

Biden drew plaudits from labor leaders with a recent video address pushing the right to organize through “free and fair elections," although he did not directly mention the Amazon campaign.

The ongoing mail vote by almost 6,000 workers is the largest union push ever at Amazon, one of the world’s wealthiest companies. The election, which runs through March, also ranks among the largest single organizing efforts in Southern history. It follows a series of failed organizing votes at automobile assembly plants -- Nissan in Mississippi in 2017, Volkswagen in Tennessee in 2019, among others -- that have flocked to the region over the last three decades.

“Wages in this region have been depressed from the time of slavery,” said historian Keri Leigh Merritt, because “we’ve always had these competing underclasses of different races that white elites,” from the South and elsewhere, “have been able to play off each other.”

The result, Merritt said, is nearly all laborers being paid “below the national market.”

The 2019 median household income in the U.S. was of $62,843, according to Census Bureau data. In Bessemer, part of an industrialized swath outside of Birmingham that once teemed with steel mills, that figure was $32,301.

“We just want what’s owed to us,” said Kevin Jackson, a worker at the distribution center.

Almost 6,000 workers are currently voting by mail on whether to form a union that would give them collective bargaining rights with Amazon. (AP Photo/Bill Barrow)

Jackson, who is Black, compared Amazon wages, which start at $15 an hour, about double minimum wage, to the fortune of company founder and CEO Jeff Bezos, whose net worth measures in the hundreds of billions.

“When you kick a dog so many times, he’s going to bite,” Jackson said. “We’re biting back.”

The union's election overlaps with Biden and Democrats in Congress pushing the “PRO Act,” legislation that would overhaul labor law to make organizing easier. The bill represents the most significant labor law change since the New Deal era and follows a decades-long slide in union membership. In 1970, almost a third of the U.S. workforce were unionized. In 2020, that number was 10.8%.

The House approved the overhaul Tuesday on a largely party line vote, but it faces almost certain defeat in the 50-50 Senate where major bills require at least 10 Republican votes to avoid a filibuster.

Even without that law, labor leaders say the Amazon result could be a springboard for labor organizing nationwide. Regionally, a win would provide a roadmap for a Southern workforce unaccustomed to unions as a routine part of the economy.

Mary Kay Henry, president of the Service Employees International Union, said the Alabama workers are “inspiring,” and added that her union and others are watching closely as they mull expansion.

Democratic members of Congress join representatives of the Retail, Wholesale and Department Store Union gather outside an Amazon fulfillment center in Bessemer, Ala., on March 5, 2021. (AP Photo/Bill Barrow)

Organized labor’s Southern deficit is glaring: all 11 states of the old Confederacy have so-called “right to work” laws, which allow workers in unionized shops to opt out of paying union dues even as they retain the benefits and job protection negotiated by the union. That weakens unions by reducing their membership and their negotiating leverage. Most Southern states also bar public employees from collective bargaining.

The entire region lags national union membership when measured as a percentage of the workforce. For example, the United Auto Workers has more than 400,000 members, but just 12,000 in Southern states, despite the region’s abundance of internationally owned auto plants and associated suppliers.

Merritt, an expert on Southern labor politics, drew a straight line from the pre-Civil War economy to the current climate.

Before slavery’s abolition, she said, white workers were threatened -- explicitly or implicitly -- with being replaced by slaves, stripping them of any leverage with employers. After emancipation, free Black laborers and poor white laborers had to compete in a devastated agricultural economy that struggled to rebuild itself from the war. Eventually, northern industrialists entered Southern markets, joining white Southern land barons to take advantage of cheap labor in industries including textiles, steel and mining.

The trend continued as the regional economy expanded with chemical plants and oil refineries in Texas and Louisiana, shipbuilding along the coasts and, eventually, auto plants from Texas to the Carolinas.

Generations of Southern elected officials -- Democrats and Republicans — perfected their pitch to outside firms.

“They always offered major tax breaks and basically sold people on moving their factories South by saying, look, we can offer you rock-bottom labor prices and labor laws that will always favor employers,” said Merritt.

Amazon has held mandatory sessions to tell workers a union would command dues when they already get the kind of compensation benefits, including health insurance, that unions negotiate. (AP Photo/Michel Spingler, File)

Some observers say that history should temper expectations.

“The political power of business and corporate leaders and the anti-union power in the South are still quite strong,” said Duke University emeritus professor Robert Korstad, an expert on Southern labor’s evolution. “So, it’s not going to be anything easy.”

Amazon, which has a long record of beating back organizing campaigns, has held mandatory sessions to tell workers a union would command dues when they already get the kind of compensation benefits, including health insurance, that unions negotiate.

“We believe we already offer everything the unions are requesting and that we highly value direct communication with our employees,” said company spokeswoman Heather Knox.

All House members there already had supported a $15 wage bill.

The union organizers have a sign of their own in Bessemer — one that hints at the broader political possibilities beyond the campaign. Outside the Amazon warehouse is a banner depicting voting rights advocate Stacey Abrams — credited as an early architect of Biden’s win in Georgia — as a “Rosie the Riveter” character, an iconic symbol of workers’ power.