In a political environment where the word "socialism" is thrown around often, two economists decided to see the real-world examples by using one common denominator: Beer.

Robert Lawson and Benjamin Powell co-authored the book "Socialism Sucks: Two Economists Drink Their Way Through the Unfree World," which follows their travels to socialist or formerly socialist countries to find out what beer is like there under the system.

Lawson told "Fox & Friends" about his time in Cuba.

"One of the things you learn about places like Cuba is that the central planners in Havana make all the decisions for the economy, so guess what? They give you two kinds of beer," Lawson said. "And they don't let you import beer either, so whether you like it or not, you get two kinds, comrade."

He said things are even worse in Venezuela, to the point that they have run out of beer.

"The entire country's run out of beer because the stupid government didn't give the company enough hard currency to import the barley," Lawson said. "So one of the things you see in socialist countries is a complete lack of variety and you're just stuck with whatever they happen to give you."

Powell and Lawson wanted to go to North Korea to find out what their beer was like, but they joked their wives said they weren't allowed to get arrested or killed during the research of the book, so they decided to take a different approach.

"What we did was we played around in South Korea and then we went up to the Yalu River -- that's the border between China and North Korea -- and went up and down there a bit," Powell told FOX Business' Stuart Varney on "Varney & Co." "The beer, when you can get it, is God awful. Think of the worst malt beer you've ever had and make it worse." 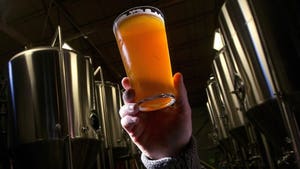 Powell found drinking beers in different countries to be a metaphor for how the economies actually function.

"If you go to a place like Sweden that Bernie [Sanders] says is socialist, it's not. It's got great private property," Powell said. "It does have big taxes and is a big welfare state, and that's a problem. It makes their beer really expensive, but you've got a wonderful variety there because capitalism provides."

Lawson insisted it's a myth Sweden is a socialist country.

They both said even countries that are no longer socialist are still feeling the effects.

"[Russia is] kind of not socialist anymore ... things are better," Lawson said. "Certainly the alcohol is better. But it's still suffering from the state control of the economy they had in Soviet times."

Lawson and Powell said they wrote the book to hopefully reach an audience that usually wouldn't read their academic articles on the subject.