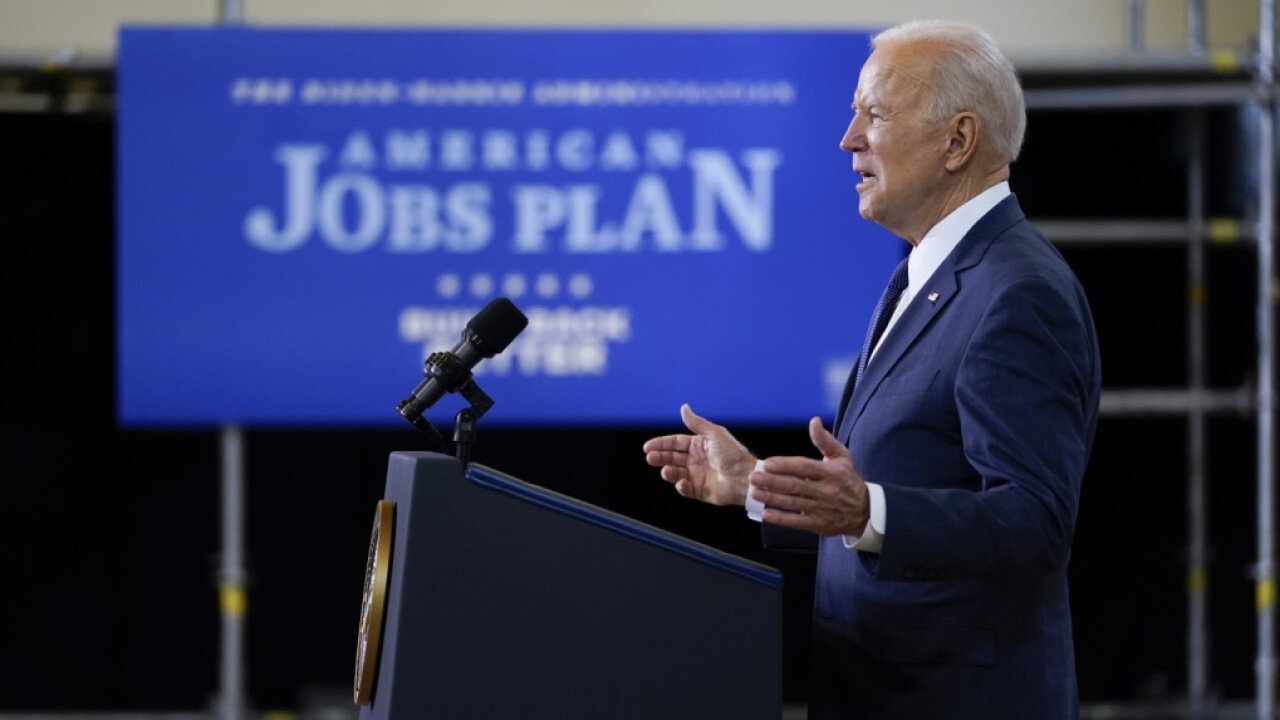 Infrastructure can be passed 'very quickly' if you get rid of tax increases: Rep. Smith

A bipartisan spending proposal put forward by a group of senators Thursday is already drawing criticism from some progressive Democrats, who are amping up pressure on the Biden administration to go it alone on a sweeping, multitrillion-dollar spending package.

A coalition of 10 senators reached an agreement for $579 billion in new spending that would be funded without any tax hikes, according to a source familiar with the matter. The proposal would spend $974 billion over five years and $1.2 trillion if continued over eight years, the source said. The senators did not release details of the plan, but the source said it would remain focused on core infrastructure projects.

But some Democrats want President Biden to abandon bipartisan talks and pursue his initial $2.3 trillion American Jobs Plan unilaterally. The measure, first unveiled at the beginning of April, would make massive investments in the nation's crumbling roads and bridges, as well as transit systems, green energy, veterans' hospitals and care for disabled and elderly Americans.

"Why let Republicans decide the size of an infrastructure bill when reconciliation is a perfectly legitimate process (used unapologetically by the GOP when they were in power) to do a bill that will actually make a difference?" tweeted Sen. Chris Murphy, D-Conn. "It's not cheating to use the rules."

Progressive lawmakers are increasingly agitating to use budget reconciliation, an obscure Senate tool that allows them to bypass Republicans and pass legislation using their slimmest-possible majority, as negotiations drag into their fourth week. But the push puts them at odds with the White House, which has signaled it's open to pursuing a bipartisan deal.

"Let's face it. It's time to move forward," Sen. Elizabeth Warren, D-Mass., said during an interview with CNN. "The Republicans have held us up long enough."

That sentiment was echoed by Rep. Pramila Jayapal, the chair of the 100-member House Progressive Caucus, who maintained that she would not vote for a bill unless it included significant funding to address climate change.

"NO way that I’m supporting an infrastructure package that doesn’t invest in fighting the climate crisis," Jayapal, D-Wash., tweeted on Thursday. "Who’s with me?"

With Republicans adamantly opposed to any tax hikes to fund the measure, Democrats are also starting to independently pursue a massive infrastructure bill.

"We’re pursuing two tracks: one bipartisan and one reconciliation," Senate Majority Leader Chuck Schumer, D-N.Y., told reporters Tuesday, adding: "It may well be that part of the bill that'll pass will be bipartisan and part of it will be through reconciliation. But we're not going to sacrifice the bigness and boldness in this bill."

Still, it's unclear whether the party could secure the support of all 50 Democrats in order to pass a measure using reconciliation: Sens. Joe Manchin of West Virginia and Kyrsten Sinema of Arizona are both in the bipartisan group working on an infrastructure bill. Manchin also indicated Tuesday that he wants to see bipartisan talks continue and is not ready to support passing a package without Republicans.