Do you smell what the Rock is cookin’ – for his cheat meal day?

While he doesn't always necessarily cook his own cheat meals, Dwayne “The Rock” Johnson – who co-stars in “Hobbs & Shaw,” which won the weekend box office, bringing in more than $180 million worldwide – certainly knows how to chow down on days when he allows himself to break from his strict, healthy diet.

“It’s like church,” Johnson told “Tonight Show” host Jimmy Fallon. “You work out hard and once a week you treat yourself and I partake in that.”

Before he devours his feast - which he usually does while watching something on his computer - the 6-foot-5-inch, 260-pound Johnson makes sure everyone is asleep.

Below are some examples of how much it could cost you if you wanted to eat like The Rock does at midnight once a week. 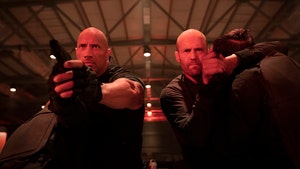 Here's how the franchise made its billions.

The average cost of a sushi roll – typically cut into eight pieces – in the Los Angeles area is between $8 and $10. If you want to eat like The Rock, order (at least) four rolls, which will set you back close to $40. However, you'll likely have to order closer to 12-15 rolls in order to eat like The Rock (as seen in the post below).

The cheat meal Sunday Sushi Train 🍣 🚂 rolled on this past weekend with some power and a ton of that wooosabi 🔥 Great new doc on Netflix about one of my fav country artists, the icon himself, Johnny Cash. I wear the black for the poor and beaten down.. livin’ in the hopeless, hungry side of town. If you ain’t eatin’ - then you ain’t cheatin’. Enjoy your cheat meals my friends and excuse me while I take greed and gluttony to new levels. #FilthyAnimal #SooshTrain 🥢

At about $13 to $15 per pound for a ribeye cut, you’ll likely shell out around $30 total to eat a steak like The Rock. Johnson is known to devour a 33 oz. ribeye in one sitting, combined with a “loaded” baked potato.

It’s not pretty, but it’s heavenly. #CheatMealSunday as I needed some good cheat day fats so I went with a 33oz Bone In Ribeye with a 1 pound loaded baked potato. Whole heartedly enjoyed in my office earlier this evening. For the record, “Bone In Ribeye” was my nickname in college on Saturday nights. TMI. Enjoy your cheat meals my friends - they’re well earned 👊🏾🥩🥔

The typical price for pre-mixed pancake mix is about $4, and if you make them like Johnson, you don’t need milk or eggs (just add water). He does, however, add in semi-sweet chocolate chips (a bag is about $3) and tops off his batch of fluffy treats with syrup (about $3-$4). Your total: About $10.