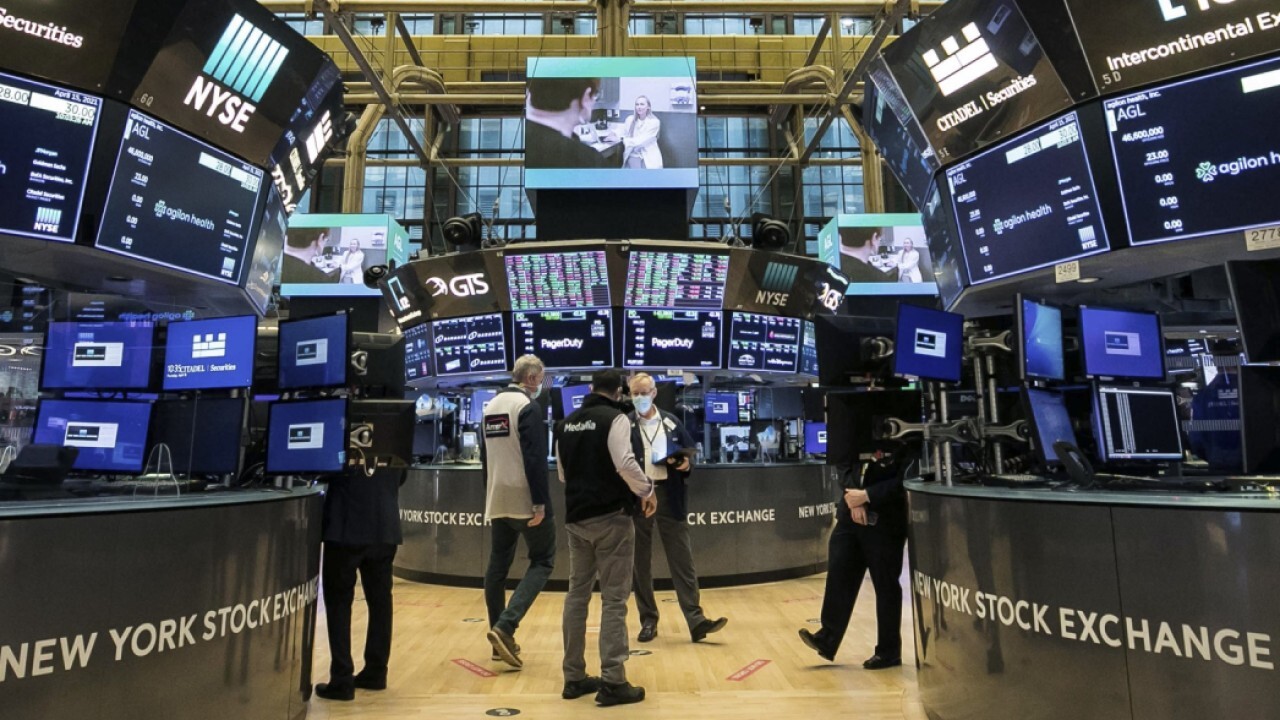 NYSE eyeing possible September reopening of the floor to media outlets but could be pushed back: Gasparino

Sources tell FOX Business' Charlie Gasparino that the NYSE has opened limited media presence on its 2nd floor but most networks have balked at a return.

As New York City slowly reopens for business, one of the world’s most popular and historic business television studios is making plans to reopen as well.

The floor of the New York Stock Exchange, which has been closed to the media since March of last year because of the COVID-19 epidemic, could be eyeing a possible September return, according to people with direct knowledge of the Big Board’s thinking on the matter.

In the coming weeks, NYSE staff will be contacting media outlets that have a presence on the floor about the possible reopening and to discuss safety protocols, these people say. The situation, these people add, is fluid and largely depends on the continued receding of the pandemic; earlier in the week, New York City Mayor Bill de Blasio announced that some COVID restrictions such as outdoor mask-wearing could be eased amid a decline in cases, deaths and people needing to be hospitalized.

STOCKS REBOUND FROM TWO DOWN DAYS

Sources say the NYSE is trying to get media back onto the floor as soon as possible, and while there's no firm date, it could be on a rolling basis with some television outlets airing from the floor more immediately than others. A spokesman for the NYSE declined to comment on the specific opening date.

The NYSE floor is home to several cable media outlets including FOX Business, CNBC, Cheddar, and Yahoo Finance, owned by Verizon. After the March 2020 lockdown, the NYSE offered spaces on the second-floor gallery to outlets that wished to maintain some presence. Cheddar is one of the few outlets to have maintained a presence even as traders began filtering back to the floor in late May.

As electronic trading has largely replaced the hustle and bustle of the floor, the thousands of human traders have largely been replaced by computer servers located in New Jersey data centers that fulfill the key exchange function of matching buyers and sellers of stocks. Today, only a few hundred-floor traders and brokers remain, and since the pandemic hit, those numbers remain further depressed as firms worried about the safety of their personnel.

The absence of media presence since COVID has also deprived the NYSE, a unit of the Atlanta-based Intercontinental Exchange, of a powerful marketing tool in its quest to win lucrative new listings of companies and initial public offerings away from rival Nasdaq. At least before COVID, the NYSE floor had made a comeback as a television studio where reporters would live broadcast the iconic opening and closing bells that signal the beginning and end of the trading days, and interview floor traders during times of market volatility.

The NYSE has marketed its hybrid model of computerized trading and occasional human interaction with orders as something that gives it an edge over the fully-electronic Nasdaq in terms of execution, thus allowing it to charge higher listing fees.

One problem with convincing the media to come back to the floor is the absence of traders. The NYSE has put numerous safety precautions into place since the reopening of the floor: thermal temperature screenings at the door, plexiglass dividers set up around the trading booths and a strict mask-wearing policy with no eating or drinking on the floor.

While the NYSE has been open to traders since June 17, only around 150 of the usual 300 have been working on the floor with many operating remotely. Some of that is the result of floor capacity restrictions imposed by NYSE management. But floor traders attribute much of the decline to COVID fears that have driven some of the big banks including UBS, JPMorgan, and Bank of America to close their booths indefinitely, and many independent traders to prefer to work remotely.

Citibank, for example, previously reopened operations but pulled traders off the premises again following a wave of new cases. Goldman Sachs is among the few large firms to have reopened its floor operation. Spokespersons for the banks had no immediate comment."

Several of these institutions have reportedly refused to sign the NYSE’s liability waiver to avoid the risk of potential litigation if employees contract the virus while at the Big Board.

"Some people just don’t want to come back", one trader tells FOX Business, "the place is literally a petri dish for infection," since the floor has no windows where traders operate and few entrances and exits. The windows that exist are on the second-floor balcony and it’s unclear if they can be opened.

"I don’t think I’ll ever be back five days a week", another trader tells FOX Business, "I don’t need to be on the floor 100% of the time to give my customers what they want."