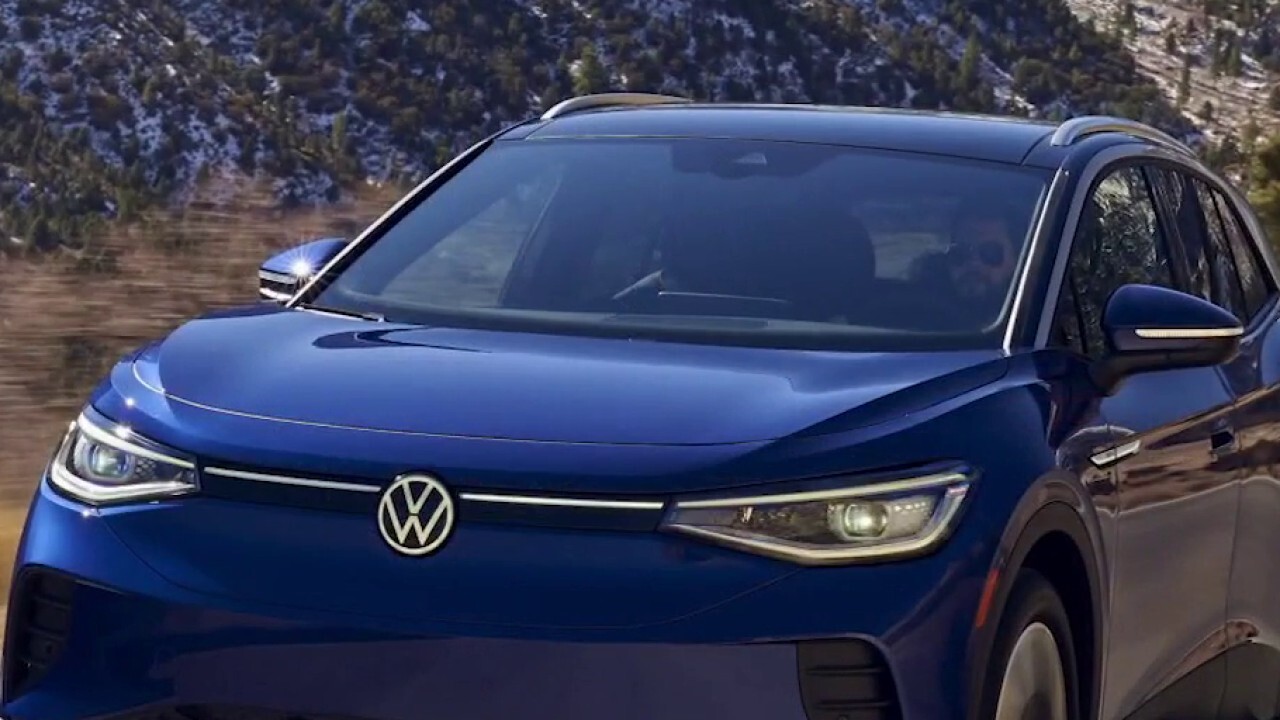 Volkswagen is charging ahead with deliveries in the United States of its new all-electric SUV, the ID.4, in an effort to provide the average American with a more affordable alternative to giants in the market like Tesla.

FORD, GM AND VOLKSWAGEN SHARES ARE HOT THANKS TO ELECTRIC-VEHICLE MANIA

President Biden, who is promoting electric vehicles in an effort to fight climate change, favors expanding the EV tax credit and has pledged to help build 500,000 more charging stations as well as increase fuel economy requirements.

In comparison to Tesla, Volkswagen USA CEO Scott Keogh said the automaker already has 650 American dealers across the country who are ready to sell the ID.4. However, the SUV has an average of 250 miles of range on a single charge, just above the 230 miles on Tesla's entry-level Model Y. Tesla's Model S is well above that range at 400 miles.

Keogh argued that 250 miles is plenty of range, noting the average American drives about 30 miles a day.

"What you have to do is drive the car, use the car, get used to electric cars and you’ll find out that anything above 250 in my mind is plenty of range for normal usage," Keogh told FOX Business' David Asman on Monday.

He acknowledged Volkswagen will continuously work to improve the vehicle's range but emphasized that competing with Tesla and others with vehicles costing above $100,000 is not "the name of the game."

"If you look at this vehicle, it competes in the compact SUV segment," Keogh said. "The average price is $32,000 to $34,000, so that's where all of our efforts are. Get a great car at $32,000 to $34,000 so normal Americans can drive them and enjoy them, not just people buying their fourth or fifth car...we want to drive adoption, we want people to experience this cool technology."

Automakers, including startups Lucid, Bollinger, Rivian and Workhorse, plan to introduce 22 new EV models in the U.S. this year after having rolled out six last year, according to consulting firm LMC Automotive.

General Motors, Ford and Volkswagen plan to spend a combined $77 billion developing global electric vehicles over the next five years, with models from pickup trucks to small SUVs.

GM has gone so far as to announce a goal of ending gasoline- and diesel-fueled passenger vehicles entirely by 2035 – and to become carbon-neutral by 2040.

But selling to the average American will likely be an uphill battle. Only 260,000 fully electric vehicles were sold last year in the United States out of a total new-vehicle market of 14.6 million.

Two polls late last year offered a glimpse of Americans’ appetite for electric vehicles. One, by Consumer Reports, showed that only 4% of adults with a driver’s license planned to acquire an EV the next time they buy a vehicle. An additional 27% said they would consider one. About 40% express some interest — but not for their next purchase. About 29% don’t want an EV at all.

Likewise, when J.D. Power surveyed people who intend to buy or lease a new vehicle in the next 18 months, only about 20% said they were likely to buy an EV. Roughly 21% were unlikely. The rest were undecided.

LMC predicts U.S. sales will rise this year to 359,000 EVs, taking off in 2022 and reaching over 1 million the next year. By 2030, LMC forecast U.S. sales of over 4 million EVs. Yet even that would represent only one-quarter of the overall market.

Still, encouraging signs emerged in February, when EV sales rose 55% from a year ago to 18,969, according to Edmunds.com.

Analysts with Deutsche Bank lifted their price target on buy-rated Volkswagen to €270 from €185 per share in a note to clients Monday, estimating VW's electric-car business alone could be worth $230 billion.

The analysts believe the German car company could come "very close to Tesla's BEV sales" this year, and with the global rollout of the ID.4, see a "good chance that VW could surpass Tesla's BEV sales as soon as next year, which should increase the credit given to its EV strategy."

Volkswagen announced last week that electric vehicles have become a "core business." The company is planning to cut battery costs with six cell factories up and running in Europe by 2030.

By 2025, Volkswagen expects to produce 1.5 million electric vehicles globally. Over the next five years, Volkswagen is investing 73 billion euros ($86 billion) on digital and EV technologies, up from its earlier plan to spend 60 billion euros.