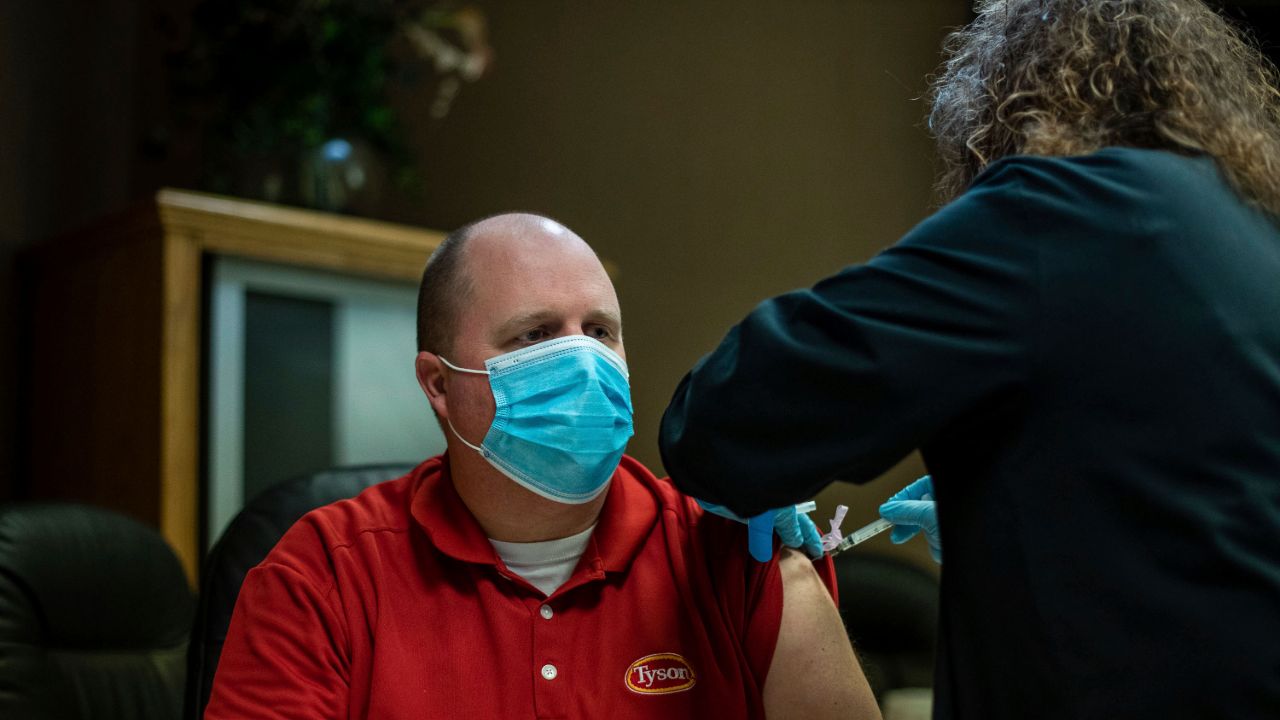 Tyson Foods on Wednesday announced plans to offer up to four hours of compensation for workers who choose to receive the COVID-19 vaccine off-site, and outside of their regular work hours.

The meat processing company already offers on-site vaccinations at its U.S. plants, though this option is contingent upon vaccine availability.

News of Tyson’s latest policy comes one month after Tyson announced a partnership with Matrix Medical to deploy mobile health clinics to aid with vaccine administration and COVID-19 education. Tyson, meanwhile, is not currently requiring its employees to get the vaccine, but rather “strongly” encouraging it.

Hundreds of Tyson's workers have already been vaccinated, the company claims. These workers mostly include those on Tyson's health care staff, of employees over the age of 65. (AP Photo/Charlie Neibergall)

“This incentive is an additional way we can encourage our frontline workers to receive the vaccination, which we believe is another important protective measure,” said Johanna Söderström, executive vice president and chief human resources officer for Tyson Foods, in a news release issued Wednesday. “We’re ready to vaccinate more of our people, especially through the free, on-site vaccination program we’ve developed, however, vaccine availability continues to vary by state.”

Tyson Foods claims that “several hundred” of its employees have already received the vaccine, with another 1,000 expected at its plants in Illinois, Missouri and Virginia in the coming week.

However, well over 100,000 of its remaining team members in the U.S. currently remain unvaccinated — a number that the United Food and Commercial Workers International union is hoping to change via a recent campaign to move meatpacking and grocery workers higher on the list of vaccine eligibility, even ahead of seniors.

“Those folks that have to keep our economy going, our food supply going, should in fact be next,” said Marc Perrone, UCFW president.

Tyson Foods, along with several other meat producers, had also come under scrutiny last summer, following outbreaks of COVID-19 that temporarily shuttered plants and paused production at major facilities across the United States. In November, the son of a deceased Tyson worker even filed a lawsuit against the company, alleging negligence “wanton disregard for worker safety” stemming from accusations that some Tyson managers were making bets on how much of the workforce would contract COVID-19 before the pandemic’s end.

Tyson Foods subsequently suspended the managers and supervisors allegedly involved in the scheme, the company confirmed at the time.

In announcing its new policy on Wednesday, Tyson Foods joins several other food production and restaurant groups offering paid hours for employees choosing to get vaccinated for COVID-19, including McDonald’s, Kroger, Darden Restaurants and Trader Joe’s, among others.