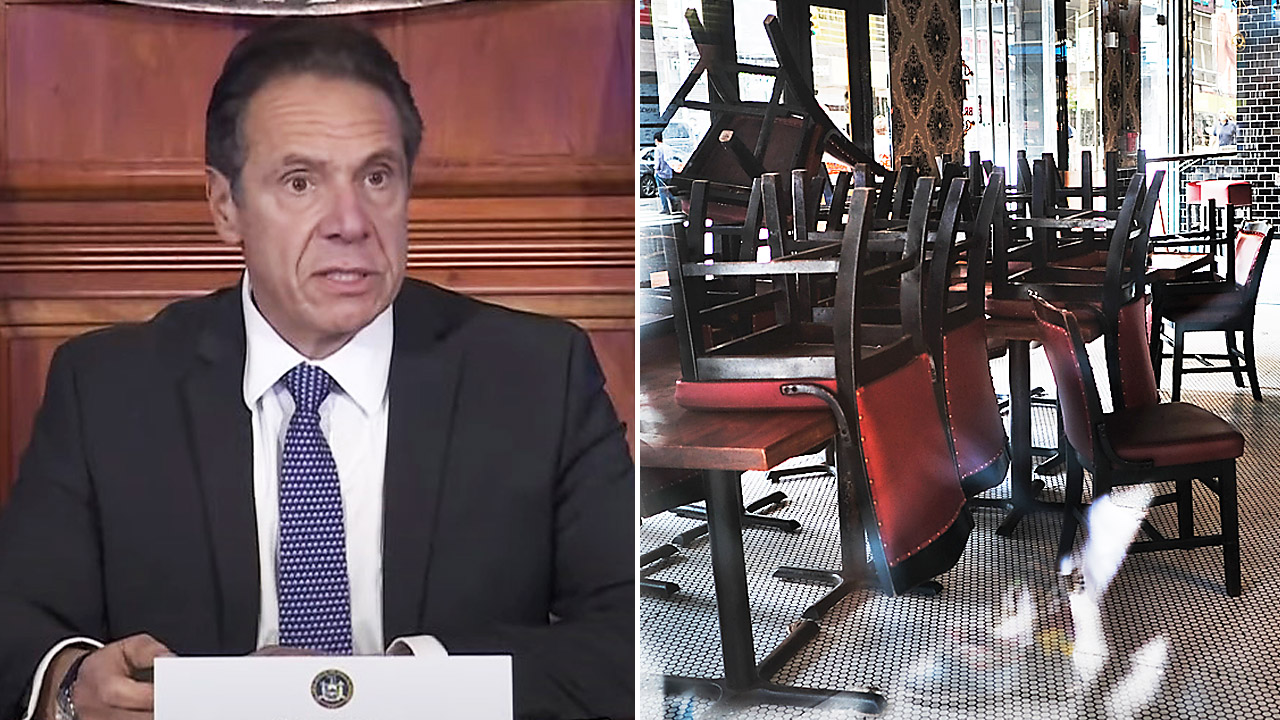 With New York Gov. Andrew Cuomo ordering indoor dining to close again in the Big Apple, restaurant owners already feeling the coronavirus squeeze are worried about laying off workers -- right before the holidays.

“I kept my place fully staffed for as long as I could, but I was bleeding money,” Michael Vendome, who owns Nino’s 46 and Nino’s AQ Italian restaurants in Manhattan and Queens, told FOX Business Friday. “The last thing I want to do is not have these hardworking people not have money for the holidays, but the city left me no choice.”

He said a recent 10 p.m. curfew already has forced him to cut staff - but the shutdown, which begins Monday, could result in laying off between 85 to 90% of staff.

Takeout, delivery and outdoor dining still are allowed – but with winter approaching the reality is diners may not want to sit outside.

“We can’t operate with outdoor and takeout, and expect to even break even,” Vendome said. “We’ll be in the red tremendously.”

Outdoor dining was already weather dependent, with business plummeting in the rain. Soon, temperatures will drop with the season.

“The forecast next week shows lows of 20, 21, 27 – with snow three days,” Vendome said. “No one is dining outdoors in that condition.”

The NYC Hospitality Alliance, an industry group, also blasted Cuomo’s move Friday, arguing that indoor restaurant dining has been linked to just a tiny fraction of new cases – compared to other types of gatherings.

According to data released by New York State Contact Tracing, small gatherings drove 74% of all infections, while restaurants and bars were reported to drive 1.4% of infections. The incongruity did not sit well with the hospitality alliance.

"Only New York City's restaurants are being closed even when hospitalization rates upstate are double the city's rate,” the group said in a statement.

The data was collected from 46,000 cases between September and November.

Without restaurants, more people will hang out in small gatherings at homes, which the data indicates have contributed to the spikes. Vendome said this represents “flawed logic.”

Although the city reopened indoor dining at 25% capacity back on Sept. 30, it helped restaurants, but only a little. Noting that the restaurant business in pre-COVID New York "was hard enough" Vendom said now "imagine slashing three-quarters of seating.”

Still, "it was better than zero,” he said which is what he will face beginning Monday.

“Hospitalizations have not stabilized, and with a rising infection rate and NYC’s density, this means that indoor dining is too high of a risk,” Cuomo said.

The governor’s office reported more than 10,000 new cases in New York statewide on Friday, at a 4.98% positive rate, and 87 coronavirus-related deaths.

New York City Mayor Bill de Blasio supports the new ban “100%,” even though, he said previously, nearly 100,000 people went back to work when the city reopened its indoor dining at the end of September.

“I feel for them,” he said of restaurant businesses. “But I know in my heart we have got to stop the spread of this virus quickly to be able to turn this situation around.”

Justin Brannan, a Democratic city councilman, proposed allowing restaurants and bars to use sales tax money collected as an emergency grant, rather than paying it to the city, to stem some losses. He also also called for more federal coronavirus aid.

Across the country, the coronavirus has decimated the restaurant industry. As of Dec. 1, at least 17% of all eating and drinking places – more than 110,000 establishments – have completely closed and are not open for business in any capacity, according to the National Restaurant Association. Vendome predicted that the new New York City ban would lead to even more closures.

Cuomo also announced Friday that PayPal would commit $1 million to discounts on orders with no cost to restaurants, and the Ritual e-commerce company will provide commission-free ordering at no expense to restaurants until April.

But those efforts fell short of satisfying Vendome.

“Our government officials are leaving us to die,” he said.

“I think it’s a shame that we’re eight months into this, and our leaders of New York have no plan to save the industry and keep trying to bury it instead.”