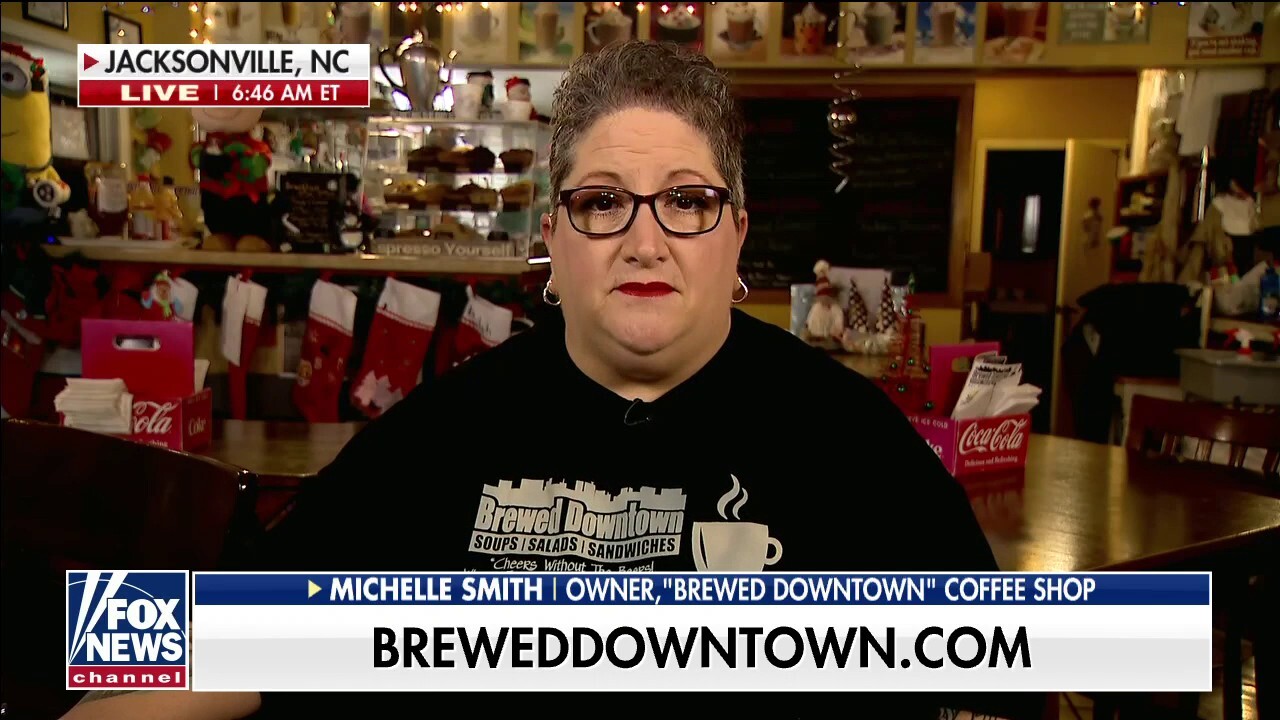 During an interview on "Fox & Friends" on Tuesday morning, a Navy veteran and small business owner directly addressed the supply chain issues that she and her company are experiencing right now — and she had a message for President Joe Biden.

Michelle Smith, owner of the Brewed Downtown coffee shop in Jacksonville, N.C., said on "Fox & Friends," "You think that you're doing well in your community, and everything is going as smooth as can be. But then all of a sudden they [certain suppliers] say, ‘Well, we're only going to take the upper thirty-five percent.’ Where do I fall? Less than one percent of their total overall nationwide sales."

In order to acquire supplies for her business, she said, "I started combing the internet — we have a couple of resources. There's a restaurant supply on the web that we could get to … We have kind of gone all over the state trying to look."

FOLDS OF HONOR CEO ON ‘FOX & FRIENDS’: MILITARY FAMILIES ARE GETTING HELP THIS HOLIDAY SEASON

She added, "I tried to order ahead. But once they realized they had a chokehold on everything and that everybody was going to be needing these products, it seemed like the prices kept going higher and higher and higher."

In order to acquire supplies for her business, Michelle Smith said, "I started combing the internet — we have a couple of resources." (Fox News)

Still, said Smith, "I'm looking at my budget and what I have to spend on these things."

She also said, "I was pulling my hair out, just trying to find it at any resource we could."

Michelle Smith on her big distributor taking her back, but with conditions: "I have a higher number case count, not a piece count — but a case I could buy one of, you know — let's say — a block of cream cheese that doesn't count as a case unless there's a whole box of it," she told "Fox & Friends."

Michelle Smith explained, "I really don't think [the president] understands that [more] than sixty-five percent of America is made up of nothing but small business." (Fox News)

Michelle Smith’s message to Joe Biden about the supply chain crisis and its impact: "I really don't think [the president] understands that [more] than sixty-five percent of America is made up of nothing but small business. We're also the number-one employer for all of the United States. It's not big business, it's not Microsoft, it's not Amazon — it's the small businesses per capita [in terms of] how many people we actually employ. Not to mention what we serve in our area."

She added, "I think we need to get the country back working [and] following their company guidelines. Let's get back to work. Let's start producing the things that we are running short of. Let's bring it all back to America. Quit depending on foreign countries to do our work for us."

Michelle Smith on whether her small business will survive: "We're struggling," she admitted to "Fox & Friends" on Tuesday. "I'm not going to lie. It's not been the easiest, especially the last 10 months or so. We were doing OK in the beginning of the pandemic. We were able to keep our doors open because we do have a drive-through. We do have limited access. We were bringing stuff to people's cars."

She added, "But [now], because we're spending more to get the same products that we were doing before — I just don't feel like I can raise my prices because of our local economy here, which is made up of young Marine and Navy personnel."

To learn more, check out the video at the top of this article.