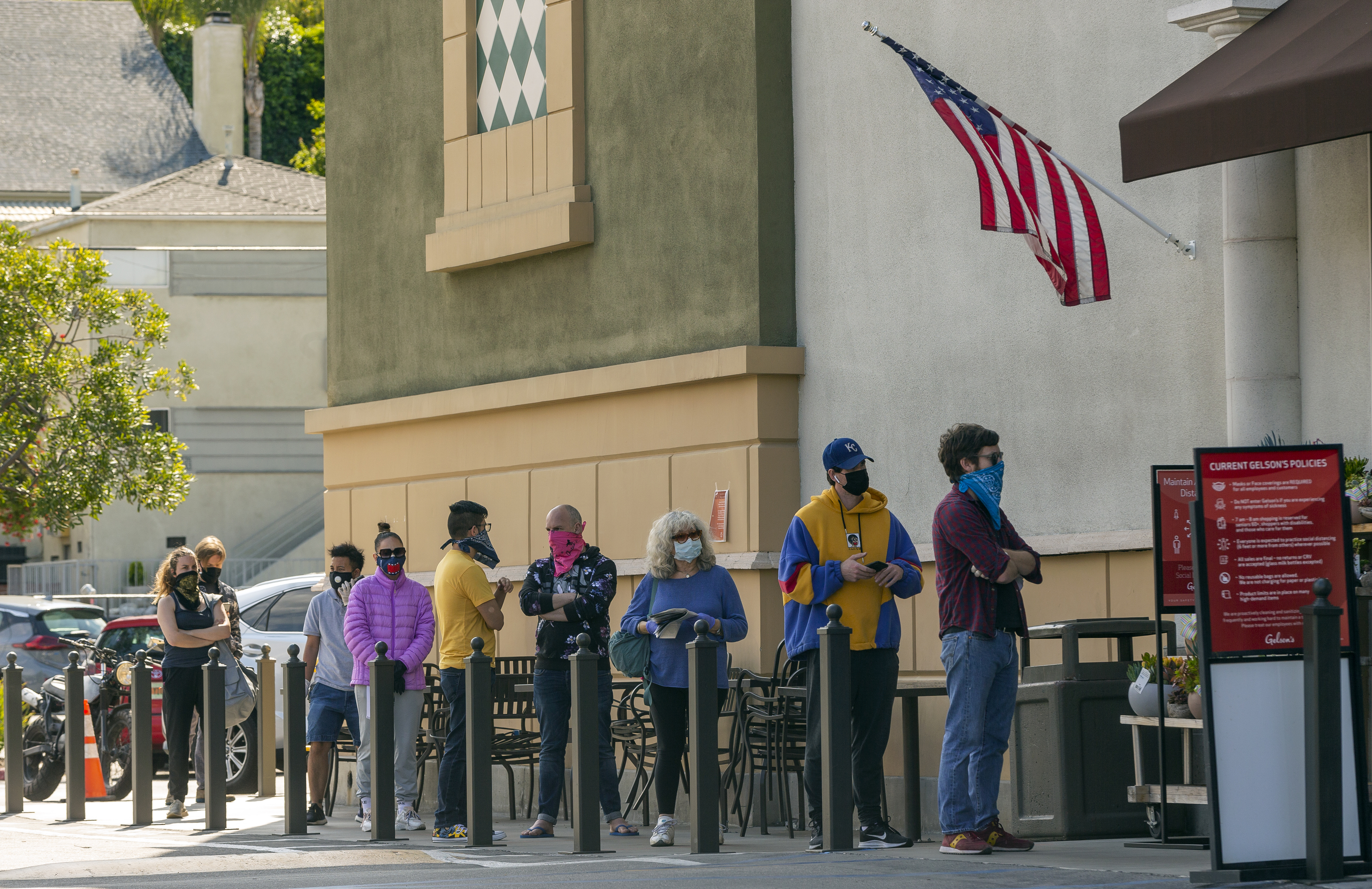 BERLIN — As unemployment rises and many around the world face the first rent payments after losing their jobs, governments are wrestling with when and how to ease restrictions designed to control the coronavirus pandemic.

Mandatory lockdowns to stop the spread of the new virus, which has so far infected more than 2.2 million people and for which there is no vaccine, have brought widespread hardship.

In a joint statement Saturday, a group of 13 countries including Canada, Brazil, Italy and Germany called for global cooperation to lessen the economic impact of the pandemic.

“It is vital that we work together to save lives and livelihoods,” they said.

Customers wearing face masks line up outside Gelson's Market while saying apart during the coronavirus pandemic, in the Los Feliz area of Los Angeles on Friday, April 17, 2020. (AP Photo/Damian Dovarganes)

The group, which also includes Britain, France Indonesia, Mexico, Morocco, Peru, South Korea, Singapore and Turkey, said it was committed to “work with all countries to coordinate on public health, travel, trade, economic and financial measures in order to minimize disruptions and recover stronger.”

The countries emphasized the need to maintain “air, land and marine transportation links” to ensure the continued flow of goods including medical equipment and aid, and the return home of travelers.

In the United States, the debate has taken on partisan tones ahead of this fall's presidential elections. Republican President Donald Trump urged supporters to “liberate” three states led by Democratic governors, tweeting the kind of rhetoric some have used to demand an end to stay-at-home orders that have thrown millions out of work.

As seen through a window, President Donald Trump speaks about the coronavirus in the James Brady Press Briefing Room of the White House, Friday, April 17, 2020, in Washington. (AP Photo/Alex Brandon)

Most governments remain cautious, even as the economic toll rises. Public health experts warn that easing shutdowns must be accompanied by wider testing and tracing of infected people to keep the virus from coming back.

Singapore, which has been held up as a model for other nations after taking strong measures to clamp down on the virus, reported a new daily record of 942 infections Saturday that saw its total surge to 5,992.

The number of cases in the city-state has more than doubled just this week alone amid an explosion of cases among foreign workers staying in crowded dormitories, that now make up 60% of Singapore’s infections.

Japan also reported a fresh surge of 556 new cases Saturday, pushing its total to over 10,000. Prime Minister Shinzo Abe expressed concern Friday that people were not observing social distancing and announced a 100,000-yen ($930) cash handout to each resident as an incentive to stay home.

In Africa, the pandemic is only just getting underway. The continent now has more than 1,000 coronavirus deaths, according to the Africa Centers for Disease Control and Prevention. Fifty-two of the continent’s 54 countries have reported the virus, with the total number of cases more than 19,800 as of Saturday morning.

Top leaders of China’s ruling Communist Party called for deficit spending and a more flexible monetary policy after the economy shrank 6.8 percent in the first three months of the year.

People wearing face masks to help protect themselves from contracting the coronavirus COVID-19 as they cross a street in Hong Kong, Saturday, April 18, 2020. (AP Photo/Kin Cheung)

France’s lower house of parliament approved an emergency budget overnight that takes into account the government’s 110 billion euro ($120 billion) plan to save the economy from virus-related collapse. The government has warned that France’s economy, one of the world’s biggest, could shrink 8% this year and see its worst recession since World War II.

South Korea's Health Minister Kim Gang-lip said Saturday that new guidelines could be issued soon that officials have said would allow people to engage in “certain levels of economic and social activity.”

The East Asian country was among the 13 nations to issue the joint statement on protecting global trade. The declaration also stressed “the importance and critical role of the scientific community in providing guidance to governments,” and suggested pooling scientific resources and efforts to tackle the pandemic.

While most of those sickened by the virus recover, the outbreak has killed at least 154,000 people worldwide, according to a Johns Hopkins University tally based on figures supplied by government health authorities around the globe.

A woman, wearing scrubs, a protective face mask and pushing a stroller, walks past security forces during a curfew ordered by the city mayor in an effort to prevent the spread of the new coronavirus, in Soacha, Colombia, Friday, April 17, 2020. (AP P

The number all but certainly underestimates the actual toll. Authorities said that almost everywhere, thousands have died with COVID-19 symptoms — many in nursing homes — without being tested for the virus, and have thus gone uncounted. In Britain, with an official count of about 14,600 dead, the country’s statistics agency said the actual number could be around 15% higher.

China on Saturday reported a nearly 40% increase in its death toll to 4,632 victims, reflecting a major upward revision made the previous day by authorities in Wuhan, the nation’s hardest-hit city.

An Associated Press tally from news media reports and state health departments indicates 6,912 U.S. deaths have been linked to coronavirus outbreaks in nursing homes and long-term care facilities. The U.S. government has not been releasing a count.

Protesters fed up with the economy-strangling restrictions have taken to the streets in several U.S. states. In Idaho, where the governor is a Republican, scores of protesters not wearing masks stood shoulder-to-shoulder Friday. Some carried signs claiming the coronavirus is a hoax.

“LIBERATE MINNESOTA!” “LIBERATE MICHIGAN!” “LIBERATE VIRGINIA, " Trump said in a tweet-storm in which he also lashed out at New York Gov. Andrew Cuomo, a Democrat, for criticizing the federal response. Cuomo “should spend more time ‘doing’ and less time ‘complaining,’” the president said.

Governors of both parties suggested they would move carefully, with some warning that they can’t do it without help from the federal government to expand testing for the virus.

Responding to pleas from governors for help in ramping up testing, Trump put the burden back on them: “The States have to step up their TESTING!”

The American president, who has repeatedly expressed his desire to see businesses reopen quickly, had his health team lead an extensive briefing outlining that adequate testing capacity exists to get states through the first phase of White House guidelines on how they should reopen.

Texas Gov. Greg Abbott said stores could begin selling curbside, nonessential surgery could resume and state parks could reopen. In Florida, Gov. Ron DeSantis said municipalities could reopen beaches and parks if they could do so safely.