A loaner couture Valentino gown that Lady Gaga wore to her award-winning night at the Golden Globes — and apparently left behind in her hotel room — is up for auction after the dress was discovered by a housekeeper tasked with cleaning the superstar's hotel room, but the item, which should have been returned, was reported missing by the designer's company just days ago, according to officials and a TMZ report.

Gaga, whose real name is Stefani Germanotta, wore the Valentino Haute Couture gown to the 2019 Golden Globes on Jan. 6 at the Beverly Hilton Hotel in Beverly Hills, where she took home an award for her role in “A Star Is Born.”

But it seems Gaga and her team of reps and stylists left the dress behind, so said a hotel housekeeping employee who was in charge of cleaning the room.

The woman, 24-year hotel employee Sara Corea, turned the gown over to lost and found, she said according to a letter of authenticity.

“I’m always present working on the Golden Globes events on January every year,” according to the letter. “The Artist (singer) ‘Lady Gaga’ left me this dress that she used for the day of the awards … After the time legally held by lost and found they gave it to me as a gift from her and today I want to auction the dress.”

A Beverly Hills Police Department spokesperson told FOX Business a representative from Valentino reported the dress missing on Friday, but a spokesperson for the auction house that's listing that dress said they had not yet been contacted by any authorities. Cops are not investigating the item as stolen, the police spokesperson said, noting that the filing was merely an incident report to reflect that the item could not be located at the time.

On Sept. 3, after no one came for the dress, Corea claimed the hotel allowed her to keep it. A representative for Lady Gaga did not immediately respond to FOX Business' request for comment.

LADY GAGA RELEASING BEAUTY LINE TO BE SOLD ON AMAZON

"The cleaning lady, when she found it, she turned it into the Beverly Hilton lost and found. They held onto it for over 8 months and then, per their policy, it was given to her after no one claimed it," said Nate D. Sanders Auctions spokesperson Laura Kirk when reached by FOX Business on Monday.  “It is unusual. We’ve never had a situation quite like this, but with everything we get, we vet it pretty thoroughly." 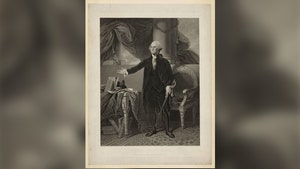 From the desk of George Washington, MLK: Bids for these historic writings starting around $18K in auction

Letters and manuscripts from founding fathers to civil rights heroes are on the auction block, for a pretty penny.

In an emailed statement to FOX Business, a spokesperson for the Beverly Hilton Hotel said they are still conducting an internal investigation, but "have no reason to believe the item was stolen."

The representative added: "We are working with all parties to retrieve the item and have it returned to its rightful owner as soon as possible."

The periwinkle blue dress was designed custom for Gaga by Valentino's creative director Pierpaolo Piccioli, the auction house states on its website.

In addition to the many images that were shared on the webpage, Nate D. Sanders also included the letter of authenticity provided by Corea, as well as the lost and found ticket from the hotel.

The auction house also contacted Valentino to ensure it was not illegally obtained, and so far has not learned of any reason to believe the dress is considered stolen, the spokesperson said. A representative for Valentino could not be reached for comment.

Lady Gaga won an award in the Valentino dress for Best Original Song in a motion picture from her smash hit with Bradley Cooper "A Star is Born."

"A Star is Born" went on to earn a reported $434.9 million dollars worldwide.

This report was updated to include information provided by a Beverly Hills Police Department spokesperson.