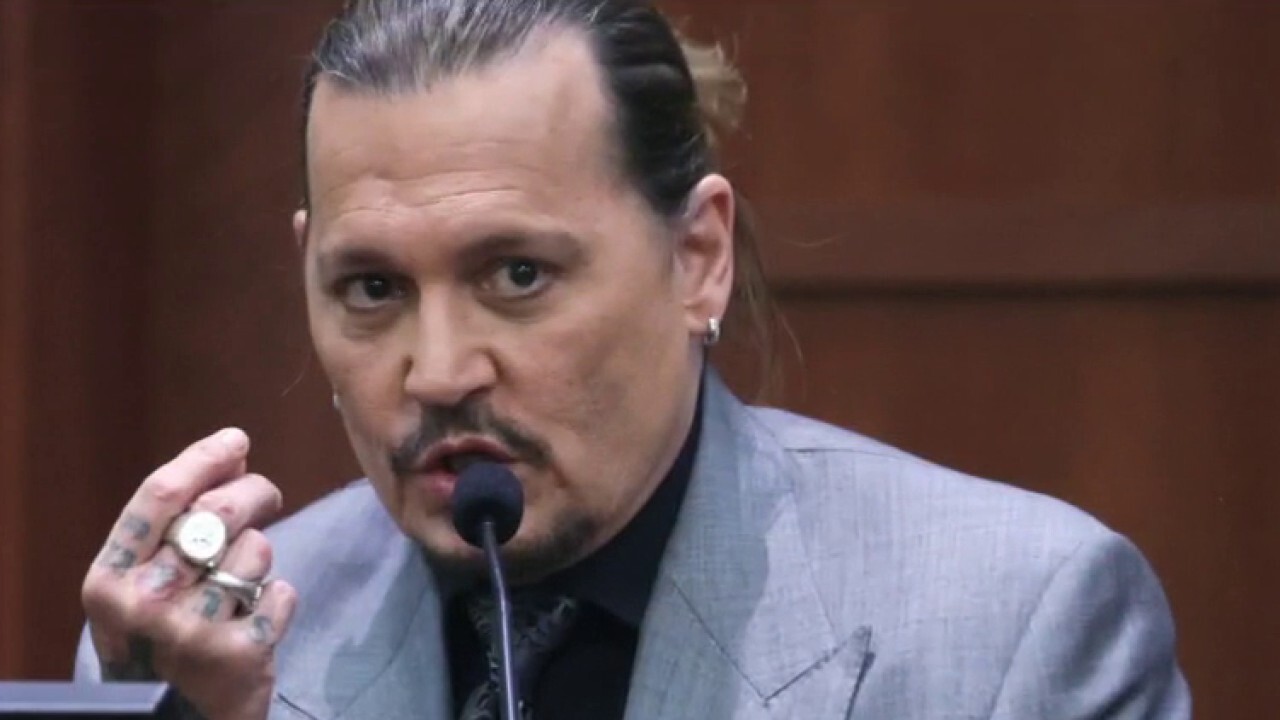 Nicole DeBorde discusses the latest developments from the trial on 'Fox Business Tonight.'

Johnny Depp and Amber Heard’s legal battles have lasted longer than their marriage.

The famous couple divorced in less than two years, but they’ve been at legal odds for four, so far.

WHAT IS JOHNNY DEPP'S NET WORTH?

Here's a by-the-numbers breakdown of their court cases, relationship timeline and net worth.

Johnny Depp and Amber Heard settled their divorce in 2016, but they've been at legal odds since 2019. (AP)

2016 – Depp, 58, and Heard, 36, reached a divorce settlement in August 2016 – five months before their divorce was actually finalized – which awarded $7 million to Heard, according to Page Six.

In a joint statement provided to the Associated Press (AP), Depp and Heard said, "Our relationship was intensely passionate and at times volatile, but always bound by love. Neither party has made false accusations for financial gain. There was never any intent of physical or emotional harm."

2019 – Depp filed a defamation lawsuit against Heard in March 2019 over an op-ed she submitted to The Washington Post, which was published in 2018, about being a survivor of domestic violence. Depp’s suit originally sought out $50 million in damages, claiming he lost work opportunities from Heard’s article. Heard is counter-suing Depp for $100 million under the claim that the Hollywood actor is trying to ruin her reputation.

2020 – Depp sued The Sun's publisher, News Group Newspapers, for libel over an entertainment article which described the actor as a "wife beater" in its headline. The lawsuit went to trial in England and Heard testified during the case. She claimed Depp "threatened to kill" her "many times," the BBC reported. In November 2020, Depp lost the case after a judge ruled the defendants had shown "what they published in the meaning which I have held the words to bear was substantially true," the AP reported at the time. Depp was denied an appeal, but he maintains that he hasn’t been violent toward Heard.

2022 – Depp’s defamation case began on April 12, in Fairfax, Virginia. The case is ongoing with the public watching closely.

Johnny Depp and Amber Heard got married on Feb. 3, 2015, at their Los Angeles home. The couple separated after 15 months of marriage. (John Shearer/WireImage)

2009 – Depp and Heard reportedly first crossed paths in 2009 when they co-starred in "The Rum Diary." The film debuted two years later.

2012 – Depp and Heard began dating in 2012 shortly after the actor "amicably separated" from French actress Vanessa Paradis, who he'd been in a relationship with for 14 years until June 2012, Us Weekly reported. Rumors circulated that Depp and Heard became romantically involved that summer. Media outlets upped their reporting on the celebrity couple by fall.

2014 – Depp and Heard got engaged in January 2014, according to a report from People Magazine. The news circulated after the pair were spotted leaving a West Hollywood restaurant. Onlookers reportedly noticed Heard was wearing an engagement ring.

2015 – Depp and Heard were married on Feb. 3, 2015, at their Los Angeles home. The pair tied the knot with a private ceremony and held a larger reception a few days later at Depp's private island in the Bahamas, according to Hello! Magazine.

2016 – Heard filed for divorce in May 2016. She also obtained a temporary restraining order against Depp alleging abuse, according to The Hollywood Reporter. In one reported instance, Heard claimed Depp threw a cellphone in a fit of rage, and it hit her face, according to the AP. Celebrity tabloid TMZ published photos of the restraining order filing and of Heard’s face. Depp and his team have continually denied Heard’s abuse allegations and has said that Heard was the one who acted violently during their 15-month marriage.

Johnny Depp and Amber Heard started their careers at different times due to their 23-year age gap. (Associated Press)

48 – Depp’s estimated net worth was $48 million in 2016, according to Forbes’ Celebrity 100 Earnings list, which ranks highest-paid celebrities in Hollywood by income. Depp hasn’t reappeared on the business magazine’s annual ranking.

Johnny Depp was once the highest-paid actor in the U.S., according to Guinness World Records. (Axelle/Bauer-Griffin/FilmMagic)

100 – Celebrity Net Worth estimated that Depp’s net worth is around $100 million when factoring in his reported real estate and asset portfolio and the $20 million he reportedly earns when signing onto a feature film. The celebrity news outlet cited Depp’s 2017 lawsuit against his former business managers, which revealed the actor’s earnings from 2003 to 2016.

650 – During his lawsuit against his former business managers, The Management Group, Depp claimed he lost $650 million in film earnings in the 13-year period due to mismanagement, according to Variety.

The Management Group counter-sued with documentation that detailed Depp’s spending, which included a $3.6 million annual expenditure for personal staff, a $30,000 expenditure on wine, a $75 million expenditure that went to acquiring 14 homes around the world and more. Depp and the Management Group settled their case in 2018, Fox News reported at the time.

7 –  When Depp and Heard’s divorce settlement awarded Heard $7 million in 2016, she claimed she would donate her settlement payout to the Children's Hospital of Los Angeles and the American Civil Liberties Union, according to TMZ. However, Depp’s recent defamation lawsuit against her has revealed that she’s only donated a portion so far.

Amber Heard entered the entertainment industry as a model and eventually became an actress. (LUCAS BARIOULET/AFP via Getty Images)

8 – Heard, 36, has a net worth of $8 million – including $7 million she got in a divorce settlement from Depp after a 15-month marriage, Celebrity Net Worth reported.

31 – Heard began modeling as a teenager, according to GOBankingRates –a personal finance resource. There are 31 professional modeling credits attached to her profile on Models.com, which include four advertisements, nine editorial features, 16 magazine covers and two fashion shows. Companies she’s worked with include L’Oreal, the Cannes Film Festival and Harper's Bazaar.