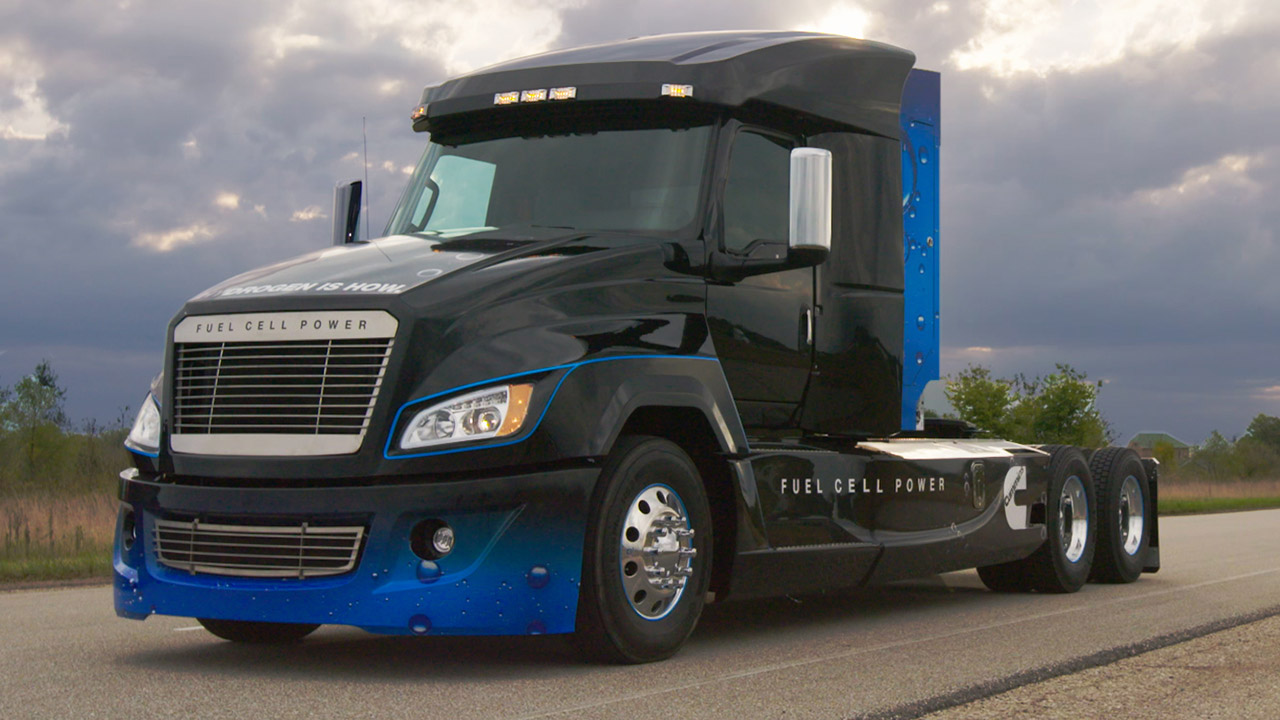 Cummins is confident that if it builds a hydrogen economy, its customers will come along for the ride.

The diesel-focused giant has outlined a dramatic shift toward the production of hydrogen fuel cell powertrains for vehicles and commercial equipment with an eye on helping itself and its partners reach carbon neutrality by 2050.

Cummins has built a fuel cell-powered semi-tractor prototype to demonstrate its tech. (Cummins)

The Indiana-based company detailed its plan during a virtual live-streamed Hydrogen Day event on Monday, which came after the recent acquisition of fuel cell developer Hydrogenics and a joint venture with hydrogen storage system manufacturer NPROXX.

Fuel cells combine hydrogen with atmospheric oxygen to generate electricity and are an alternative to large battery packs in zero-emissions vehicles. The hydrogen essentially stores the electricity used to create it from water through electrolysis, then the fuel cell reverses the process.

Cummins CEO Tom Linebarger told FoxBusiness.com that he personally was working on a fuel cell project at the company as far back as 1999, but that recent advances in technology have made it a more viable commercial prospect, even though there’s still a way to go.

The cost and scarcity of both hydrogen production and distribution infrastructures have been the main hurdles to its widespread adoption. Cummins executives said during the presentation that government investments in both will be required to put the total cost of operation of fuel cell powertrains on par with internal combustion engines, but that the pieces are starting to come into place in parts of the world, particularly in Europe and China. They calculate that entirely replacing the current global diesel fleet with green hydrogen and battery technology would require a 50 percent increase in electricity output over today’s levels.

Cummins is also getting in on that side of the effort by building the electrolyzers used to create hydrogen from water. To achieve carbon neutrality, however, they will need to be powered by renewable energy in order to create “green” hydrogen, which accounts for just 1 percent of global production today, according to the company.

“If you drive a battery car, Tesla or something in Indiana today, you're mostly driving a coal car, electricity from coal,” Linebarger said. “So who cares if you're using a battery? It's not zero-carbon coal. So there's got to be a big move from fossil fuel energy production towards renewable energy production.”

The motors and power control units Cummins are working on are also compatible with pure battery-powered vehicles, which is another market it can supply, but Linebarger sees hydrogen as a better fit for heavy, long-distance transport like trains and tractor-trailers.

“From an energy density point of view, weight density, new batteries are not as good as hydrogen tanks are," Linebarger said. "So if you've got a truck that's loaded up with weight, you're going to be better off with a lighter weight fuel than batteries.”

Hydrogen tanks can also be refilled quicker than it takes to charge a battery that can hold the same amount of energy, which means quicker turnaround times for operators. Most major truck manufacturers, including Daimler, Volvo and Toyota, along with startup Nikola Motors, have begun to work on fuel cell-powered long-haul trucks alongside battery-powered models aimed at local use.

Cummins is developing a fuel cell semi-tractor prototype with Navistar, but doesn’t have any major orders to announce yet. The company has a long list of customers for its diesel engines, however, and Linebarger feels that if it develops the “best powertrain” the partnerships will come, eventually.

A Cummins fuel cell-powered train built by Alstom is currently in use on a commuter line in Germany. (Cummins)

Cummins projects that by 2030 the market penetration for fuel cell-powered trains, like one it built with Alstom that’s in operation in Germany, will be just 10% and only 2.5% for trucks.

“This is why we have focused on a market like trains where the powertrain and the fuel costs represent 50% of the total operating costs and are much lower than the heavy-duty truck market, which is above 80%,” Cummins New Power Business President Amy Davis said.

Linebarger wouldn’t put a date on when he sees new diesel engine sales ending entirely, and expects it to vary by region. While early efforts in the space, including many of the 2,000 prototypes the company is already testing in various applications around the world, have focused on converting internal combustion engine vehicles and equipment, he sees the transition being driven by purpose-built fuel cell vehicles replacing the old ones as they are retired from service.

“People will do prototypes and other things with existing vehicles, but they will when production starts and they're off and running, it'll be new vehicles,” he said.