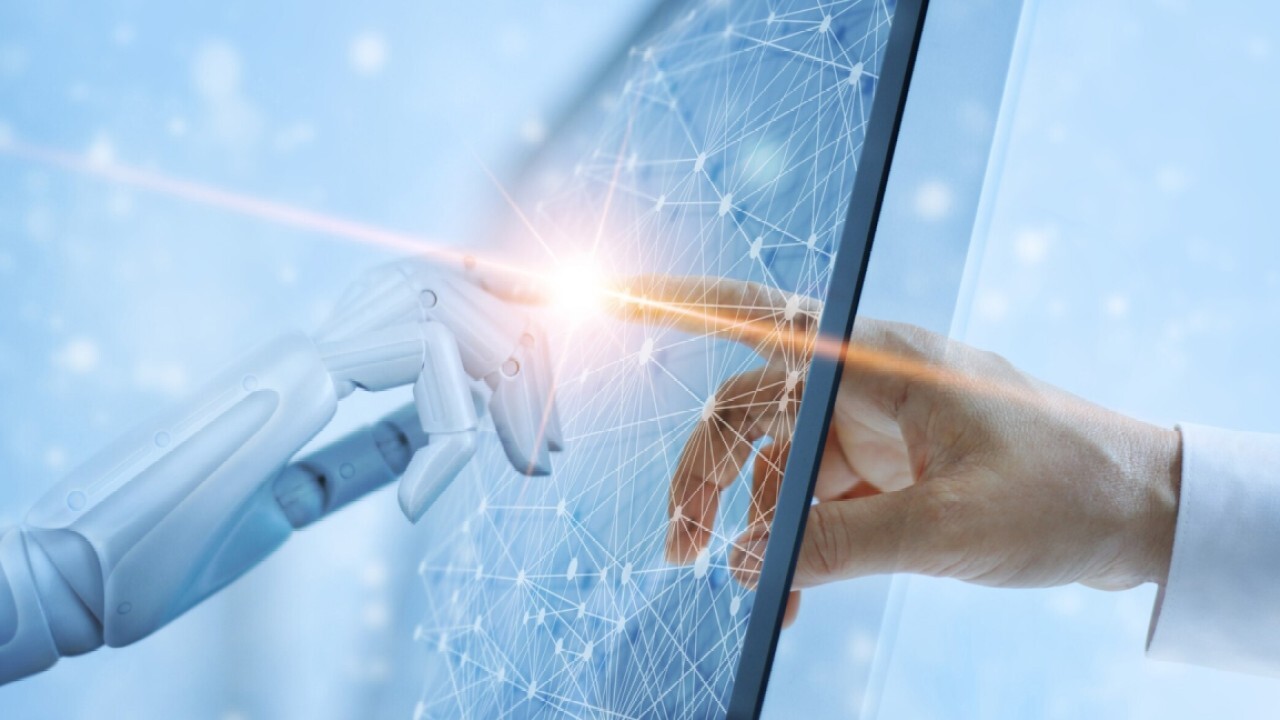 Amy McGovern is one of those rare people who moved to Oklahoma for the weather.

Which isn't to say she personally enjoys the tornadoes that regularly tear through the state or the routine pummeling with golf-ball-size hail. "I'm on roof number three in 15 years," she laughs.

But that severe weather is her reason for coming: A computer scientist who formerly worked in robotics, she was recruited by the University of Oklahoma's school of meteorology. And last fall, with $20 million from the National Science Foundation, she launched one of the country's foremost institutes applying artificial intelligence to weather and climate. As new techniques in machine learning become ubiquitous and yield startling applications, such as recognizing faces or mimicking human writing, her center is part of a new push to see if they can read the clouds.

Dr. McGovern's institute, which also includes six other universities and a variety of private partners, is part of that effort. In addition to developing artificial-intelligence methods to improve prediction of extreme weather and coastal oceanography, they are working to ensure the tools they develop are viewed as trustworthy by the human forecasters who will ultimately use them. "We're testing the whole cycle," she says. "We will actually save lives and save property."

AI is already making existing prediction methods more efficient and contributing to increases in the speed and accuracy of forecasting, and it shows promise for tracking the paths of severe weather like tornadoes and hail with greater precision. The technology isn't going to replace traditional weather forecasting but rather augment and strengthen existing methods.

There is enormous opportunity in more accurately forecasting and better preparing for severe weather. According to the National Oceanic and Atmospheric Administration, in 2020 there were a record-setting 22 weather and climate disasters that each did more than $1 billion in damage. Modelers estimate the recent freeze in Texas destroyed infrastructure and disrupted supply chains worth $90 billion. And for all the improvements in forecasting over the years, there is still a lot we don't know. According to Dr. McGovern, the government is fairly comprehensive in giving advanced warnings of tornadoes, anticipating 80% of them, but prone to false positives, with 80% of warnings turning out to be mistaken.

Since the beginning of modern weather forecasting in the 1950s, meteorologists have primarily relied on "numerical weather prediction" -- mathematical models that simulate the world and atmosphere in accordance with the physics of water, wind, earth and sunlight, and the infinite ways they interact. In the pursuit of an ever more detailed rendering, today's models incorporate about 100 million pieces of data each day, a level of complexity comparable to simulations of the human brain or the birth of the universe.

For decades, this has produced steady improvements in forecast accuracy. But in recent years, the proliferation of Earth-observation satellites as well as new sensors, like the air-pressure monitors in billions of mobile phones, have outstripped scientists' ability to integrate them into weather models. And even crunching a fraction of these data has demanded exponential increases in computing power to make timely predictions.

The latest artificial-intelligence techniques work in a fundamentally different way from older techniques by training neural networks on this deluge of data rather than on the laws of physics. Instead of using brute-force computation to forecast weather based on present conditions, these networks review data on weather from the past and develop their own understanding of how conditions evolve. Rudimentary AI techniques have been applied to weather and climate for decades -- the National Oceanic and Atmospheric Administration sponsored its first conference on AI way back in 1986 -- but recent advances in deep learning and greater access to computers capable of running them have enabled a swift uptick in research.

AI techniques aren't being used to generate forecasts on their own, at least not yet. That is partly because traditional methods are quite good: Two weeks ahead of the winter storm that clobbered Texas in mid-February, the Fort Worth office of the National Weather Service began advising that unusually cold weather was on the way, and by a week out many models were estimating its intensity within a few degrees. Ted Ryan, a meteorologist there, says they sometimes run forecasts through a sophisticated machine-learning algorithm to see if it delivers substantially different results from their own, but don't routinely integrate it into their forecast and messaging operations. "It's somewhere between a curiosity and a novelty."

Another challenge for AI is that it is best at predicting patterns that are common among the data it has trained on -- but weather matters most when it is outside the ordinary, such as the Texas storm, which tied for the coldest temperature since 1899.

AS TEXAS FREEZE GAS BILLS COME DUE, CUE UP THE LAWSUITS

Just because AI hasn't replaced traditional forecasting methods doesn't mean it won't quickly alter them, however. Current weather prediction is already so intensive in terms of computing power that it can run only on the world's fastest supercomputers, and scientists continually try to push the limits. Machine-learning techniques can reduce power usage by emulating parts of global weather models but with simpler computations and less power -- and little change in accuracy.

Sid Boukabara, principal scientist at the National Oceanic and Atmospheric Administration's Center for Satellite Applications and Research, thinks those gains will be significant. "For certain components, it could be 10 times more efficient to 1,000 times more efficient." But it is too early to know how much this will enhance the accuracy of numerical weather prediction as a whole.

For instance, the European Center for Medium-Range Weather Forecasts currently simulates the globe as a grid of squares that are 9 kilometers on a side (roughly 5 miles) and stacked 137 layers up into the atmosphere. Deputy Director Peter Bauer says each step up in detail requires an exponential increase in electricity: The center's newest supercomputer in Bologna, Italy, will consume as much power as 6,000 households. He and his colleagues are quickly approaching the limits of what they can afford or justify, he says.

This year -- relying on AI methods to boost efficiency -- the center will begin developing a new global model at a 1-kilometer resolution that will bring storms and oceanic eddies into better focus, says Dr. Bauer. "Bigger and faster machines give us ever greater computing power, but we need to radically change the code we run on them to be able to use them effectively."

Researchers see promise for AI in narrower applications, for example in using machine learning to create hyperlocal forecasts that are more relevant for the people receiving them. Even the best global models of weather are simulated at a spatial resolution of several kilometers, so they may accurately predict rain in your county but don't do as well predicting rain on your block. Researchers say deep learning may allow us to downscale from that coarser geography to finer-detail forecasts, similar to how it has been used to sharpen low-resolution photographs. In this case, it does this by supplementing weather forecasts from conventional methods with details such as topography in order to interpolate how broader weather patterns will be realized at specific locations.

Machine learning may also prove crucial for accurate "nowcasting" -- short-term forecasts computed at a rapid speed that isn't feasible for traditional methods. Last spring, a pair of scientists at Google Research showed that, without any physical laws explicitly encoded into them, deep neural networks could predict rainfall in the next eight hours better than other state-of-the-art models. Nal Kalchbrenner, one of the researchers, says they were actively working to increase the quality and time range of the forecasts. "This idea paves the way for AI to make broad and substantial inlays in the field of weather and climate science."

Even advancing an accurate weather forecast by an hour or two could have big implications for businesses, which are exposed to different risks than the typical household. "If I tell you it's about to hail, you can put your car in the garage," says Dr. McGovern. "If you're a car manufacturer or car dealer, and you have 1,000 cars on the lot, you can't move 1,000 cars in that amount of time." Last year, she co-wrote a study that showed machine learning improved short-term hail forecasts, and overcame limited amounts of global weather data by isolating and analyzing thousands of reports of individual hail storms. She is now working with NOAA on developing the techniques into an operational product.

Governments and big businesses have noticed the potential of AI. Last October, the NOAA and Alphabet Inc.'s Google announced a partnership to explore how machine learning could help the agency more effectively use satellite and environmental data. This January, the federal National Center for Atmospheric Research invested $35 million in a new supercomputer with architecture more suitable for the latest AI techniques. And both NOAA and its counterpart the European Center have recently published strategies for incorporating artificial intelligence into their work.

But, wary of the hype that envelopes all things AI, some leading researchers are cautious about overpromising. Stephan Rasp is no naysayer; he co-wrote one of the earliest studies showing that AI could efficiently emulate certain aspects of forecasting, and "artificial intelligence" is even in the name of the startup where he now works as a senior data scientist, Climate.ai. But as he sees it, much of the continuing research is still in the proof-of-concept stage, having successfully applied AI to simplified data sets but with few examples yet of actually improving weather and climate forecasts.

He thinks it may take a decade for the field to determine where AI can be useful and where it cannot. "If you have a hammer, everything looks like a nail. And I feel like that's what we are doing at the moment."