Law enfocement sources tell the New York Post he was found by guards, sprawled out on the floor of his New York City jail cell.

The Post reports guards discovered Epstein had neck injuries and was taken to the hospital.

So far, sources haven't made it clear how the multi-millionaire ended up injured, though investigators believe it could have been a suicide attempt, or a ploy to tranfser to a new facility.

According to WNBC, who first reported the incident, one law enforcement source claimed he also may have been attacked by another inmate.

Attorney Bruce Barket, who represents one of the men on Epstein's cell block,  told the local TV station his client and Epstein have both complained about conditions inside the facility - like poor plumming, bad food and rodents.

The 66-year-old financier is accused of luring children as young as 14 to visit his properties in Manhattan and Palm Beach, Florida, where he would pay for sex acts.

“I doubt that any bail package can overcome danger to the community,” he said upon announcing the decision.

Epstein's defense team argued he be released on a $77 million bail package, provide his private jet as collateral, wear an ankle bracelet and surrender his passports. 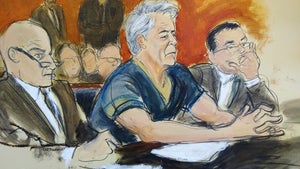 The financier, who owned luxury homes across the world, is currently being held in jail without bail for the alleged abuse of young girls between 2002 and 2005 in his Manhattan townhouse and Florida beachfront mansion.

Prosecutors fighting on behalf of the victims argued Epstein's assets, which add up to $559 million, gave him a "limitless" potential to flee.

Court documents outlining the distribution of his wealth show his cashflow stands at approximately $56 million.

He also still holds substantial properties from Paris to New Mexico, including a private island in the U.S. Virgin Islands.

Defense attorneys are expected to file their motions in a scheduling hearing next week.

The trial date for Epstein is not yet scheduled.

This is a developing story and will be updated.