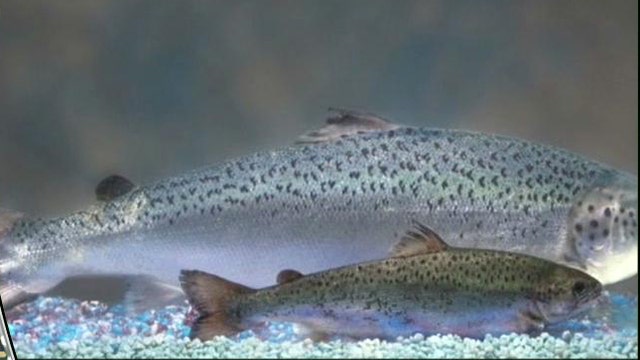 “Health of the Nation” host Dr. Mitchell Brooks on the benefits, and concerns raised, about genetically modified fish.

The Food and Drug Administration has lifted its import ban on a brand of genetically modified salmon after Congress blocked the fish from coming to U.S. until the agency finalized its labeling guidelines to inform consumers about what they are eating.

The salmon, which has been dubbed by some as “Frankenfish,” is the creation of Maynard, Massachusetts-based biotechnology company AquaBounty Technologies.

By using a growth hormone-regulating gene from Pacific Chinook salmon, along with a promoter gene from ocean pout, an eel-like marine animal, the company figured out a way to grow genetically modified Atlantic salmon year-round instead of only during the spring and summer.

The fish first won FDA approval in 2015, which was the first approval of a genetically engineered (GE) animal intended for food use by the agency.

However, in 2016, Congress later blocked the FDA from allowing the fish to be sold in the U.S. until it finalized its labeling guidelines alerting customers that the fish has been altered.

Additionally, that year, Congress also passed a law that directed the US Department of Agriculture to set a national mandatory standard for disclosing bioengineered foods.

On Friday, outgoing FDA Commissioner Scott Gottlieb released a statement saying it has taken the important steps to provide labeling guidelines related to the GE salmon and is officially “deactivating” the 2016 import alert that prevented the salmon from entering the U.S.

"With the deactivation of the import alert, AquAdvantage Salmon eggs can now be imported to the company’s contained grow-out facility in Indiana to be raised into salmon for food. As was determined during the FDA’s 2015 review, this fish is safe to eat, the genetic construct added to the fish’s genome is safe for the animal, and the manufacturer’s claim that it reaches a growth marker important to the aquaculture industry more rapidly than its non-GE farm-raised Atlantic salmon counterpart is confirmed," Gottlieb said in a statement.

What's more, the FDA said it analyzed the potential impact the genetically modified salmon would have on the environment and it found no "significant impact."

The FDA's move also comes despite a pending lawsuit filed by a coalition of consumer, environmental and fishing groups that are challenging the agency's approval.

George Kimbrell, legal director for the Center for Food Safety, which is one of the groups suing the FDA, told The Associated Press that AquaBounty's own tests have shown it's not 100 percent certain its salmon would be sterile and that concerns about it getting in the enivornment would grow if the company's operations were to expand.

AquaBounty CEO Sylvia Wulf said the company expects to get a final certification for its Albany, Indiana, growing facility in the coming weeks and the salmon will take about 18 months to grow to a harvest size of 10 pounds after they arrive.

However, Wulf added that it has been difficult to engage in sales discussions with companies since the ban, but she said limited quantities have been sold in Canada, where it doesn't have to be labeled as "genetically modified."

"Approximately 350,000 tons of Atlantic salmon are consumed in the United States with more than 95% of it imported.  FDA’s actions will allow for production and sale to begin here in the U.S., bringing opportunity for investment in rural America, creating American jobs, while also reducing dependence on seafood imports," Wulf said in a statement.

In a statement to FOX Business, AquaBounty said if all goes well, it plans to have its first harvest by the Fall of 2020.