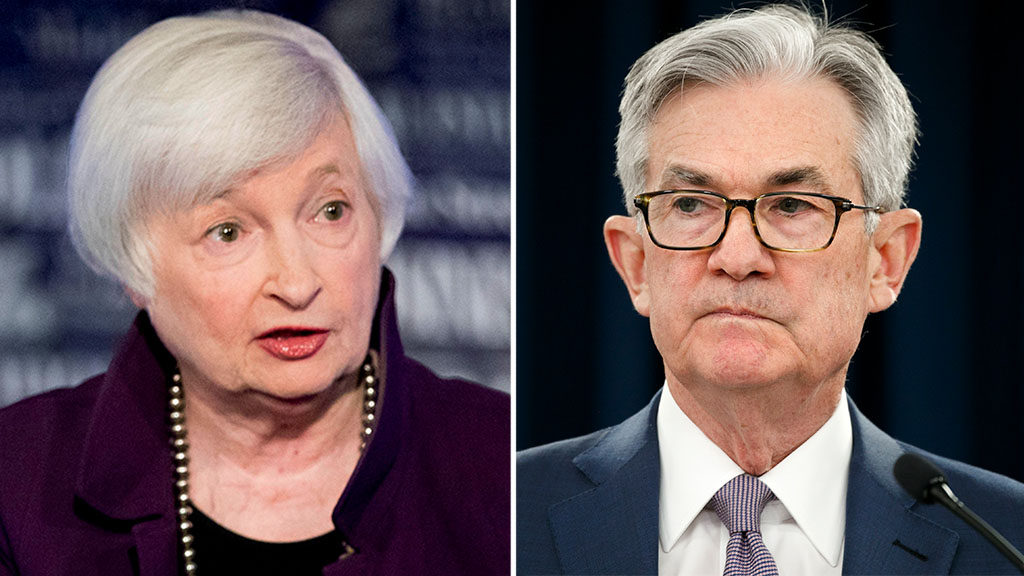 Hoover Institution senior fellow in economics John Taylor provides insight into how economic policy, the value of the U.S. dollar, regulations, taxes and U.S.-China relations will look while Janet Yellen is at the Treasury.

When Jerome Powell succeeded Janet Yellen as Federal Reserve chief three years ago, he hosted a farewell dinner party for her at his home in Chevy Chase, Md.

Back then, Ms. Yellen was passing the baton to Mr. Powell.

Three years later, in many ways, he is passing a baton back to her.

The Fed spent 2020 combating the economic fallout of the coronavirus pandemic with interest-rate cuts, bond purchases and emergency lending programs. As Fed officials prepare to meet this week, Mr. Powell sees their policies on hold because they have already committed to keeping rates at low levels.

YELLEN: OFFSHORING TAX PENALTY WOULD INCENTIVIZE US COMPANIES TO ‘CREATE AND MAINTAIN JOBS AT HOME’

Ms. Yellen, who is poised to become President Biden’s Treasury secretary this week, hopes to oversee a government spending wave aimed at making sure joblessness falls much lower and preventing further widening in inequality. Mr. Powell has handed the stimulus baton to her by pledging to keep rates very low until that happens.

The former Fed colleagues have a history of working well together. They formed a bond as top officials at the central bank from 2012-18, at one time in adjacent offices. Mr. Powell, who served as a senior Treasury official in the early 1990s, has consulted with Ms. Yellen on policy in her post-Fed life.

Now, their shared experience and economic views set the stage for the closest working relationship between their institutions since the 2008 financial crisis.

This matters for the economy because it is likely to take some of the burden off the Fed for spurring a faster economic recovery. And it helps explain why the central bank likely won’t be in any hurry to raise interest rates even if Congress approves more spending to boost growth.

Ms. Yellen will also be a key adviser to Mr. Biden on whether to offer Mr. Powell a second term as Fed leader. Mr. Powell, who was named to the Fed’s board by President Obama, doesn’t have a relationship with Mr. Biden and didn’t speak to him during the campaign last year or since the election.

Mr. Powell, who is entering the final year of his term as Fed chairman, faces a very different economic and political environment than he did when he succeeded Ms. Yellen at the Fed in 2018.

At that time, given the experiences of the 1970s and 1980s, economists, including Ms. Yellen, worried that very low unemployment would fuel higher inflation. As Fed chairwoman, she began to gradually raise interest rates in late 2015, and Mr. Powell continued the effort during his first year as Fed chairman.

President Trump repeatedly admonished Mr. Powell to stop raising rates and tried to install critics of Mr. Powell on the Fed’s board, though the Senate didn’t go along.

Higher inflation never materialized, and in early 2019, Mr. Powell signaled an end to rate rises. Falling unemployment spurred wage increases as companies competed for scarce workers but not the broader consumer-price increases once feared. The tighter labor market helped to lift the fortunes of low-skill workers and minorities.

Then came the coronavirus pandemic. Many economists agree that the Fed’s fast and aggressive response helped prevent the health crisis from becoming a financial panic, too.

The event led to unprecedented Fed coordination with the Treasury Department on emergency-lending programs but also came with friction between the two.

WHO IS JANET YELLEN, BIDEN'S PICK TO LEAD THE TREASURY?

The emergency-lending programs wound down at the end of 2020 after a dispute between Mr. Powell and Steven Mnuchin, Mr. Trump’s Treasury secretary. Mr. Mnuchin’s surprise decision after the November election to allow the programs to lapse drew a rare public objection from the Fed.

Mr. Mnuchin and Mr. Powell “did not see eye-to-eye on such coordination, from all outward appearances, but Yellen and Powell should be closer,” said Glenn Hubbard, a top economic adviser to President George W. Bush who worked with Mr. Powell at the Treasury in the early 1990s.

Fed officials could welcome the Treasury’s commitment to push for more fiscal stimulus because it eases pressure on the Fed to provide more monetary stimulus, which some critics say is contributing to inequality by pushing up asset prices while doing less for the broader economy.

Mr. Powell warned last year against relying too much on Fed policy to deliver the dividends of tighter labor markets. “It took [until] the eighth and ninth and 10th years of [the last decade’s] expansion to get those benefits,” he said in July. “That’s not a good strategy—waiting eight, nine, 10 years to get there.”

One risk, some economists warn, is that the combined firepower of the two institutions might overdo stimulus to the economy, triggering some financial bubble or the inflation that few are projecting. Until they see clear evidence of excess, though, Mr. Powell and Ms. Yellen aren’t overly concerned about overdoing it.

Their immediate priority is spurring economic recovery from the effects of the coronavirus pandemic. But both leaders worry about a deeper risk they want to avoid: The trap of slow-growth, low-inflation and low interest rates that has plagued Japan for 25 years and Europe for the past decade.

The desire to avoid Japan’s situation was one reason why the Fed last August abandoned its longstanding strategy of pre-emptively raising interest rates when unemployment falls to prevent inflation from taking off. Instead, the Fed expects to leave interest rates very low for years as the labor market heals.

Ms. Yellen endorsed the August change while warning against relying too heavily on Fed policy to pull the economy out of a ditch. “They’ve done almost all they can do,” she said in November.

Their shared economic views could lead Mr. Powell and Ms. Yellen to reconsider the past practice in which the institutions avoided actively coordinating their policies.

Ms. Yellen will respect the Fed’s independence, but “the world is changing,” said Nathan Sheets, a former senior Treasury official in the Obama administration who spent much of his career at the Fed before that. “We haven’t fully figured out the nature of the potential complementarities, but it’s fair to say a Yellen-led Treasury is well placed to work with the Federal Reserve in thinking through the most constructive ways what that might look like.”

Low interest rates make a big difference in the sustainability of elevated government borrowing. Coordination between the Fed and Treasury is a delicate subject because it raises questions both about the central bank’s autonomy to set short-term rates and who ultimately controls fiscal policy, said Roberto Perli, a former Fed economist.

Critics of Fed bond buying have in the past worried that large central-bank purchases of government debt can cause it to leave monetary policy too loose for too long to avoid higher federal debt-service costs when rates rise. Ms. Yellen played down those concerns in an interview last year and said the Fed wouldn’t let that happen.

The Fed is currently increasing its holdings of long-term Treasury securities, which helps keep their yields low. But Fed officials say the purpose of that program is to meet its own goals of 2% inflation in the long-run and low unemployment, not to help keep the Treasury’s interest burden low.

During the Obama years, the Fed and the Treasury sometimes worked at cross-purposes. Back then, too, the Fed was buying large quantities of long-term Treasury debt to hold down long-term rates. Officials hoped that would help spur borrowing, spending and investment by the private sector to speed up the recovery.

The Treasury then ramped up its issuance of long-term debt, increasing the supply of bonds in the market. That locked in low rates of borrowing for the public purse but put upward pressure on long-term rates, undercutting the Fed’s effort to hold them down.

Such steps were incoherent, said Lawrence Summers, who worked in the Obama White House and was Treasury Secretary under President Bill Clinton. He sees less risk of a repeat with Mr. Powell and Ms. Yellen coordinating their efforts.

An early fight over the prospect of increased Fed-Treasury harmonization in the Biden administration boiled over at the end of last year. The outcome of that fight sharply reduced the prospects for Ms. Yellen to expand Fed lending programs in ways some Democrats wanted.

In November, Sen. Pat Toomey (R., Pa.) persuaded Mr. Mnuchin to wind down five emergency Fed lending programs that had backstopped borrowing by businesses, cities and states. Mr. Toomey made sure the pandemic-aid bill enacted in December prevented the Treasury Department from restarting those programs.

He said he was concerned the programs would be misused by the Biden administration after they achieved their initial goal of rehabilitating dysfunctional markets. “The Democrats came along and decided, let’s morph this into some other purpose, like a general fix-all for the economy,” Mr. Toomey said.