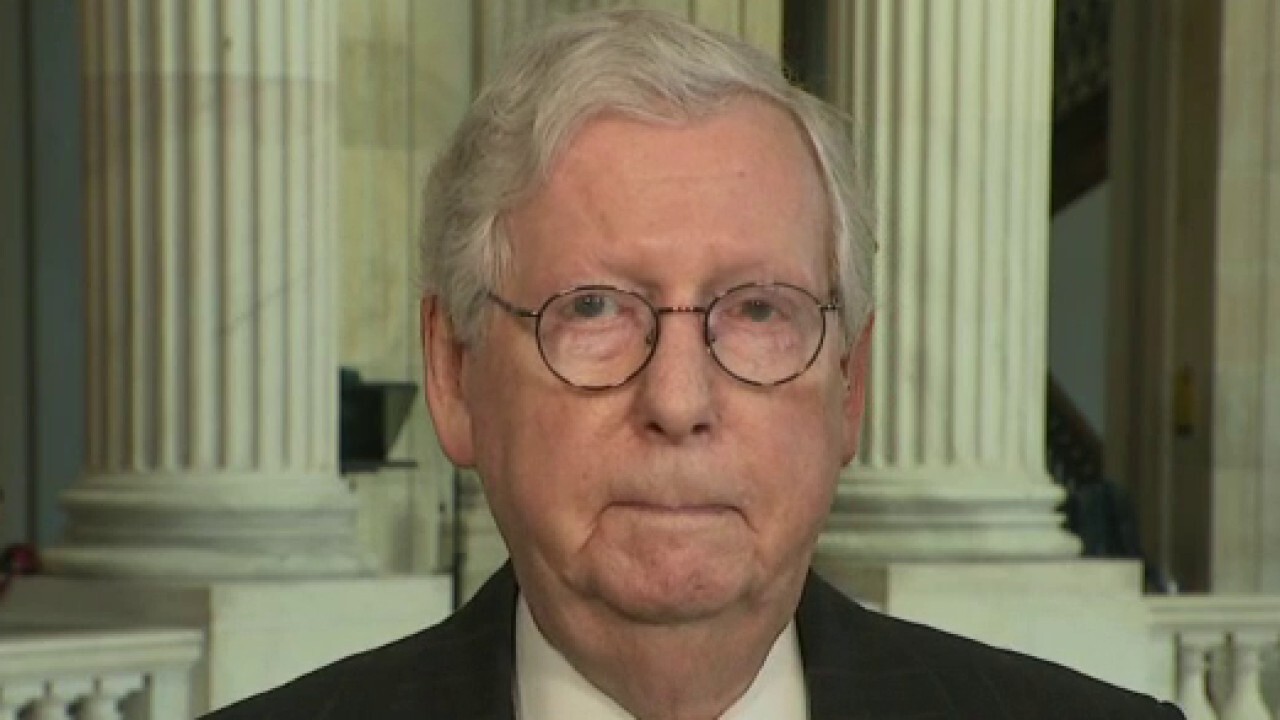 If Democrats are willing to settle on infrastructure bill, we’ll work with them: McConnell

Progressive Democrats are calling on President Biden to abandon the infrastructure talks with Republicans, amping up pressure on the White House to go it alone on a sweeping, multitrillion-dollar tax and spending package.

Negotiations began in April and are expected to drag into early June, when Congress returns from recess, as the two sides remain fiercely divided on the next economic spending package – and how to pay for it.

Biden laid out the $2.3 trillion American Jobs Plan last month, which would rebuild roads and bridges, expand broadband service, invest billions into green energy and fighting climate change and create programs to help bolster care for elderly and disabled Americans. The measure would be funded by raising taxes on big corporations.

But Republicans oppose the size and scope of Biden's proposal, which they say is too expensive and strays too far from "traditional" infrastructure, and have resisted any effort to roll back part of the 2017 Tax Cuts and Jobs Act. To pay for the plans, Biden has proposed raising the corporate tax rate to 28% from 21% and imposing a higher global minimum on U.S. companies' foreign earnings.

The White House offered to lower its offer to $1.7 trillion, and a group of GOP lawmakers countered last week with a $928 billion proposal that includes just $257 billion in new funding. (The remainder is part of an existing baseline plan for investments.)

But despite the weeks of negotiations, there remains an ideological gulf between the two sides over what constitutes infrastructure. The GOP's plan notably does not include new spending on a wide range of areas where Biden has recommended billions, such as electric vehicles, elder care and veterans hospitals, frustrating some Democrats who want Biden to walk away from the talks.

"Mitch McConnell has already said that 100% of his focus is on blocking the Biden agenda," Rep. Pramila Jaypal, D-Wash., tweeted. "So why are we negotiating with Republicans for a smaller infrastructure plan? Now is the time to GO BIG."

With narrow majorities in the House and Senate, Democrats have the option to bypass Republicans and approve the measure on a party-line basis using a procedural tool known as budget reconciliation – a path that some liberals want to take.

"The Republican party has already shown a pattern of the fact that their vote can’t even be counted on," Rep. Alexandria Ocasio-Cortez, D-N.Y., said during a town hall last week, suggesting that Democrats may end up whittling down a package that Republicans still won't support.

That sentiment was echoed by Sen. Bernie Sanders, I-Vt., who warned that Americans "want action."

"The American people want action, not never-ending ‘negotiations’ and obstructionism, and they will not come out and vote for a party that does not deliver," Sanders tweeted. "If not now, when?"

There are growing signs the Biden administration is opening to acting unilaterally to pass the American Jobs Plan: On Sunday, Transportation Secretary Pete Buttigieg said negotiations will continue in private this week, but he identified June 7 as an endpoint for possible deal-making.