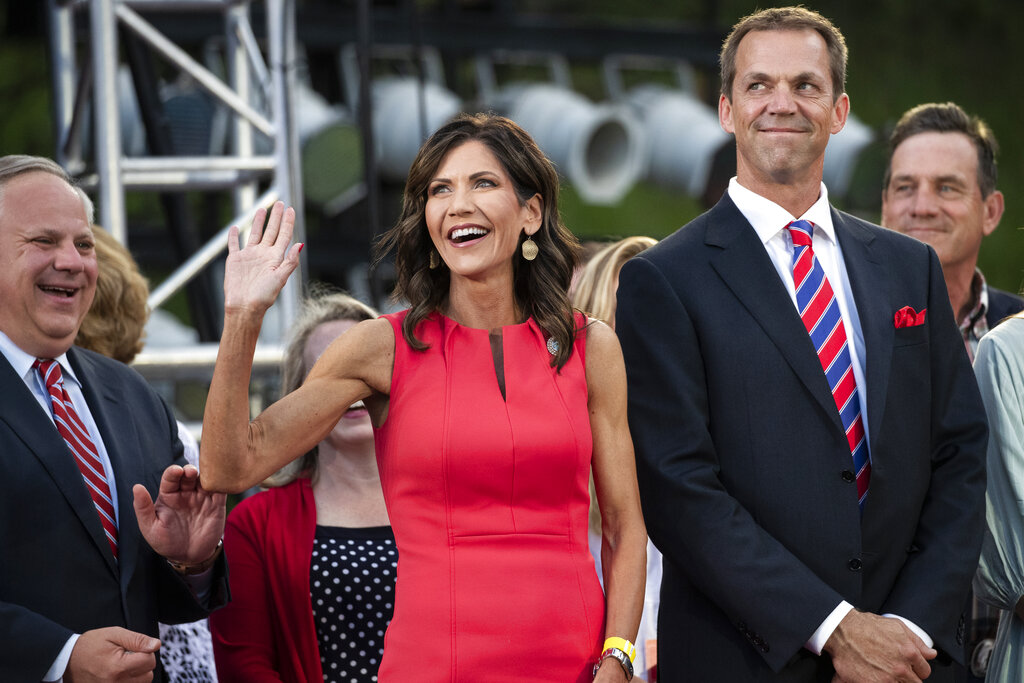 Five of the six states with the nation’s lowest unemployment rates are in the Midwest, have Republican governors and have almost no restrictions intended to slow the spread of the coronavirus.

The governors say their decisions not to impose harsher restrictions are paying off with fewer business closures and more hiring reflected in the strong jobless numbers. But economists say it’s not so simple. Although businesses that are struggling during the pandemic can benefit when governors opt not to require masks or limit in-door gatherings, other factors may play an even bigger role in producing such low unemployment rates.

STOCKS JUMP IN BROAD RALLY, CLOROX AND DUNKIN IN FOCUS

And those same rules that could initially help the states’ economies also are blamed for their leading the nation in coronavirus infection rates, raising questions about whether their hands-off approach is sustainable. North Dakota and South Dakota have the most cases per capita in the U.S., and Nebraska and Iowa aren’t far behind.

“If hospitalization and death rates increase, then you have a motivation by politicians to close the economy down. That would be very deadly and push unemployment rates back up,” said Ernie Goss, an economist at Creighton University in Omaha.

For now, though, those Midwestern states have a lock atop the unemployment rankings, far below the national average rate for September of 7.9%. Nebraska leads the nation with a 3.5% unemployment rate, followed by South Dakota, Vermont, North Dakota, Iowa and Missouri.

Most of the Midwestern governors imposed some restrictions last spring, but they were among the first to ease them, arguing that they needed to balance efforts to slow the virus’ spread with the need for a robust economy.

“I’ve got to believe that if you shut down harder, you’re going to see a more severe impact to your industries and the longer you’re shut down, the harder it’s going to be for those industries to rebound,” Nebraska Gov. Pete Ricketts told The Associated Press.

Missouri Gov. Mike Parson, who tested positive for COVID-19 in September, has touted a balanced approach to coping with the pandemic. And Iowa Gov. Kim Reynolds urged residents not to let the virus dominate their lives.

In South Dakota, Gov. Kristi Noem said: “There’s consequences to what we’ve seen happen in other states — that shutting down businesses, stopping people’s way of life has some devastating impacts. We’re taking a very balanced approach.”

In contrast, Vermont Gov. Phil Scott, a Republican, has worked aggressively to tamp down the virus, including closing some businesses in the spring and imposing a mask mandate. Vermont now has one of the nation’s lowest COVID-19 infection rates along with the third-lowest unemployment rate.

Like the Midwestern states, Vermont is largely rural with industries that weren’t hurt as badly by the pandemic.

Economists say that’s not a coincidence, noting that states dominated by agriculture and some kinds of manufacturing were able to operate closer to normal and managed to bounce back more quickly. That contrasts with states that rely on tourism, such as California, Nevada and Hawaii, which have the nation’s highest unemployment rates.

“The economy of a rural state has a different structure, so more of the people work in industries that wouldn’t really be disrupted by a need for social distancing like agriculture,” said Eric Thompson, who leads the Bureau of Business Research at the University of Nebraska-Lincoln.

The Midwestern states already had ultra-low unemployment rates before the pandemic, and they benefitted early on from a lack of population density, with plenty of wide-open spaces and few major cities where it would be harder to avoid catching the virus. More recently, though, many of those rural areas have seen some of the nation’s highest virus rates.

Even in industries like meatpacking that initially were devastated by workers catching COVID-19, the companies have managed to make changes that have allowed their operations to nearly return to normal.

Thompson said a lack of restrictions may have been most important in the spring. At the height of the shutdowns in April, Nebraska’s unemployment rate peaked at 8.7%, which was slightly more than half the national rate of 14.7% at that time.

Nathan Kauffman, Omaha branch executive of the Federal Reserve Bank of Kansas City, said fewer businesses closed in these states because many of them are in what are considered essential industries.

Ricketts agreed that Nebraska’s mix of industries played a significant role in helping the state’s economy.

“The kinds of things that we’re strong in are agriculture, manufacturing, finance and technology. You’ve just got industries that are not going to be as impacted by a pandemic,” Ricketts said.

But even if business has remained better in these states, that doesn’t mean they have been completely spared. Restaurants, hotels and other types of businesses are still struggling because people remain wary of resuming their normal shopping patterns, and those economic costs could rise amid spikes in virus rates.

Despite the low unemployment figures, all of the states now have fewer jobs than before the pandemic hit. Nationally, the economy has regained only about half of the 22 million jobs that were lost.

In Rapid City, S.D., Black Hills Bagels never had to close because the wholesale side of its operation continued providing products to grocery stores, and its retail store turned to drive-thru and delivery options, owner Debra Jensen said. It even had trouble hiring the workers it needed this year because unemployment remained so low.

“I’m just happy that the state and the folks in South Dakota made the right decisions to make sure our economy didn’t just bottom out,” Jensen said.

Arik Spencer, president and CEO of the North Dakota Chamber of Commerce, said he doesn’t think shutting down the economy is the right approach, but every state is trying to help the economy while managing the virus.

“We hope that with the thoughtful approach of decisionmakers here in North Dakota, we’re poised to recover quickly. But if there was a silver bullet for recovery, every state in the country would be utilizing that right now,” Spencer said.