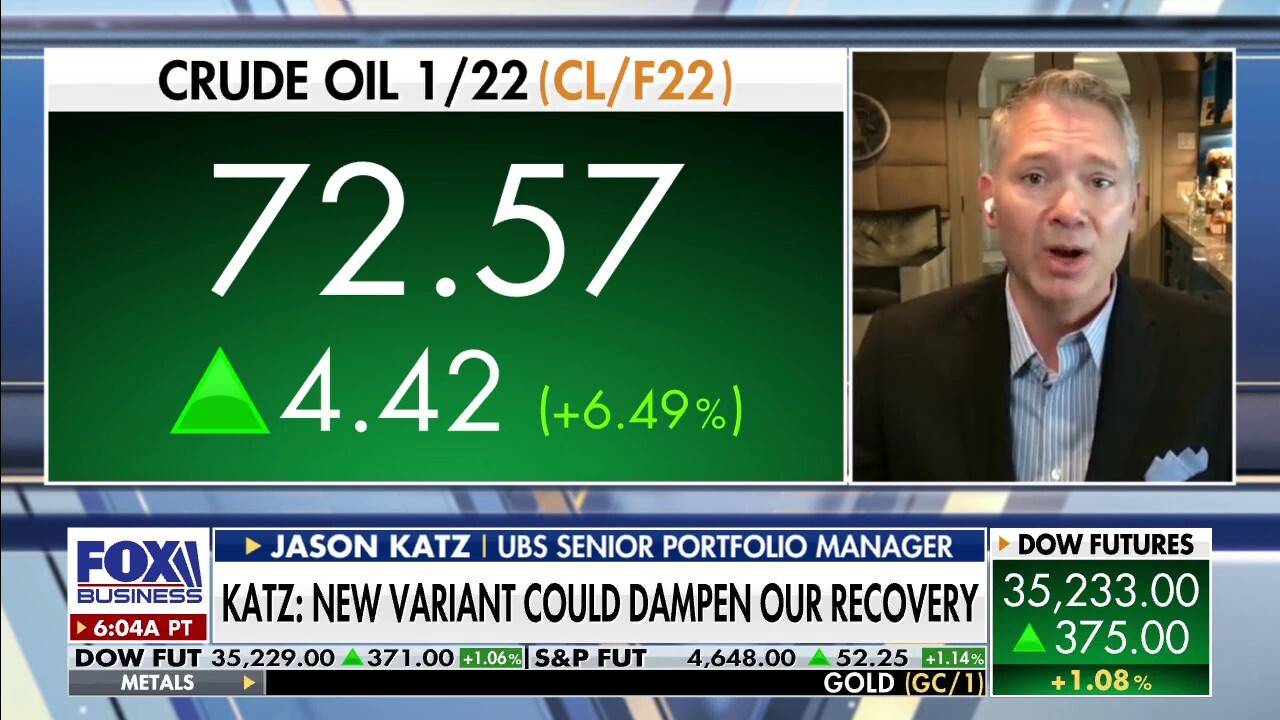 UBS managing director and senior portfolio manager Jason Katz weighs in on the impact the omicron variant will have on the economy amid inflation and supply chain issues.

Federal Reserve Chairman Jerome Powell assured lawmakers on Wednesday that a move by the U.S. central bank to speed up its withdrawal of support for the U.S. economy should not disrupt the markets, one day after his comments precipitated a massive nosedive on Wall Street.

Powell told the Senate Banking Committee Tuesday that the Fed may accelerate its plan to reduce its monthly purchases of bonds and mortgage-backed securities, triggering a 650-point drop in the Dow. The market rebounded on Wednesday.

"At this point, the economy is very strong, and inflationary pressures are high," Powell said on Tuesday. "It is therefore appropriate in my view to consider wrapping up the taper of our asset purchases, which we actually announced at our November meeting, perhaps a few months sooner."

That could mean the Fed's bond-buying program ends sooner than expected, potentially leading to a faster-than-expected interest rate hike. The central bank has been purchasing $120 billion in bonds each month throughout most of the pandemic in order to keep credit cheap and stabilize the financial markets. In November, Fed officials announced plans to scale back the program by $15 billion a month, a timeline that would end the program by late June.

Powell doubled down on his comments on Wednesday while testifying before the House Financial Services Committee, telling lawmakers that it's "appropriate" for the Fed to consider accelerating the pace of tapering at its December meeting as consumers deal with a burst of inflation.

"The taper need not be a disruptive event in markets, I don’t expect that it will be," Powell said. "It hasn’t been so far. We telegraphed it."

Goldman Sachs economists expect the Fed to double the pace of tapering its bond purchases to $30 billion beginning in January, putting the central bank on track to wind down the program by mid-March.

"The increased openness to accelerating the taper pace likely reflects both somewhat higher-than-expected inflation over the last two months and greater comfort among Fed officials that a faster pace would not shock financial markets," analysts wrote in a client note last week.

Minutes released last week from the U.S. central bank's Nov. 2-3 meeting show that some policymakers are worried that inflation pressures are worsening and hinted they are prepared to hike rates from near zero if prices keep rising. While officials stressed a "patient" approach about incoming economic data, they also said they should "not hesitate to take appropriate actions to address inflation pressures that posed risks to its longer-run price stability and employment objectives."

"Various participants noted that the Committee should be prepared to adjust the pace of asset purchases and raise the target range for the federal funds rate sooner than participants currently anticipated if inflation continued to run higher than levels consistent with the Committee’s objectives," the minutes said.

Powell has maintained that policymakers will conclude the tapering process, which is on track to wrap up in June at the current pace, before raising interest rates from near zero.