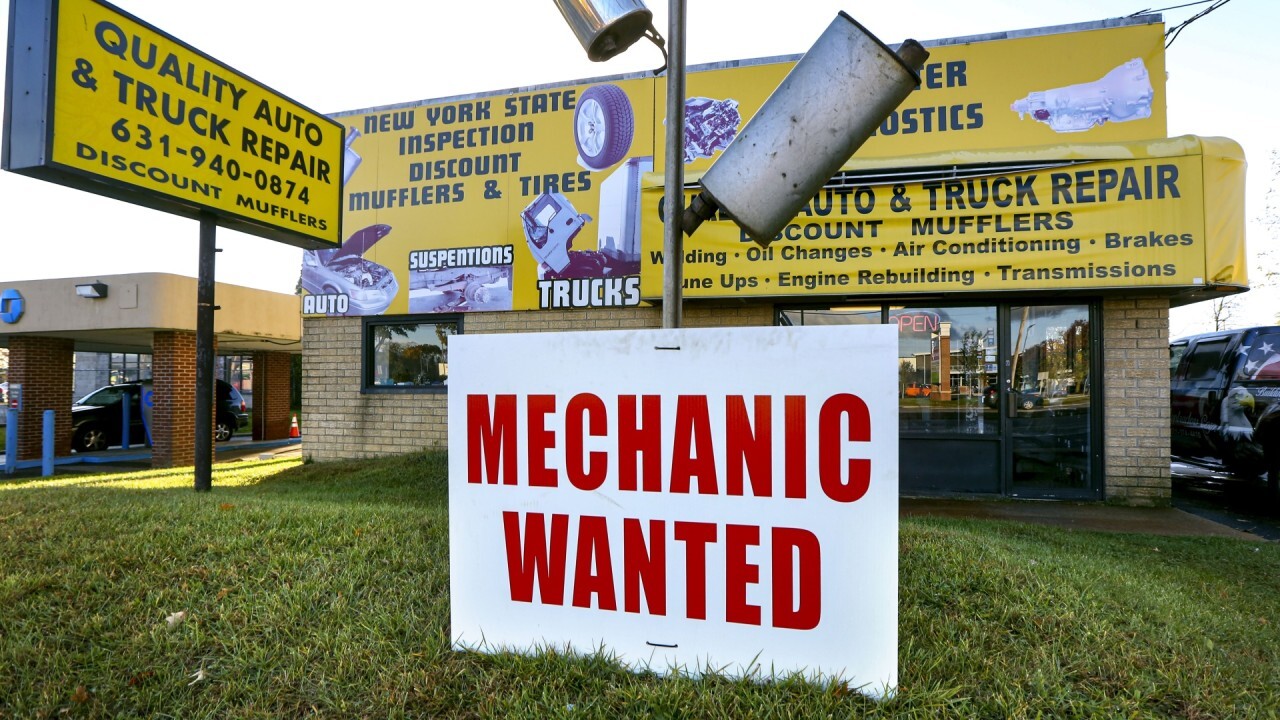 ‘How America Works’ narrator Mike Rowe says blue-collar industries are struggling with how to make a more persuasive case on available opportunities.

The December jobs report is projected to show that hiring bounced back last month before the rapid spread of the new omicron coronavirus variant cast a fresh threat over the economy and its recovery from the pandemic.

Payrolls likely increased by 400,000 last month while the unemployment rate likely ticked down to 4.1%, according to a median estimate by Refinitiv economists. That would mark a major improvement from November, when the economy added just 210,000 new positions – less than half of what was forecast.

A RECORD 4.5M AMERICANS QUIT THEIR JOBS IN NOVEMBER

The report will include data only from the first half of the month, before a stunning rise in cases driven by the highly transmissible omicron variant. The U.S. is now reporting a seven-day moving average of more than 540,000 cases.

While it's still unclear what the fast-spreading variant will ultimately mean for the health of the economy, its effects on daily life have already been felt: Thousands of flights have been canceled, Broadway shows are shuttering their doors and a growing number of schools have postponed their reopenings.

A hiring sign is placed at a booth for Jameson's Irish Pub during a job fair in the West Hollywood section of Los Angeles, Sept. 22, 2021. (Associated Press / AP Newsroom)

Many economists expect omicron to have minimal effect on the December jobs report, and to instead impact hiring in January.

"The December jobs report won't yet show the extent of the labor market disruption currently being wrought by omicron. But the January report is sure to do so," said Julia Pollack, chief economist at ZipRecruiter. She projected that industries most vulnerable to the pandemic – like leisure and hospitality, travel, retail and arts and entertainment – would take the biggest hits.

Other economic indicators have been upbeat so far, despite the omicron surge: For instance, the ADP National Employment report released Wednesday showed private employers hired a staggering 807,000 workers last month, blowing past the 400,000-job gain expected by Wall Street.

In all, U.S. companies saw an average monthly job gain of 625,000 in the final three months of the year, surpassing the 514,000 average for the year. Job gains in 2021 eclipsed 6 million, but private-sector payrolls remain nearly 4 million jobs short of pre-pandemic levels

The projected gain of 400,000 jobs could solidify the possibility of the Federal Reserve raising interest rates as soon as March; now that the labor market is closer to reaching maximum employment, the Fed may turn its attention to the second part of its dual mandate – stabilizing prices.

Minutes from the U.S. central bank's Dec. 14-15 meeting show that many policymakers believe they will reach their employment goal soon if economic conditions continue to improve, opening the door to the Fed's first interest rate hike in three years. The Fed slashed rates to near zero in March 2020 as the nation confronted an unprecedented pandemic that froze economic activity and plunged the country into its steepest recession in almost a century.

"Participants generally noted that, given their individual outlooks for the economy, the labor market and inflation, it may become warranted to increase the federal funds rate sooner or at a faster pace than participants had earlier anticipated," the minutes, released Wednesday, said. "Some participants also noted that it could be appropriate to begin to reduce the size of the Federal Reserve’s balance sheet relatively soon after beginning to raise the federal funds rate."

Although officials held rates near zero during the meeting, they were unanimous in forecasting at least one rate hike next year. That marked a considerable shift from September, when half of the central bankers believed interest rate increases were not warranted until at least 2023.