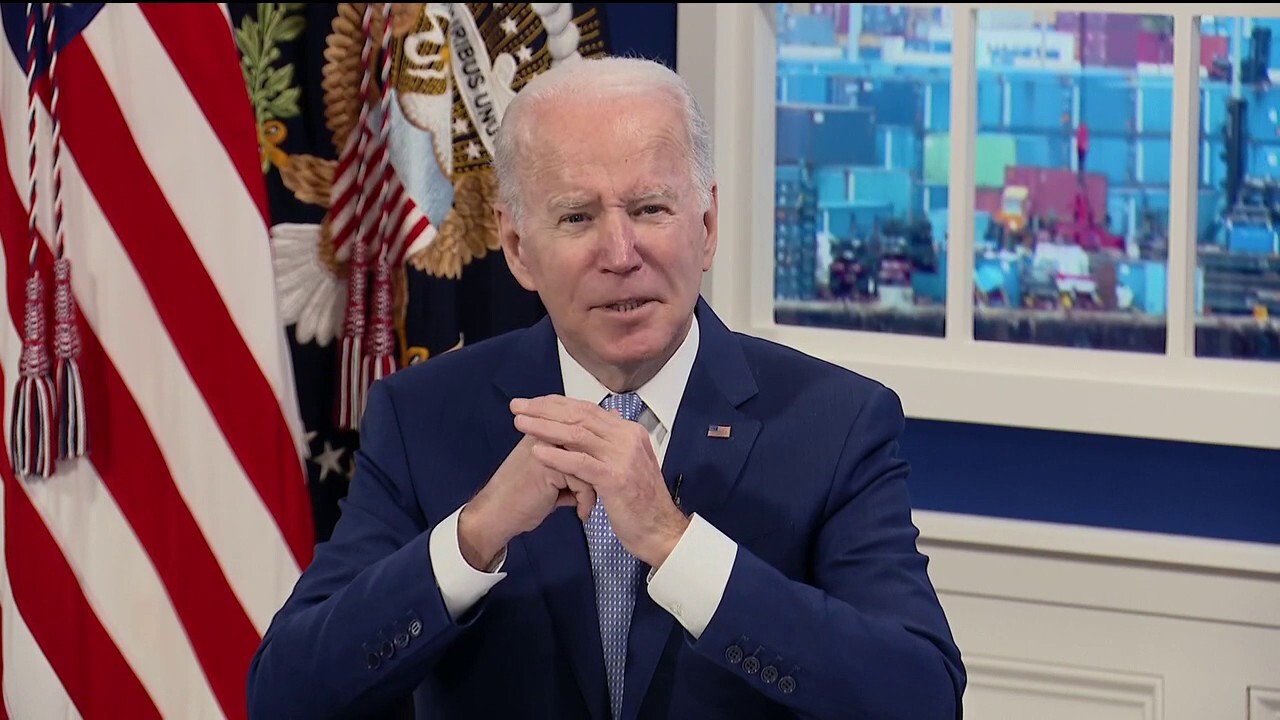 Biden on supply chain: 'The much predicted crisis didn't occur'

President Biden discussed supply chain shortages and how the White House has been tackling the issue.

President Biden on Wednesday touted the steps his administration took to eliminate supply-chain bottlenecks ahead of the holiday season, saying the different actions taken helped to avert a Christmastime crisis.

Biden made the comments during a meeting with his Supply Chain Disruptions Task Force, a group of corporate CEOs and administration officials that was established in June to address the issue. The White House says the task force has made "significant progress to alleviate bottlenecks that are rooted in the global pandemic."

"The much-predicted crisis didn't occur," Biden said. "Packages are moving, gifts are being delivered, shelves are not empty." Despite the disruptions in the supply chain, Biden said that shelves at grocery and drug stores are stocked at 90% of their full capacity – compared with 91% before the pandemic shutdown a broad swath of the nation's economy.

Biden pointed to the administration's plan to clear up backlogs at some of the nation's biggest ports, including establishing around-the-clock operations at the Port of Los Angeles and the Port of Long Beach. The president has also spoken with the CEOs of Wal-Mart, Target, UPS and FedEx about how to relieve supply-chain challenges as ships wait to dock at some of the biggest ports.

Smith, the FedEx chief executive, said supply-chain issues are "not all solved" but assured Biden that "most of Santa Claus' products will be delivered to the consumers."

The supply-chain problems stem largely from the pandemic: Americans, flush with cash from stimulus checks and a booming stock market, spent freely on everything from electronics to furniture to new clothing. But the surge in consumer demand caught many suppliers – who expected demand to plunge as the economy sank into the worst recession in nearly a century – off guard, bringing a goods shortages to the U.S. and much of the world.

Soaring demand, coupled with congestion at ports and warehouses, has brought about the highest inflation in four decades, further confounding the White House. Biden has taken efforts to quell inflation by tackling supply chain problems, including addressing port congestion and expanding trucker hours.

In an attempt to reduce prices at the pump, Biden ordered a record-setting 50 million barrels of oil released from the nation's Strategic Petroleum Reserve, a decision made in coordination with other major energy-consuming countries including India, the United Kingdom and China.

The president has also called on the Federal Trade Commission to probe whether oil and gas companies are engaging in criminal conduct by profiting from artificially high prices at the pump, even as wholesale fuel costs decline.

The White House on Wednesday noted that fuel prices have fallen 12 cents a gallon on average to $3.30, but said that Biden "believes that they are too high, especially given that we are emerging from a once-in-a-century pandemic."