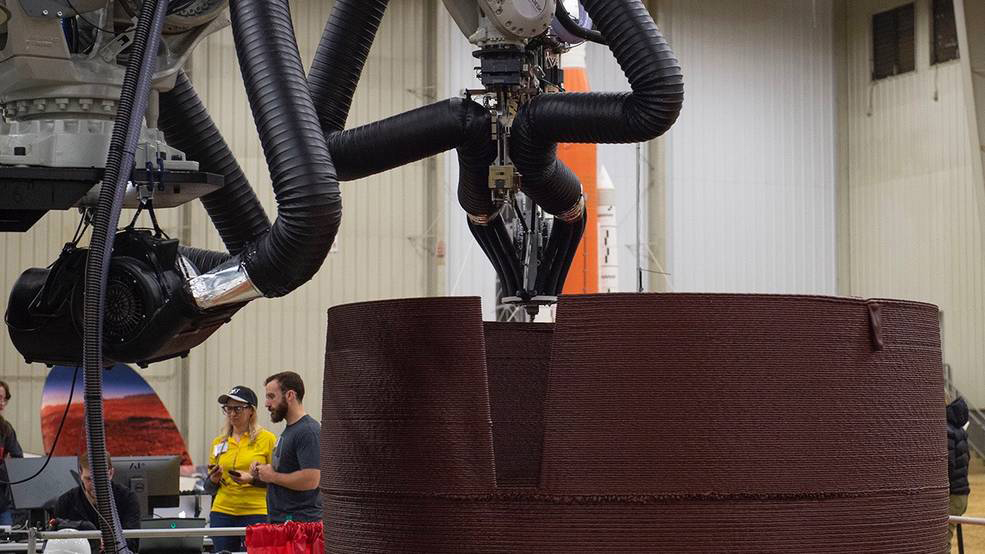 NASA has announced partnerships with 17 U.S. companies to advance a range of commercial space technologies.

“The NASA and industry teams will design a 3D printing system for NASA’s Artemis lunar exploration program, test a simple method for removing dust from planetary solar arrays, mature a first-stage rocket recovery system for a small satellite launch provider, and more,” explained the space agency, in a statement.

Secaucus, N.J.-based AI SpaceFactory will work on a material that mimics lunar regolith, or dirt. “Working with NASA’s Kennedy Space Center in Florida, the company will 3D print a test structure in a vacuum chamber that mimics environmental conditions on the moon,” the space agency explained. “The research could inform a 3D printing system for constructing large surface structures from in-situ materials on other worlds."

Secaucus, N.J.-based AI SpaceFactory autonomously printed a habitat and tested technology for building structures on the Moon and Mars. (Credits: NASA/Emmett Given)

SpaceX, led by Elon Musk, will work with NASA’s Langley Research Center to capture imagery and thermal measurements of the company’s Starship vehicle during orbital reentry over the Pacific Ocean.

“With the data, the company plans to advance a reusable thermal protection system, which protects the vehicle from aerodynamic heating, for missions returning from low-Earth orbit, the moon and Mars,” NASA said in the statement.

Last month, NASA announced that it has reached a key milestone with the U.S. companies competing to provide landers for future crewed missions to the moon.

The space agency’s Artemis program aims to land American astronauts on the moon by 2024. Working with commercial and international partners, it also plans to establish a sustainable human presence on Earth’s natural satellite by 2028.

A key element of the Artemis program is also landing the first woman on the moon.

NASA recently tested the booster rocket technology that will be used to power Artemis moon missions. The space agency conducted a full-scale booster test for its Space Launch System (SLS) rocket in Promontory, Utah, in September.

The test is an important milestone for the Artemis program.

Last year, NASA revealed details of its vision for the Artemis Moon Lander that will return American astronauts to the lunar surface.

Some lawmakers, however, have urged NASA to delay putting U.S. boots on the moon until 2028.