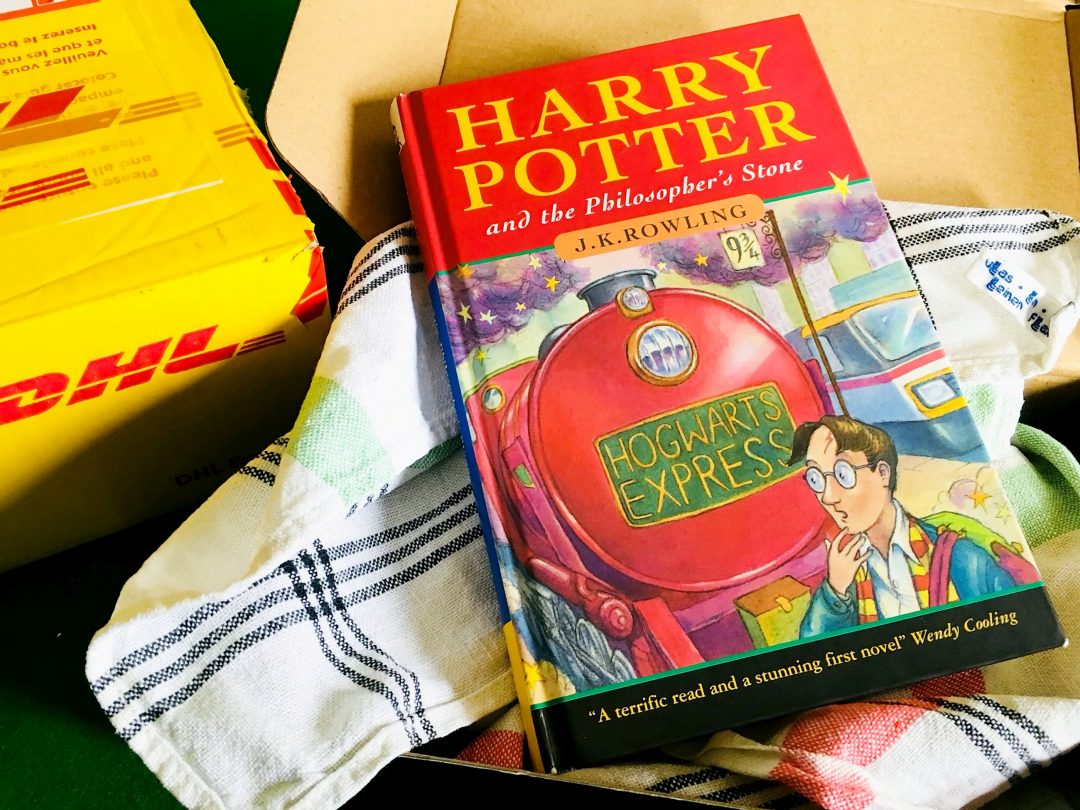 A rare first-edition of a "Harry Potter" book deemed to be a "holy grail" could be worth as much as $65,000 when it goes up for auction next month.

The copy of "Harry Potter and the Philosopher’s Stone" was originally purchased more than 20 years ago by an anonymous seller to teach his children to English, British news agency SWNS reports. Since then, it had been sitting on a shelf and the seller decided to get it valued, leaving him stunned when he learned what it could be worth.

“I bought the book for my children around 18 months after it was first published," the anonymous seller said. “If I remember correctly, I bought it by mail order from Barnes & Noble so I am guessing they had it in their warehouse for a while."

A dad was stunned to discover a book he brought to help his children learn English more than 20 years ago was a seriously scarce hardback Harry Potter first edition worth thousands of dollars. (Credit: SWNS)

Since it was first published, the "Harry Potter" series became the best-selling book series of all time, selling more than 500 million copies around the world as of 2018, according to Wizarding World. It has also spawned one of the most successful movie franchises of all-time, generating more than $7.7 billion in box-office revenue over eight movies for Warner Media, now a subsidiary of AT&T.

The retired British ex-pat said he used the book to help teach his children English while going to school in Luxembourg and decided to use the Harry Potter book after reading a positive review of it.

“I was prompted to buy it after reading a positive review in the Weekend Financial Times," the seller added. “I needed English books to read to my three children at bedtime as I was on a mission to teach them my native language from an early age. “It’s just been sitting on a shelf ever since with the rest of the Harry Potter books, with no special care."

The seller brought the book to Hansons Auctioneers, which will handle the sale, for identification and was stunned to learn how valuable his item was.

“I did not think mine would be valuable as it was certainly not purchased when first published," the seller explained. “I was very surprised and shocked to see that it did in fact tick all the boxes, but still could not quite believe it until I checked with Hansons."

“True first issues are seriously scarce," Hansons' books expert Jim Spencer said. “Only 500 were printed, 300 of which were sent to schools and libraries. This is extra rare because it's one of the remaining 200 and yet this is my fourth one in just over a year. It's a cliched phrase, but they really are the holy grail for collectors."

There are several ways to identify the book as a first issue, including the duplicated '1 wand' phrase on page 53.

Other signs include the word “philosopher” being spelled incorrectly on the back cover, and author J.K. Rowling having her name appear as Joanne Rowling on the inside page. The issue number also reads 10 9 8 7 6 5 4 3 2 1.

“I've handled quite a few of those - one sold for £6,500 ($8,335) in our last library sale," Spencer explained. “I still receive countless calls and emails every day from people who think they may have the first edition, mostly nothing of note, but I stay hungry and keep searching.

With the proceeds, the seller said he would pay off his daughter's student loan.

“I have decided to sell now as I would like to pay off my daughter's student loan for her, which will give her a good credit history and help her to apply for a mortgage.”