Cynthia Cleveland didn’t start off as a cannabis entrepreneur. But as the industry pushed past a striking $11 billion in consumer spending last year, she saw an opportunity to get in.

Now, she wants to make her cannabis the next Grey Goose.

“You want the same flavor. You want to know what you're going to get,” she told FOX Business. “Right now, the industry is fragmented with cannabis not nationally legal.” But when it is legalized on a large scale, she said, “we want our product to be the same in Colorado or California or New York, created in the same way with all the same control.

“We want it to be like the next Grey Goose.”

Before she became president of Vertical Brands in May — a huge legal marijuana manufacturer and distributor in the United States — Cleveland held a few roles that helped prepare her: “I've been in consumer products pretty much my whole life,” she said, “everything from food at Carnation and Nestle, to gifts and toys at Imaginarium.”

She worked at Universal Studios, too.

Vertial’s Santa Rita Hills Outdoor Grow will be one of the largest in the world in 2019. (Courtesy of Vertical Brands.)

Vertical sells more than 35 brands of THC-based products and has more than 50 brands of CBD-based products currently in development. It’s headquartered in Agoura, California, and has operations in Arizona, Kentucky and recently in Ohio. The California location alone includes a 29-acre campus with nearly 80,000 square feet divvied up between buildings.

The mega-brand grows its own cannabis, makes its own products and distributes to dispensaries. “We've got a variety of different brands, from edible to tinctures,” Cleveland said, “every form factor you could imagine. We’re completely a seed-to-sale operation.” 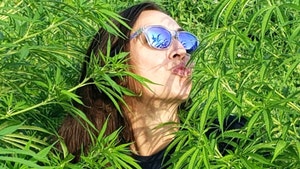 Women in weed: How female entrepreneurs are investing in a billion-dollar industry

“At the end of the day, I want to use my experience to help people," cannabis entrepreneur Jessie Johnson told Fox Business.

She got into cannabis to help people: “It’s more than just a recreational kind of thing. A lot of consumers are looking for something to help them or to help someone they love,” she said. “People are always looking for better solutions, pain relief and anxiety reduction.”

And she thinks there’s a growing market for women: “There’s a perception that users of cannabis products are just young men, but the reality is there's openness from women who are looking at products as wellness solutions. Some of the women who head larger companies started as caregivers and came up with formulations to help their patients.”

To date, Vertical has been very successful. It closed a $58 million Series A funding round in April to help it expand its footprint and is expecting to hit a whopping $100 million in revenue this year. Cleveland also wants to lean more heavily into the digital arena.

The newly appointed president is part of a growing number of women breaking into cannabis. Jessie Johnson is another. The health care-expert-turned-farmer turned 200 acres of land in Pennsylvania into a booming $3.5 million legal pot farming business.

But the pioneering isn’t without challenges. For starters, going digital won’t happen in a few clicks. While Vertical actively builds communities online to educate consumers, tech giants like Apple and Google have blocked the sale of cannabis distributing apps on their platforms.

Another hurdle is navigating the legal system. It’s sort of like prohibition, Cleveland said. Back then, “they had to live with a variety of complicated growth and regulations on a state-to-state basis and face challenges on how the products get distributed. And that's not all that different from the world that we're living with, with cannabis right now.”

Stuart Titus, Ph.D., is the chief executive officer of Medical Marijuana Inc. He told FOX Business until the passing of the Agriculture Improvement Act of 2018, which set new standards for agriculture, nutrition, conservation and forestry policy, many CBD companies struggled to find ways to cultivate, and many still do.

“The challenge remains setting up the proper guidelines to achieve legislation that everyone will be happy with and that will enable a regulated industry to develop and start to dismantle the black market for cannabis.”

It's a common story that has led to congressional hearings to remove cannabis from the Schedule I classification on the Controlled Substances Act, a law that classifies marijuana among other substances like heroin and cocaine as not having any accepted medical use.

Still, the money behind cannabis keeps growing, and Cleveland is it for the long haul.

When Colorado legalized marijuana in 2014, tax revenue surged by $500 million. In 2018, national sales for cannabis beat spending on Fortnite and Goldfish crackers combined. Medical Marijuana Inc. reports hemp-based products could bring in $2 billion in 2022, CBD oil could reach $20 billion by 2024 and recreational sales could hit $12 billion in 2025.

Other projections are way higher.

Marijuana has been legalized in 33 states for medicinal use and in 10 states and Washington, D.C. for recreational use. A 2018 Pew Research Center poll found a 62 percent of Americans supported legalizing the plant in some form. And while states can enact their own laws governing CBD oil, it’s legal under federal law.

Democratic presidential hopefuls Sens. Bernie Sanders, I-Vt. and Elizabeth Warren, D-Mass. are among U.S. Congress members pushing for expanded cannabis rights. President Trump’s stances are a bit less clear but he alluded this year that he would “probably” support the STATES Act to give protections to state marijuana industries.

Matt Karnes, founder of cannabis analysis company GreenWave Advisors, told AG Web that “the pressure will ratchet up and the feds will have to respond to the will of the people, and marijuana will someday trade like any other commodity in the United States.

Vertical is preparing for that possibility. Along with a wave of products cobranded by celebrities like rapper The Game, it’s rapidly expanding its operations across the country.

It also plans to go public.

“We have so many brands coming out in the next year,” Cleveland said “I mean, we're going to have more brands than maybe I've created in almost the lifetime.

“I can't wait to see what happens next,” she added. “There's a lot more to come.”