The Category 5 hurricane is the highest on the Saffir-Simpson scale; Janice Dean reports.

With Hurricane Dorian upgraded to a Category 5 as it makes its way closer to Florida, businesses and consumers statewide are preparing for the worst.

As of Sunday morning, the storm was bearing down on the Bahamas while Floridians brace themselves and prepare for what could be an physically and economically destructive force of nature.

According to Global Director of Consumer Weather Strategy Paul Walsh, who uses weather and climate data to help businesses and consumers alike prepare for such natural disasters, forecasting the certainty of where Dorian will touch down is a lot more difficult than hurricanes of the past.

“We have an outsized amount of uncertainty with Hurricane Dorian. Today’s forecasting is very, very accurate, but the path of Dorian hitting Florida is within a margin of error. The forecast currently is taking storm 60 miles offshore of Florida, where it would still be strong enough to impact the (state’s) economy. But if it jogs to the left even just a little bit, we will see way more destruction and devastation.”

“The last storm that looked like this one was Hurricane Matthew in 2016, which occurred around same timeframe and was upgraded to a Category 5. It didn’t hit Florida directly and it still generated $10 billion in negative economic impact.” 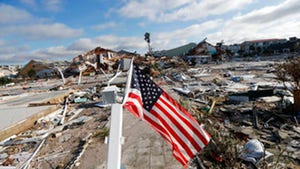 Hurricane season here as Dorian threatens Florida: A look at the costly toll of what they leave behind

As Hurricane Dorian approaches, FOX Business takes a look at some of the most devastating storms to hit the U.S.

“(Dorian) is a very uncertain storm, and that makes for negative implications on commerce,” he added.

Businesses nowadays are at a massive advantage when it comes to preparing for storms of Dorian’s magnitude, which in turn helps consumers to properly prepare as well, according to Walsh.

As Floridians statewide rush to supermarkets and gas stations to stock up on necessities, Walsh said modern technology, weather data and analytics will help prevent a shortage of those particular provisions needed during the worst of the storm.

In that sense, the economy can be affected in a positive manner, but depending on where Hurricane Dorian hits stateside, the cost of destruction could quickly outweigh the pre-storm retail rush.

“The first thing I’ll point out is weather predictions have becoming increasingly more accurate. Businesses have had plenty of advance notice to prepare for this storm.”

“From a retail perspective, stores need to know a few things in advance. What do people buy during storm preparations like we see with Dorian? How much of it do they buy during a time like this? The answers to those questions are married to the forecast, and with technology and analytics, retail businesses can put in place an ability to optimize those particular goods, which in turn helps people become more prepared for the storm as well.”

However, should Dorian hit Florida directly, the economic implications could be staggering.

Back in 2012, Superstorm Sandy caused $65 billion worth of damage in the U.S. alone. Hurricane Katrina caused a whopping $150 billion. And in those two cases, recovery time took years, or has yet to be fully recovered at all.

According to Walsh, determining the overall economic impact of a massive superstorm or hurricane depends on three separate phases.

“There are three phases of a storm like this on businesses. The first is the forecast factor, which is what we’ve seen the past three or four days, focusing on preparation for the storm,” he said. “And oftentimes, that forecast impact be bigger than actual storm. People take these forecasts extremely serious, as they should.”

The first phase sets about an economic stimulus, where consumers rush to retailers to buy provisions in bulk. What happens during the second phase, however, determines how damaging the storm will be financially and economically.

“The second phase is when storm actually hits, which in our case, Dorian will probably arrive in Florida late tomorrow night and into all day Tuesday. And the third phase is recovery, which can take months or even years,” Walsh said, citing Hurricanes Sandy and Katrina.

The National Hurricane Center warned residents of Abaco Islands in the Bahamas to take immediate shelter on Sunday as Dorian makes its way northward, with maximum winds increased to nearly 175 mph and gusts over 200 mph.

The worst of the weather for Central Florida will arrive around Tuesday evening and last through the night, with Hurricane Dorian already tied for the fourth-strongest winds in the Atlantic since at least 1950.