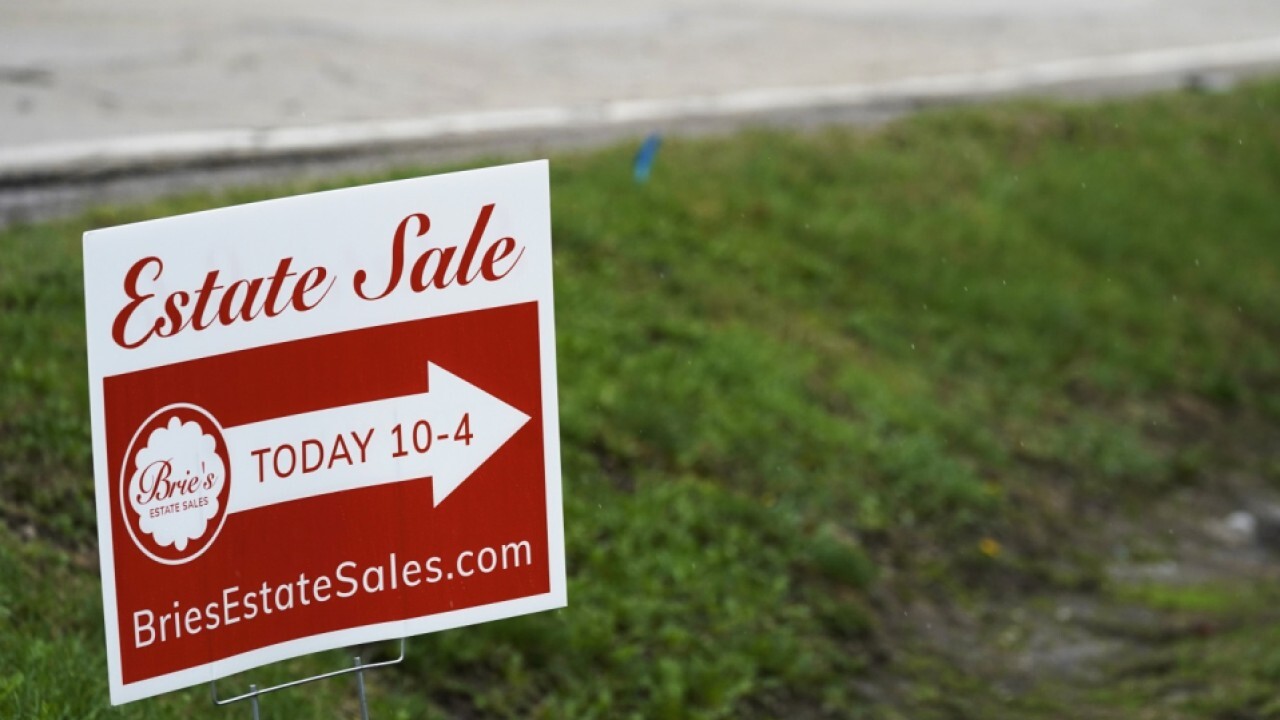 Homebuyers are doing things 'they've never done before' in order to get their offers to stand out. FOX Business' Gerri Willis with more.

Marvia Robinson was dead tired from a week of overnight long-haul trips when she nosed her Greyhound bus into the station in deep predawn darkness. Still, the 63-year-old driver kept a friendly lilt in her voice as she said goodbye to the riders filing past her and stepping off the bus.

"Rough night," she said minutes later, walking toward her Toyota Corolla in the parking lot. "I had to put two off in Tallahassee, for drinking, and then another one in Ocala." She longed to go home to sleep.

But she had no home to go to. Nineteen days earlier, Invitation Homes Inc, the largest landlord for single-family homes in the United States, had evicted her from the one she lived in.

Last year, as the COVID-19 pandemic brought the nation’s travel economy to a standstill, Robinson’s hours were. cut, her pay dwindled – to as little as $65 for one two-week period – and she fell behind on her rent. By January, she owed $4,920.38. So she emailed Invitation Homes to ask if it would accept funds from a county program that gives landlords $4,000 in back rent.

In an email response reviewed by Reuters, Invitation Homes told Robinson the company was not participating in the program "due to the landlord restrictions," without explaining what that meant. The company then sent Robinson an email with links to information about other government and nonprofit relief programs, as well as payday lenders, food banks, the Coalition for the Homeless and ways to make money by selling hair, plasma and donor eggs. On Jan. 8, the company sent Robinson a note asking for rent and additional fees, signing off with: "We’re in this together, Your Invitation Homes team."

On Jan. 13, Invitation Homes sued to evict Robinson. Two days later, Robinson filed a handwritten declaration with the Orange County civil court attesting that she qualified for relief under the U.S. Centers for Disease Control and Prevention’s national moratorium on evictions. That Sept. 4 order, reinforced by similar state and local measures, is meant to protect people who lost income in the pandemic from losing their homes.

In February, an Orange County judge approved Robinson’s eviction. On March 9, two sheriff’s deputies showed up at Robinson’s taupe two-story rental south of the city, bolted the doors and changed the locks.

Invitation Homes declined to comment on Robinson’s case. A spokeswoman told Reuters the company "preserves our legal rights" once it has "exhausted all other options" to challenge tenants’ CDC declarations.

As the coronavirus pandemic moves into its second year, Robinson’s case and many others like it reveal that landlords have persisted in pursuing evictions across the United States, despite government measures meant to keep tenants in their homes.

Comprehensive nationwide figures aren’t available. But according to the Princeton University Eviction Lab, 318,091 households have faced eviction proceedings during the pandemic in the 27 cities the research project tracks, including Phoenix, Milwaukee and Dallas. Many more remain vulnerable to eviction and possible homelessness: By May, an estimated 7 million renters across the country will owe $40 billion in back rent, utilities and fees, Moody’s Analytics estimates. Before the pandemic, about 900,000 households were evicted each year.

Most renters live in apartments or houses owned by small-scale "mom-and-pop" landlords, who often rely heavily on their rental income. But based on a review of hundreds of court filings across the country, as well as interviews with tenants, their lawyers and housing advocates, it’s the big, deep-pocketed corporate landlords with property portfolios spanning multiple states that have been the most aggressive in filing eviction cases, even as they have thrived in the pandemic.

Since the pandemic began, large corporate landlords have filed nearly 70,000 eviction cases in just 27 counties in seven states analyzed by the Private Equity Stakeholder Project, a Chicago-based nonprofit that studies the impact of private equity investments on the public.

FILE - In this Sept. 25, 2020 file photo, a "sold" sign sits on a lot as new home construction continues in Westfield, Ind. Mortgage rates fell for the first time in more than two months as buyers continue to be stifled by high prices and limited sup (AP)

Many of the big landlords, especially those focused on single-family homes, have benefited as higher-income families have fled to the suburbs for perceived safety and more space during the pandemic. Invitation Homes had its best year ever in 2020, with profits climbing to a record $200 million as occupancy rates neared 100%. Its share price has nearly doubled since March 2020.

Invitation Homes ranked fifth among companies seeking evictions in the seven states examined by the Private Equity Stakeholder Project, with 710 cases since the CDC moratorium took effect Sept. 4. Ahead of it were S2 Capital, a Dallas, Texas, investment firm, with 1,160 eviction suits; Ventron Management, with 1,134 cases against tenants in Georgia and Florida and which received $2.6 million under the federal Paycheck Protection Program; private equity firm Pretium Partners, which operates Progress Residential and Front Yard Residential, with 1,074 eviction suits; and Western Wealth Capital, with 1,018.

Invitation Homes, Progress Residential and Ventron Management said that evictions are a last resort and that the Private Equity Stakeholder Project’s data are misleading. Invitation Homes noted that "eviction filings do not equal actual eviction," and that the "vast majority are resolved with the resident staying in the home and no eviction on their record." Progress Residential said it and related companies "have not evicted any individual who is covered by a valid CDC declaration," but they "reserve the right to proceed in accordance with applicable law." Ventron Management said its eviction filings represent a small number of tenants and that in the majority of cases a resolution is reached.

S2 Capital and Western Wealth Capital did not respond to requests for comment.

Many eviction cases are pending, and some tenants may receive a lifeline from the $50 billion in rent relief approved by Congress. That aid has been slow to trickle out, however, and meantime, just fighting eviction can cost money that tenants lack. In many jurisdictions, even when a case is settled or dismissed, it remains on a tenant’s record, often making it harder to obtain housing in the future.

The CDC did not respond to requests for comment. Late last month, two days before the moratorium was to expire, the agency extended it to June 30. Companies that violate the moratorium are subject to criminal penalties of up to $200,000 per incident – and up to $500,000 if the violation results in a death.

The agencies said the probe was in response to media reports and complaints from housing advocates and state and federal agencies "that major multistate landlords are forcing people out of their homes despite the government prohibitions or before tenants are aware of their rights … Many of the tenants at risk of eviction are older Americans and people of color, who already experience heightened risks from COVID-19."

Rebecca Kelly Slaughter, the Federal Trade Commission’s acting chairwoman, told Reuters that there is no comprehensive data measuring the problem, but "bad conduct by large multistate landlords and private equity firms has an enormous impact on renters across the country."

And eviction isn’t necessarily the end of it. Two weeks after Invitation booted Robinson from her Orlando home, the company sent her a bill for $12,768.82. That included $8,854.30 in past rent, plus late fees, legal costs and a long list of charges to cover expenses typically shouldered by landlords to prepare a rental for new tenants, including landscaping, a battery for the smoke detector, garden mulch, plumbing work, new window blinds, pressure washing and painting.

"If payment in full is not made within 30 days," the letter accompanying the bill said, "your account will be referred to a collection agency and your credit may be negatively impacted. Thank you for your attention to this matter." The letter ended: "We wish you well in your future endeavors. Sincerely, Your Invitation Homes Team."

Robinson now lives out of her car and stays with friends or, when she has the cash, in a hotel. In early April, sitting in an Extended Stay Hotel that cost her $105 for the night, Robinson counted her worries. She had to pay to fix a flat tire. She had mistakenly moved into storage the oxygen tank she needs for her asthma. And she hadn’t been able to get a COVID-19 vaccine.

"It is very embarrassing and painful having to put all my china, furniture and artwork in three storage units," she said. "And this all happened because the judges are honoring their request for eviction and ignoring the federal ban."

Judge Duckworth provided no rationale for his decision in the court record. On paper, Robinson met the criteria to qualify for the protection under the CDC moratorium: Her income had been negatively impacted by COVID-19, she made less than $99,000 a year, and she had applied for rent relief.

In an email statement, Invitation Homes spokeswoman Kristi DesJarlais said the company does not comment on the cases of individual renters. In general, she said, "We reserve the right to challenge CDC declarations in cases where a resident has not paid rent over multiple months nor have they made any arrangements to pay rent, and where we have repeatedly offered such arrangements including mutual termination of lease with no financial obligation on the resident’s part."

Robinson said Invitation Homes never made her such an offer.