Search and rescue crews found one of two missing people after the upper floors of a construction project collapsed near New Orleans’ historic French Quarter Saturday.

The missing person was not alive by the time authorities reached them at the mangled Hard Rock Hotel construction site.

This aerial photo shows the Hard Rock Hotel, which was under construction, after a fatal partial collapse in New Orleans on Saturday, Oct. 12, 2019. (Chris Granger/The Advocate via AP)

Video showed debris crash from several stories up, landing on cars in the street below.

Emergency crews evacuated nearby buildings as a precaution, given one of the two massive cranes was considered dangerously unstable.

Footage shot from the ground showed people fleeing the area as metal fell from the sky.

According to contractor Citadel Builders LLC, which employs people on the site, more than 100 people were working at the building when tragedy struck.

A spokesperson said the company was working with officials to figure out how to stabilize the building. The company didn’t comment on a possible cause of the collapse. 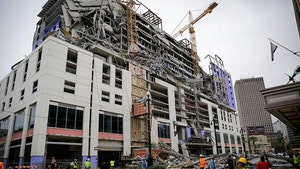 This was not the development's first setback.

In a statement released by Hard Rock International, the company expressed sympathy to the victims, explaining they licensed the construction to a third party, Kailas Companies.