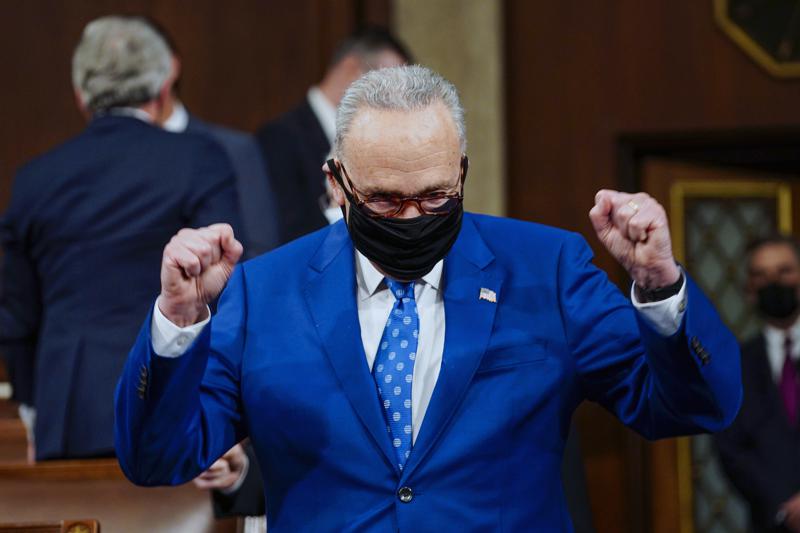 Sen. Barrasso: Biden sold out to progressives on infrastructure plan

Rarely has a routine water resources bill generated so much political buzz, but as senators hoisted the measure to passage Thursday the bipartisan infrastructure legislation served as a potential template for building consensus around President Joe Biden’s ambitious American Jobs Plan.

The Drinking Water and Wastewater Infrastructure Act of 2021 authorizes about $35 billion over five years to improve leaky pipes and upgrade facilities, and is widely supported by lawmakers and their states back home. This time, though, it could be so much more — a building block in Biden’s broader $2.3 trillion proposal to invest in roads, bridges and other infrastructure.

Still, the day after Biden’s address to a joint session of Congress outlining his sweeping proposals to reinvest in America infrastructure the path ahead is expected to be long and politically daunting.

With Congress essentially split, and Democrats holding only slim majorities in the House and Senate, Biden and the congressional leaders will soon have to decide how they plan to muscle his priority legislation into law.

The White House is reaching out to Republicans, as Biden courts GOP lawmakers for their input on the package and to win over their votes.

Biden spoke by phone Thursday with Sen. Shelley Moore Capito, R-W.Va., a leader on the water bill who is also working on a Republican alternative to Biden’s infrastructure plan.

They had a warm, friendly conversation, reiterating their willingness to negotiate, the White House said. They also discussed having another potential in-person meeting in the near future.

"We both expressed our mutual desire to work together and find common ground," said Capito, the top Republican on the Environment and Public Works Committee, in a statement.

Capito called it "a constructive and substantive call" and said she stands ready to "be a partner in advancing infrastructure legislation in a bipartisan way—just as we’ve done in the past."

President Joe Biden speaks to Sen. Dick Durbin, D-Ill.,, left, Senate Majority Leader Chuck Schumer of N.Y., center, and Sen. Patrick Leahy, D-Vt., after speaking to a joint session of Congress Wednesday, April 28, 2021, in the House Chamber at the U

BIDEN'S NEW SPENDING PLAN COULD GIVE WORKERS UP TO $4,000 A MONTH IN PAID LEAVE

But most Republicans are opposing Biden’s overall agenda as big government overreach. Together the American Jobs Plan and the American Families Plan, a robust investment in free pre-school, community college and child tax breaks, sum an eye-popping $4 trillion.

The water bill is an example of what’s possible, but also the gaping divide.

The $35 billion effort falls far short of what the president has proposed, $111 billion over eight years, for water projects in his big infrastructure plan. But it is in line with what Capito and the Republican senators proposed last week as their counter offer to Biden’s package, and could serve as a piece of that or starting point in talks.

"We know the next couple of weeks and months are going to be tough," said Capito, in a speech before the vote. But she said she was hopeful colleagues would "remember this moment."

The water bill is the kind of routine legislation that has been a mainstay on Capitol Hill, but that lawmakers have struggled to pass in recent years amid the partisanship and gridlock, and the power that party leaders exert over the legislative process.

Part of the exuberance among senators this week was over the very act of legislating, carrying the bill through the give-and-take of the committee process and onto the Senate floor for amendments and debate.

"Maybe we can take the Biden infrastructure plan and do the pieces of it," he said. "Where we can get some agreement, do those together. And then the remaining things that we think need to be done, that price tag shrinks a little bit, because we’ve done some other stuff."

One reason the water bill easily passed was because it’s routine government spending. Another reason is that the price tag was tiny compared to typical congressional budget spats. Few expect such harmony to last when the stakes get bigger in the months ahead.

Senate Majority Leader Chuck Schumer of N.Y., arrives to the chamber ahead of President Joe Biden speaking to a joint session of Congress, Wednesday, April 28, 2021, in the House Chamber at the U.S. Capitol in Washington. (Melina Mara/The Washington

Biden’s infrastructure plan proposes a tax hike on corporations, reverting the rate from 21% to 28%, as it was before the 2017 GOP tax cuts. That is a nonstarter for Republicans, who are unwilling to undo the signature Trump-era achievement.

Sen. Roy Blunt of Missouri, a member of GOP leadership, said the water bill could certainly become part of a bigger infrastructure package, "one of the building blocks going forward."

But he cautioned, "It’s apples and oranges compared to the President’s infrastructure bill."

The increased spending called for in the water bill goes to two longstanding programs that work like infrastructure banks — one for drinking water and the other for wastewater. Each program is set to get up to $14.65 billion over five years under the bill. It is expected to be paid for with routine government funding.

Supported by a broad range of interest groups, the bill enables water and wastewater systems around the to country use the money to fix leaky pipes, construct storage tanks and improve water treatment plants, to name just a few uses.

The bill also includes an array of grant programs, including to reduce lead in drinking water, turn waste to energy and make water systems more resilient to flooding and other extreme weather events. More than 40% of the bill’s investments are targeted to low-income and rural communities.

The bill’s chief sponsor, Sen. Tammy Duckworth, D-Ill., said she remembers a House hearing a few years ago, when a mother from Flint, Mich., held up a baby bottle filled with murky brown water from her tap.

"While Flint was a tragedy, it was not an anomaly," she said. Lead-service water lines were banned decades ago, but more than 6 million homes across the country get water from lead service lines, including Illinois.

"We can’t only pour money into fixing our roads while failing to repair the pipes beneath them," Duckworth said.

The federal government plays a small role compared to states and local governments when it comes to public spending on drinking water and wastewater facilities — less than 5%.

But, in hearings, local utility officials testified that the pandemic has exacerbated the financial strains they face in replacing aging pipes and other infrastructure. They called for more federal investment to prevent rate increases down the road for communities that can least afford such hikes.

Meanwhile, House Democrats are pursuing water infrastructure bills with price tags that go beyond what the White House has proposed, making clear that a compromise just on a relatively narrow public works upgrade focused on water is still a ways away.